Not Quite Charing Cross

Charing Cross Rd. is one of my favorite streets in London. Not quite a grand promenade, not quite an alley, it's a book seller's street with one book store next to another as far as the eye can see. It's a book lovers' dream. Something for everyone. Some stores are of general interest, some of special interest (Walt liked the book store that sold only map books and old maps; I liked the show biz store and bought two biographies of James Mason there on one of our trips). Most are little hole in the wall stores, with one room filled to the ceiling with piles of books, and Bob Cratchit himself sitting at a desk watching as you check out his wares. They really are all just like the movie 84 Charing Cross Rd., which I loved so much. 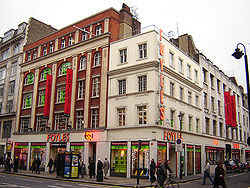 It's quite a contrast from the nearby Foyle's bookstore, once listed in the Guinness Book of Records as the world's largest bookshop in terms of shelf area (30 miles/50 kilometres) and number of titles on display.

Book stores, new or used, are becoming a dying item. We haven't quite come to Fahrenheit 451, but with kindles and audio books, and a decline in reading in general, how many more decades will used book stores find clientele?

When Borders moved in to Davis, two book stores were pushed out. One remained and has actually outlived Borders, which closed last year. Two lovely used book stores closed during the Borders era and I'm not sure about the third. 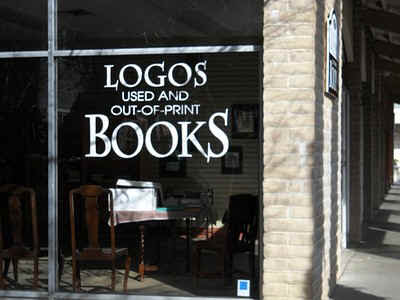 Into this fading market has come Logos Books, a used book store run by Susan and Peter Linz.

I met Susan long before she and Peter decided to open their store. She is Charlotte's cousin...or second cousin, or kissing cousin or something like that. Daughter of Charlotte's cousin. On one of her rare trips to Davis, Char and I went to lunch at Susan's house, which may have been the first time I met her. I found her to be a lovely woman with a wonderful sense of humor and entirely too organized house, and a woman who put together a mean ladies' lunch.

Some time later, Char heard that they were opening this book store and shortly before their official opening celebration, we stopped off to see the store. It had very few books at that time, but we had a lovely visit with Peter and learned about the philosophy of the store, which I love. They aren't in it to make money, but only wanted to cover their expenses and any profits they made would be donated to charity. This was a project to help Peter fill his time in his retirement doing something he loved to do, which was to work with and around books and to meet other people who loved books.

After Char's mother died, she gave me several bags of books, which I took to the store to donate. I was happy to see that business seemed to be going well and that the shelves were more fully stocked than on my first visit.

Some time in December, a local on-line Davis magazine did an article about the shop and about Susan and Peter and said they were looking for volunteers to help work the store. I wouldn't have paid attention if I hadn't known Susan, but I read the article and that they were only looking for volunteers for something one day a week, or one day a month--just enough to give them a little break. So I volunteered.

Susan and I communicated when I was in Santa Barbara and she set yesterday as the day for my training. What fun. It helped that she started by saying "there is no way you can break anything." Then she went on to give me a tour of the small store and the shelves, which vary by the books which have been donated (at present there is no shelf for erotica, because they only have two donated books, which are shelved up high enough as to not attract the notice of young people).

Their love of books and encouragement of reading is particularly evident in the children's "room" (really just a closet) where the books are divided by age appropriateness and there is a basket for "kids who are still at the chewing stage."

I went through my orientation and screwed up my first sale, but it only affected me, not anything/body else. But I start volunteering next Tuesday and will be working once a week. I already have my eyes on several books I want to read. I hope nobody comes in to shop. :)

What great fun! I hope you have better luck than I've had with the cash register. I remind myself of Auntie Mame and her trial work in the department store.

I so envy you your visits to Charing Cross Road. The book was my favorite (and my mother's) long before the movie was made. They're both fabulous!

That's the kind of volunteer work I'd love to do. (Once a librarian, always a librarian...) No such place around here, however.