Back to San Rafael

I spent about 2-1/2 hrs with author Tess Gerritsen today. Technically speaking, I guess I spent the time with Susan Erickson, reading Gerritsen's "Girl Missing," the audio book I was playing while driving to my mother's today. Reviews from Audible.com are that people are upset to learn this is an old book, not a new one. I don't care. I'm enjoying it, old or new. I'll have another hour with it tomorrow, driving to and from my lunch in Sacramento.

So. The visit with my mother. Good and not. She's grumpy because her back is really bothering her. It is so frustrating watching her suffer, knowing that the doctor has told her repeatedly that there is nothing that can be done to help her. Essentially her coccyx has outlived its usefulness and is disintegrating. As this is where all of the nerves end, it causes great pain and she is unable to stand on her feet for very long. Now it's starting to wake her up at night. I asked the doctor about acupuncture and she told me that it wouldn't work. And because it's nerve pain, there are no pills that will help.

Sadly, the pain is making her grumpy and she feels "dumb, dumb, dumb" because she can't make it go away. It embarrasses her to have to sit down when she volunteers at the Hospice Thrift Shop and she doesn't want her friends/co-workers to know that there is something physically wrong with her. Sigh. Pride can be such a self-destructive thing.

She asked me to get her a cup of coffee today because her back was hurting her so much that it hurt to walk, and when there were no cups where they were supposed to be and I made the mistake of asking her where the cups had gone. She got up and walked all over the house trying to find her own cup, instead of telling me where she thought she left it. Sigh.

We had a nice visit, sticking to the same topics we always discuss. She seemed to be more "with it" than usual and when she again told me about her mother's problems with speech before her death, I decided to try telling her about the book I'd read about aphasia. But when I finished, she went back and told me the story all over again.

There was some other thing I made the mistake of trying to tell her and after a brief silence, she talked about how disgusted it makes her to look at her "filthy" rug and about all the places where it just turns her stomach to look at it and how she needs to have someone come in and shampoo. But she won't ask someone to come in until she has moved all of her stuff and her back hurts too much to do that. I'm thinking that maybe for Mother's day I can get Ned and Walt to come and help me move stuff for her and pay to have shampooers come in and get the job done.

The rug is, of course, cleaner than any rug I have ever had and I can't even see the spots that disgust her, but all she sees is filth.

But all things considered, things pretty much went well and we had a nice lunch and a nice visit. I also helped her clear away some books. She is so eager to get rid of "all this junk" around her house and I realized that I could take a big bag of books home to give to Dr. Herbert Bauer on his 102nd birthday. He is a voracious reader, who reads a book a day and will read anything. There is a project going in Davis to collect 102 books to give to Herbert on his 102nd birthday, so I cleared away the equivalent of one whole shelf of books, which made my mother very relieved!

I was feeling very "antsy" on the ride home and had to make a stop just to shake the kinks out of my legs, so I decided to wander through Michael's craft store. Always a bad mistake. But I did get some cute things I'll be using soon, including a book of Peter Pan which I can easily take apart and send to one of my Compassion children in chapter form (since what you send can't be thicker than 1/4")

Then I stopped at the book store to pick up the camera I'd accidentally left there yesterday so I could finally post this photo: 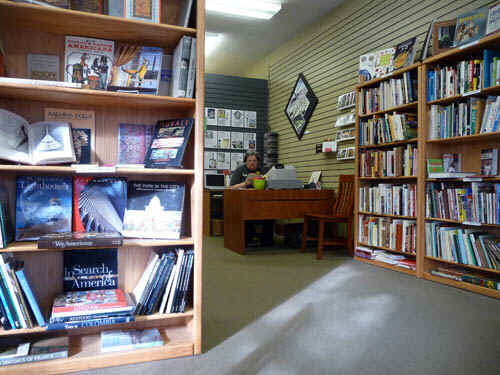 The plan had been to go to an Indian restaurant that I had bought a Groupon for, but when I went to print it, it was not in my Groupon account, so I had to send a note to customer support to see how I get it back, and then find something to cook for dinner here!
Posted by Bev Sykes at 12:43 AM