"STOP DOWNLOADING!" came the anguished cry from Walt, who had just checked our usage on Verizon's web site and discovered that I had completely used up the entire 300 mb of data allotted for the month of January in only two days.

This made absolutely no sense to me, but I checked the chart and there it was--almost zero usage for Walt and 297 mb of data for me. In two days. But the chart that showed usage didn't make any sense. I hadn't done THAT much on line, I hadn't thought. I think of myself as a "light" user, though of course in these early days, I am doing much more, trying to learn the machine and set it up, but most of the work was done off line.

The biggest thing we found out was that all the time I thought the contact was going through our wifi, it actually was using the internet connection. Wifi = free, internet = counting down time! We tried and tried to figure out what happened. I had given Walt the password for our wifi and he got in just fine, but when I tried, it would connect, say it was accepted and then immediately disconnect. I was ready to go to the store and demand that they remove all the time from my phone because obviously there was a defect.

When I gave Walt the password, I mentioned that I couldn't remember if it used a certain punctuation or not...sometimes I use it, sometimes I don't. I thought it did. Well, he got in right away and I didn't. After 24 hours, trying to figure out why it took the password for Walt and not for me, I decided to cancel the connection altogether, install it again and try NOT using the punctuation. Voila! I was in. I was now working off the wifi. Walt said "Oh yeah--I didn't use the punctuation." Sheesh!

Anyway in the intervening hours of frustration, apparently Verizon had logged a billing because instead of using 297 mb of data, it now showed that I had used only 3 mb. Apparently crisis averted. I'm still not convinced that Verizon won't own our house by the end of the month, but we're monitoring it!

In the meantime I have gradually, and very slowly, begun whittling away the "problems" I thought I had. I finally figured out that the little button on the bottom left of the screen, which is supposed to bring up options, brings up DIFFERENT options for each app you are using. Thus, while I was frustrated because I could not get a full Google Calendar to display, it turns out that if I push the options menu gives me that option.

I also somehow managed to sit somewhere where the GPS can find my position. Not sure how that happened.

Again, using that handy little option button, I was finally able to create and send e-mail instead of just reading what was in my in-box.

And after mistakenly sending a photo of Walt to Facebook, that I meant to send to Jeri, I think I finally did send it to Jeri.

Walt decided he wanted to take a picture of me playing with the phone and send it to the kids and while he was trying to figure out how to do that I took HIS picture and did the same thing. 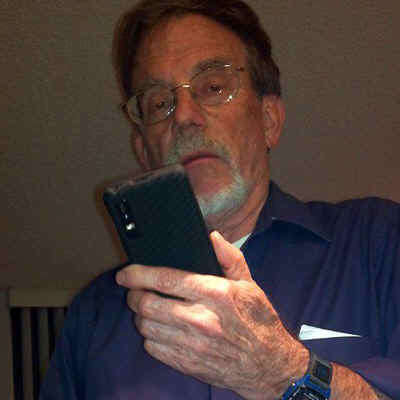 I told him we reminded me of that old couple on the viral video that are trying to figure out how to make a Skype call. 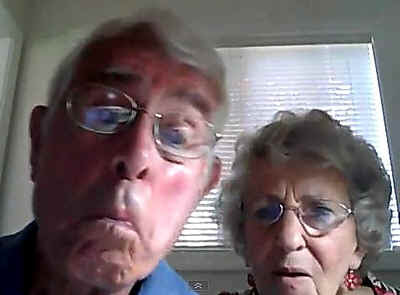 I spent the entire afternoon trying to update my Google contact list. I've managed to reduce it from >1600 to >1000, no mean feat. Who are all these people anyway and how did they get on my list?? But I'm only in the Ks at the moment, so there are miles to go before I sleep--and lots of unknown contacts to kill first, as well as eliminate four of the five e-mail addresses that some people have and only keep the current one.

I was able to set quick dial numbers and I learned how to make personalized ring tones work, so I can get those back again, though I can't quite do it yet because somehow I erased the one I installed (which worked) and I haven't had time to go through the steps and recreate it.

At some point this afternoon, I found a book called "Droid x2 for Dummies" and I got the Kindle version of it. It's very good--I knew it was for us when it warned against putting your cell phone in the washer and then talks about the machine dozing "just like Uncle Walt after Thanksgiving dinner."

Unfortunately, I began to share little tidbits like that with Walt, who decided to borrow the Kindle while I was cooking dinner. As I write this, several hours later, he is still reading it. But his cell phone is a Droid 3, which is slightly different from the Droid x2. I checked Amazon and found that there is a "Droid 3 for dummies," so he is (eventually) going to order that and we will each have our own "for dummies" books for our respective smart phones.

I also learned that Ashley also has a droid and at some point we may get together and let me see what wonderful things I can learn from her.

It's Day #3 and I don't love it yet, but I'm liking it a lot more. And it's nice that most of the concerns and questions I had I have been able to answer...eventually.

Email ThisBlogThis!Share to TwitterShare to FacebookShare to Pinterest
Labels: Droid

I discovered, most annoyingly, that certain sites scan your address book when you join -- and I spent a couple of hours cleaning that out. It's not what I'm here for.

I wish you luck with V'zon. I couldn't get them to discuss anything even when there was an obvious error. I closed that account, had a credit balance, and they didn't know how to give it to me. On general principles, I won't deal with them again.