Wow. It's been more than a year since I wrote about bottle feeding puppies, puppy pee, puppy poop or puppy breath! Haven't you missed it?

Puppies need body contact. Put 4 newborns at 4 corners of a box and they will very quickly find each other, even though they are blind and deaf at birth. They crave the warmth of their siblings. As they get older, they learn how to interact. Even before their eyes are opened, they are batting at each other, blindly...but they know a sister or a brother is there.

When I had mothers with puppies, I studied how they were with each other. The puppes are constantly kneading her side while they nurse, they act frantic and move from one teat to another, climbing over siblings in their frenzy to get to the food. Buddy acts the same way with my hand when he's taking the bottle.

The mother is always grooming them. She washes them all over and it is from her tongue licking their genitals that they learn how to relieve themselves.

Well...I do draw the line at licking the genitals, but fortunately Buddy arrived here with opened eyes and working genitals, so that wasn't necessary. But I really feel the need to give him the body contact that he should be getting from his mother and siblings.

With the other puppies, I could put them in a big cage together and, when they got older, add a fence to double their free range. But I can't really do that with Buddy. He sleeps alone, of course, but when he is awake, he hasn't learned how to play with toys and he craves contact.

These days I feel like Konrad Lorenz, who studied imprinting in young animals, and how they learn a lot of their behaviors from their parent. I think about Lorenz whenever I am near Buddy, who immediately lifts his head and runs after me, literally "dogging" my footsteps. When I'm sitting, he comes and rests his head on my foot. When I'm working in my office, he sleeps alongside me. For a "big sleep" he goes into the crate (I don't usually lock him up any more, unless the other dogs are eating and he runs the risk of their wrath if he gets too close) and sleeps on the furry stuffed dog that came with him (this dog isn't being mothered by my white mother teddy bear). He pulls it out of the crate to play with and then sleeps on it when it's nap time. 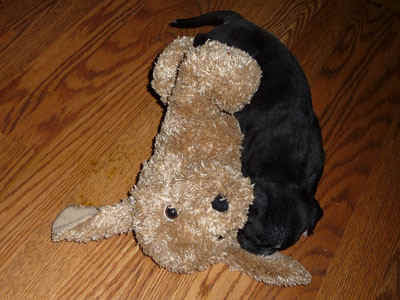 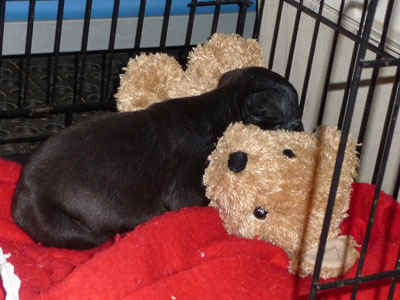 When he sits in my lap I talk with him and he looks at me so intently it's almost like he understands (of course I just finished reading a book about a dog who lived many lives, so I'm more likely to think that at the moment!)

He has pretty much free run of the house, which means we are back to policing for puddles and what passes for puppy poop at the moment (runny and icky). But I am going to be getting some puppy kibble tomorrow and will start introducing that to him and that should firm things up quickly.

Unfortunately, Polly, the alpha dog around here is starting to exercise her dominance. She sits in Walt's chair and growls at Buddy when he's eating. Tonight Walt found her humping his head (which is all about dominence and nothing about sex) and when I tried to sneak out and see her, she came running toward me, cowering, as if she knew she had done something wrong and was convinced I was going to punish her.

Don't know how long Buddy will be here, but he won't be ready for injections (prerequisite for going up for adoption) for about 3 weeks yet. That's a lot of puppy poop under our feet in the interim. Good thing he's cute. 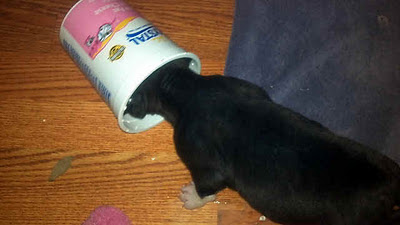 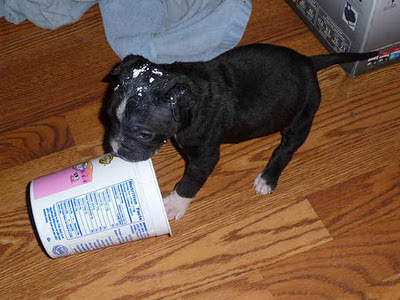 Yes he is a cutie and you take on alot my dear . Like i will say in my letter to you I dont want any more animals except for the dogs that I have .

While I am glad that our "puppy" is 6 years old now and past a lot of that, he IS awfully cute. It *almost* makes me wistful for those bygone days (almost).