It's a lot more work mothering a singleton puppy. Buddy is getting older and more able to do things and he doesn't need a bottle any more, but I'm realizing that with no mom and no siblings, and still too young to be put up for adoption, he really needs hands on mothering. He follows me everywhere, usually firmly attached to the cuff of my pants, me either dragging him along behind me or trying to avoid stepping on him if he decides to tug in front of me.

He has obviously identified me as "mom" because when Walt picks him up and tries to cuddle him, he only wants to wrestle, to growl, to bite...not angrily, but all as rough puppy play.

I won't let him do that to me. The first growl and he goes back on the floor. Sometimes I have to put him on the floor twice, but by the third time he may mouth my arm, but doesn't bite, never growls, and settles into my armpit to go to sleep.

I started thinking about how all those litters of pups cuddled up to each other. They play-fought with each other and they learned acceptable limits from each other. Buddy doesn't have siblings. He needs to cuddle up to the nearest thing he has to a mother. He's so cute because before he sleeps, he sits there just staring at me, like he's trying to memorize my face (or figure out why his mom looks so weird, so unlike other dogs).

Then he sniffs and licks my face. Polly, who hates having him around, but knows that she has to leave him alone, sulks on the other side of me, every so often giving disapproving grumbles, but as long as he stays on one side and she on the other of the great divide that is my abdomen, things go all right. 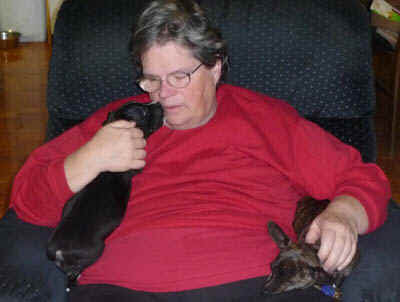 Then Buddy finally settles down and will sleep with his head either on my chest or buried in my armpit, making little sucking noises, until I finally have to get up. 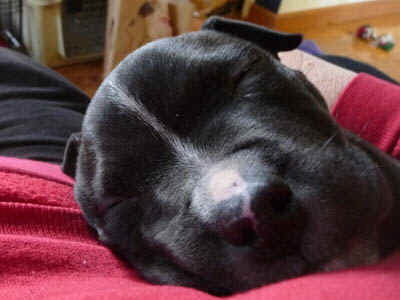 It's the little nursing movements he makes at times like these that made me realize that he is really too young to be left to his own devices, no matter how good he is about it. So I am now factoring in a couple of hours a day to sit and watch TV and let Buddy pretend he has a Mom. It's actually very nice.

Last night when I thought he was out for the night (he does sleep in a bed alone all night long) I was in my office working. Earlier in the day, Buddy had managed to climb up the footrest and get himself into my recliner and seemed quite proud of himself, as he knocked things off of the table next to the chair and then settled in for a nap. 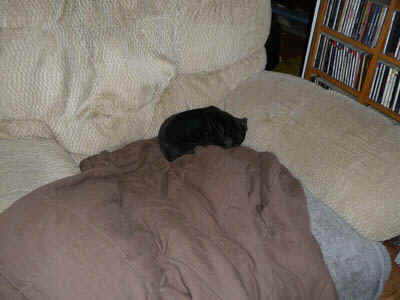 Apparently he tried getting into the chair again last night. Polly was sleeping there and next thing I knew there was a great commotion, with lots of yelping and whining from Buddy. I went in and picked him up and he put his front paws around my neck, his head down into my chest and literally whined and sighed as if he was so glad Mom had come to make him feel better.

I let him sleep in my lap for an hour and then when I put him in his bed, I put a bathrobe that I wear, which must smell of me, over him. He stayed asleep all night. This period of time in his life is very short, I realize, and I think that what I'm doing will help him be a better adjusted puppy when time comes for him to look for a forever home.

If I'm Buddy's mom, does that make me a bitch?

Email ThisBlogThis!Share to TwitterShare to FacebookShare to Pinterest
Labels: Buddy

Oh wow do you think you will be able to let him go when time comes ? LOL !!! It is very hard and you will cry take it from me who just had to make such an adjustment it was heart breaking and I thought my heart would never recover , but I can honestly say it does get easier .

If ever there was proof that siblings need each other, you have it there. Human siblings benefit from it as well; I've never been convinced that every child needs a bedroom of his/her own, just a place to be alone once in a while.

Oh that video is just too sweet!

Not to worry. I won't have any problem letting him go. It's like being a grandparent, getting the best out of the kids, but then handing them over to someone else when they start to become too obnoxious.