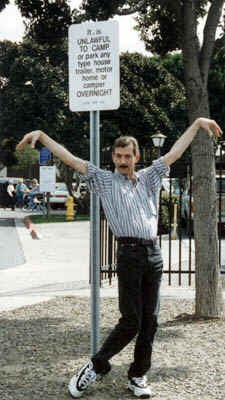 January isn't over yet and we have already learned of the death of a second friend.

I met Mike Kelley first on line in one of the CompuServe forums back in the late 1980s. He and his husband Bill (who, we learned later, through comparing genealogy records, was a very distant cousin of mine) were both active in the Gay/Lesbian Issues forum (Section 17), one of two forums I was most active in (the other being Women's Issues, Section 16).

I never had much to do with him on line, but of course read all the stuff he posted.

It was probably 1994 or 95 when Section 17 had its first social gathering. Walt and I joined the group in Reno for a weekend and that was when I met Mike and Bill for the first time. It was no surprise that he was ascerbic and funny and...yes...campy. I enjoyed being part of the group. 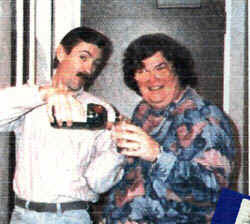 Mike loved to party and Tanqueray was his beverage of choice--he was kind enough to share some with me in Reno.

Someone on line had once called Mike a "hateful old cow" and he adopted the moniker and made it fabulous. He was "the Hoc" and he had the largest collection of cow crap. Everybody gave him things in a cow theme. Naturally, I carried it to extremes. I sent him a cow mailbox once and Walt and I bought a lawn ornament in Maryland that had to be disassembled to fit in my suitcase.

Everyone in that group was so supportive when David died. They were very solicitous when Walt and I joined them in Las Vegas in 1996 to celebrate the 50th birthday of Merrell Frankel (who left us in 2010). The highlight of that trip was a tour of the Liberace museum. Trust me, you haven't lived until you've gone through the Liberace Museum with a group of gay guys!

In October of 1996, we went to Washington DC for the last display of the entire AIDS quilt and for the candlelight march from the capitol to the Lincoln Memorial. 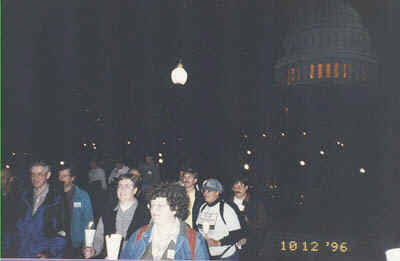 Somewhere there was also a trip to San Diego with the group (where the "camping" picture above was taken).

Then there was the month I spent with Mike and Bill in Houston, after Bill had been released from the hospital and Mike was afraid to leave him home alone, because he didn't want Bill to die while Mike was out. So I moved into their house and cooked and cleaned for them. (Houston. July. Was I insane?) A big part of what I did was to carry Mike's laundry to the laundromat...he had a huge collection of white t-shirts with various logos on them and sent a bunch out to be cleaned each week.

I returned to Houston a couple of times after that but Mike and I had a disagreement on my last trip and though I continued to communicate with Bill until his death (I spoke with him on the phone the morning of the day he died), I didn't really hear much from Mike.

He went through an "event" that nearly killed him -- I'm still not sure what exactly happened and what the aftermath was, but he was forced to leave his job because he couldn't handle it any more.

We became Facebook friends, when all the Section 17 people were gradually finding Facebook. I was, quite frankly, surprised to see photos of him because he had aged so much and didn't look like the Mike I knew. (But then I'm sure I had too!)

I think of Mike and Merrell and Bill all fit and healthy and together again, maybe laughing the way they always did, and it makes me smile, but with a little tear in my eye too. 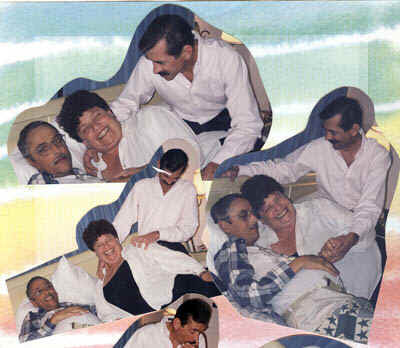 So sorry for your loss .