I didn't realize that it was going to cost me money to volunteer at the book store. (I had a couple of photos for this entry, but left my camera there, so...owell!)

Today was the big day, my first day at work, and I was nervous, realizing I had already forgotten everything I thought I had absorbed so well at orientation. Not that there is much to learn, but it did involve a (very simple) cash register and a credit card machine. As I was mentally reviewing things, nothing came back.

I wasn't really worried. As I said, this is a very small store, extremely low key, and Susan had assured me several times there was nothing I could do wrong. Well, probably almost nothing.

I had a plan in place for how to spend my day. This is not like a Borders, with lots of clients milling about. It's very small and I expected that there would be lots of down time. I had seen a copy of "Greyfriars Bobby" on the shelves in the older book section during my orientation. I remember the story of the little Scotty dog from our days in Edinburgh and I figured this would be a good book to read during the down times.

I packed two bottles of water in my new insulated lunch bag (purchased at a fund raiser for Brianna's school), since I had noted no water cooler or little fridge in the back room, and off I went. Walt had to drive me because there is nowhere to park downtown for longer than 2 hours (I hate downtown parking rules!). He said he didn't mind. There may come days when he is not available to drive me and I may have to, after nearly 40 years in this town, learn the bus system.

Susan was not there when I arrived, but her husband Peter was behind the desk and greeted me warmly. He got up and let me sit behind the desk, and reviewed a few things with me. We even did a sham charge on the credit card machine (if you charge one cent, it doesn't go through). There was a customer already there and Peter let me handle the sale...turns out the guy is someone I've known forever, but I don't think he recognized me and I was only 99% sure I recognized him, so we did not exchange familiarities.

The first sale went all right and I was feeling confident so Peter went into the back room to do some book sorting and left me to my own devices. It was time to go and get "Greyfriars Bobby." Argh! It had been sold!

Obviously I was going to have to find something else to read. I drifted over to the cookbook section ('cause I always check out cookbooks, even though I rarely use them any more) and my eyes lit up when I saw the John Steinbeck House cookbook. Steinbeck's birthplace and boyhood home was turned into a restaurant in 1974, the 72nd anniversary of the author's birth. I probably learned about it sometime in the 80s, since that was when I fell in love with Steinbeck's writings. I have been saying, off and on, since then that I wanted to visit the place some day. (There is now even a Steinbeck Center that I also want to visit, which I think about every time we zip through Salinas on our way to the Burger Queen).

But here was the Steinbeck House cookbook, with wonderful photos and great recipes. It was only $3.50 and I decided I would charge it, so I could get practice charging a real purchase. It was then that I realized that working in a book store might be like putting a not-quite-in-recovery alcoholic in charge of the bar at the nearby Irish pub!

I went looking for a small book I could read while I worked -- I figured that if I were going to sit in a book store, I probaby shouldn't be reading on a Kindle. I wandered over to the biography section and saw a thin volume of excerpts from the diary of Samuel Pepys. I first encountered Pepys in the Museum of the City of London was was naturally drawn to anybody who was a journalist. I'd always wanted to read some of it. I sat down to check the book out.

The first chapter dealt with lots of money stuff I couldn't really follow and I was about to put it back when I encountered "Deb." Deb was Pepys' wife's maid, a comely lass who apparently caught the author's eye. He writes about her in French. Like "she come into the coach and je* did baiser her" and "I did speak to her and she to me, and did get her pour dire me ou she demeurs now, and did charge her para say nothing of me that I had vu elle, which she did promise."

Anyway, it goes on about his infatuation, the brief encounters, his wife's discovery of the infatuation and how she reacts, to insisting he dismiss the maid and then making sure that he never goes anywhere unaccompanied.

What was strange about this was that at the time I was reading about Pepys and his extramarital liaison and his difficult relationship with his wife, two men were in the store comparing notes, first about their children's schooling and then about their relationships with their wives (one had divorced, apparently NOT amicably; the other seemed to be in the negotiation phase with his wife and things did not appear to be going well). I smiled as I realized that really nothing has changed much in male-female relationships since 1660!

Throughout the day I saw more people I knew -- a woman from the SPCA and an older married couple from our days with Acme Theater company. There was enough business to keep me from being bored, not enough to make me feel overwhelmed.

Susan came in to be with me in case I needed her help, but kept herself working on the books that had been donated, pricing them, and putting them on shelves. We had several lively discussions, one of which has ruined Char's reputation with her extended family (as I shared some of the crazy escapades Char and I had engaged in in our youth), and another comparing reasons why both of us have left the Catholic church.

Many of the customers were interesting, including a professor, originally from Ireland, but who teaches German at the university . He made the largest purchase of the day ($36). This guy and Susan had lively discussions about books I had never read and I realized how being well read could make all the difference in this kind of work!

A woman demanded to talk with Susan personally because she had found two books on the $1 sale table outside and she felt that they were important enough books that they deserved a place indoors in the Literature section, for sale at a higher price. Susan placated her, telling her it had nothing to do with the "worthiness" of the writing, but on the condition of the paperbacks. The woman left mollified, I guess.

The time really flew by. Around 5, I let my eyes wander through the cookbook section again and found two more books I liked. I was going to buy them, then put them back, then took them out again and ultimately bought them. By the end of the day, my volunteer job had cost me about $10 and I had seen lots and lots of other books that I could easily be talked into buying.

Obviously I am going to have to exercise restraint in this store, but I'll only be there 4 hours a week, which should be a help.

All things considered things went well. I just wonder what is going to happen if Susan and/or Peter check the cash register tape and discover the $1,600 sale I mistakenly entered when my elbow hit the wrong keys on the machine! (Fortunately they don't use the tape for anything important!) 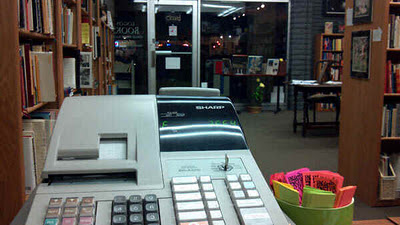 I'm ashamed to say that I read my Kindle while I do my 3-hour shift at the bookstore at our downtown library. Ironic, I know - and only one customer has ever commented on it.

I may eventually read the kindle. Good excuse to finish all those books!

Such temptation! I would have to leave my credit card home!