Of course there was a pinata. This was a gathering of pinata people (and others). Of course we had a pinata. 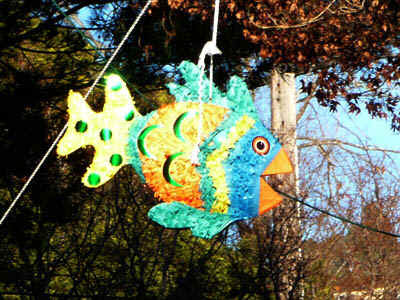 Actually, when I first mentioned it to Char, I thought I was joking, but she took the idea and ran with it.

It was at my mother's when I was talking about Concetta's death and realized that there was going to be a funeral and nobody had mentioned a pinata. I sent a message to Char and she said she would talk with Concetta's daughter about it. Next thing I knew, her daughter thought it was perfect, Char had found a pinata and stuff to put in it and we were on...a funeral mass, followed by a lunch and a pinata. Concetta would have loved it.

It was surreal. I walked into the Newman chapel and saw Concetta's open coffin at the front door. I don't think I've ever seen an open coffin at a funeral before, especially when there had been a "viewing" a couple of nights before. In fact, it seems odd to be burying people in coffins at all these days...so many people are cremated.

But she looked peaceful and I hugged one of her daughters and made my way to the pinata area. I noted that people in the 2nd generation were seated toward the back and those of us in the 1st generation were in the front pews on the side. It's so hard to express how much I love this group and how I love how we just always gravitate to each other. In fact, Liam had flown in to Sacramento last night, staying with his brother Kevin and Ned had dinner with the two of them. 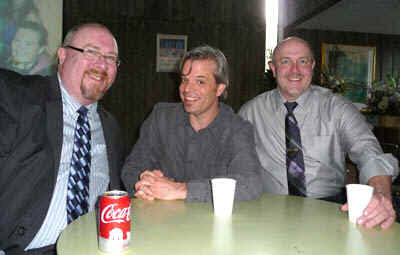 It warms the cockles of my heart when stuff like that happens.

Church has changed since I last attended. People all around me had bottles of water (I, who always has water with me, had left mine in the car). Children were eating snacks.

I'd forgotten how much I hate that building, Newman Hall in Berkeley. I worked for the building committee for awhile, and lived across the street. But I never liked the cold concrete structure. It seemed, somehow, even colder with the body of Concetta lying in that covered casket.

It was a funeral Mass and many people participated in readings. The only people in the Pinata group 1st generation who went to communion were Mike (who helped distribute communion) and Walt, who couldn't pass up the chance to get communion from Mike. We have obviously instilled more of religion in our children, some of us, as more of the 2nd and 3rd generation attendees were in the communion line.

Char and Jeri (Liam and Kevin's mother) gave a eulogy from the Pinata group. I have posted the video here, but the sound quality is not great (better for Jeri than for Char, so stick with it if you can't understand Char) and those who don't know the Pinata group or Concetta probably won't be interested, but I posted it for all of the Pinata group who were not able to make it. It was emotional but both of them did a wonderful job. 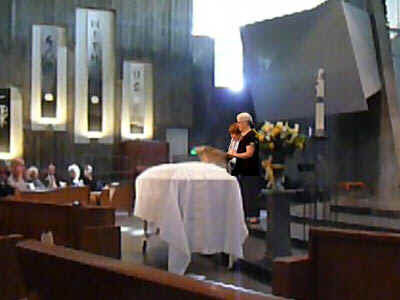 Our friend Phoebe read a beautiful poem Concetta had written in 2000, which ends

There was a lunch -- no ham -- and people started leaving. I thought they had decided not to do the pinata, but then there were Liam and Kevin out on the patio putting up the pinata, as their father had done so many times in years past. 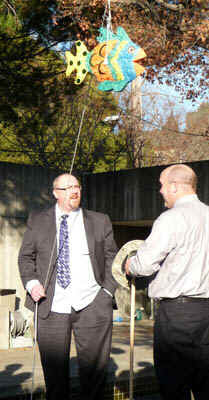 In fact, the first funeral pinata had been at their father's memorial service several years ago. It was when the torch (or in this case the stick to hit the pinata) had been passed to the younger generation.

After our very first pinata, which was the hardness of concrete and had to be broken with a hammer, we joke about not being able to break the pinata. Liam and Kevin had assured us that the two of them could break anything if need be, and Kevin promised to bring a hammer just in case.

But there was no need for a hammer. The kids lined up, as they always did, smallest to biggest -- only these were the third generation kids, and I didn't recognize most of them.

The little guys made tentative whaps at the pinata and the older the group got, the more "hearty" the hits became. Char's granddaughter, Haley, is a force to be reckoned with.

I can't remember which child finally broke it, but somehow there was some poetic justice in the fact that the son of Eric, Concetta's oldest son, never got a chance to hit it. Eric always broke the pinatas when our kids were younger.

So we have said goodbye to another friend and we have had a pinata and life goes on, a little less rich for the person who has left it. As we were leaving, Concetta's daughter said we need to have a happy occasion to get together, since we seem to be showing up at more funerals than parties these days (funerals for both Char's and Concetta's mothers in the past couple of years, and now for Concetta herself).

I just kind of feel numb tonight.
Posted by Bev Sykes at 12:02 AM

What a fabulous bittersweet send-off! And I love that the succeeding generations are continuing the traditions.