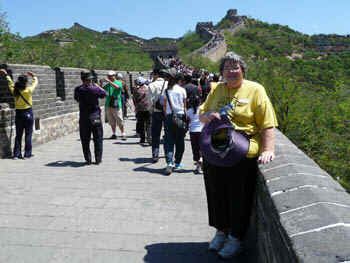 2. Did you keep your new year’s resolutions, and will you make more for next year?
I didn't make any last year and I haven't made any this year...it's easier not to break them that way!

3. Did anyone close to you give birth?
Of course. Our daughter-in-law presented the family with Lacie Ann in September. 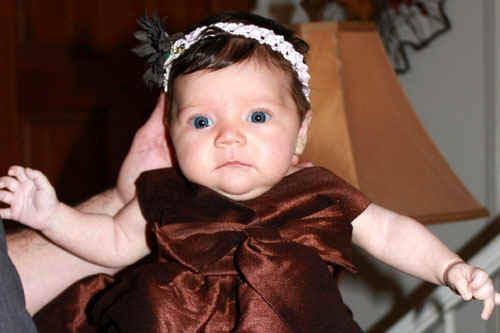 (She seemed a bit surprised about it all!)

4. Did anyone close to you die?
Sadly too many--9. The one that hurt the most was my cousin Kathy, even though we expected her death. Cousins Days won't be the same ever again. 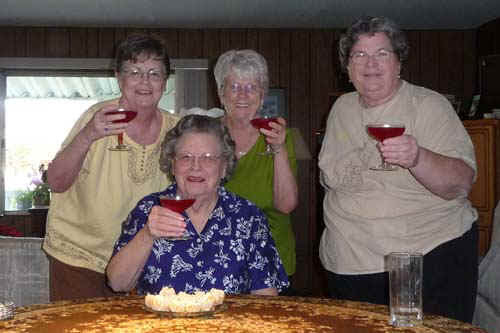 5. What countries did you visit?
China 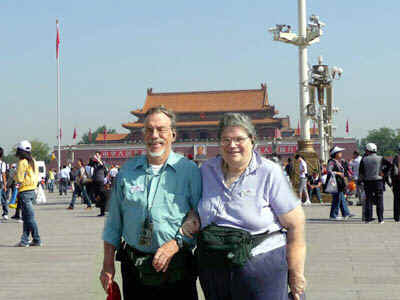 7. What dates from 2011 will remain etched upon your memory, and why?
September 20, the day Lacie was born.

8. What was your biggest achievement of the year?
I think it would have to be the deepening relationship with the Compassion kids.

9. What was your biggest failure?
Whatever it was I did that caused Peggy to end our 13 year friendship.

10. What was the best thing you bought?
Hopefully the new cell phones, which we bought three days ago. I expect to eventually fall in love with it. It is right up there with my Kindle, which I fought buying for years, but am so glad I finally lost the battle.

11. Whose behavior merited celebration?
Hands down, Walt and Ned, building the puppet stage for Bri.

12. Whose behavior made you appalled and disgusted?
Anybody involved with the sex scandal at Penn State; and the Catholic Church in Boston which would rather deny assistance to hundreds of orphans than to run the risk of anybody gay fostering or adopting one and giving the child a home.

13. What song will always remind you of 2011?
Well, it's not a new song, but "In the Arms of the Angel" has been so consistently on TV as advertisement for the SPCA. I notice it every time because it's what Marta and Paul's widow sang at his memorial service.

14. What do you wish you’d done more of?
I would like to have seen more movies in the theater

15. What do you wish you’d done less of?
Going to funerals.

17. What was your favorite new TV program?
A tossup between Grimm and Once Upon a Time. Try them if you haven't seen them!

18. What was the best book you read?
I don't think I have "a" favorite of the 41 that I read, but I discovered David Baldacci this year and his "Absolute Power," the first I read, was great. In non-fiction, I would have to name "The Mind's Eye" by Oliver Sacks.

19. What one thing would have made your year measurably more satisfying?
NOT losing my friendship with Peggy. 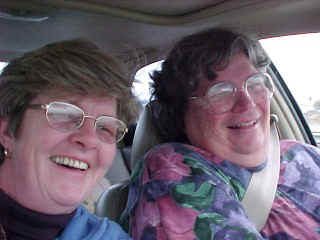 21. What kept you sane?
Blogging

22. Who did you miss?
The same people I always miss -- Paul and David

23. Who was the best new person you met?
Sharon Filmer, a woman from England whom we met on our trip to China. We became Facebook friends after the trip. 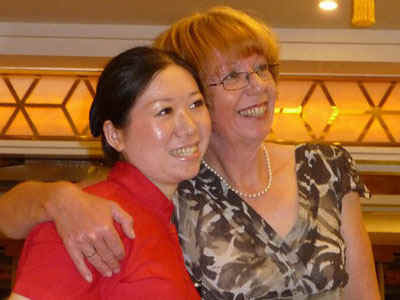 (with our waitress, Cherry)

24. Tell us a valuable lesson you learned in 2011?
Absolutely nothing lasts forever.

25. Quote a song lyric that sums up your year.
I've heard it said
That people come into our lives for a reason
Bringing something we must learn
And we are led
To those who help us most to grow
If we let them
And we help them in return
Well, I don't know if I believe that's true
But I know I'm who I am today
Because I knew you
(from "For Good" from "Wicked")