I had lunch with Peter Pan today.

Well, she used to be Peter Pan.

My former roommate, Jeannie, was going to be passing through Sacramento today and suggested that we meet for lunch. The last time we saw each other, I was pregnant with either Tom or Paul...or maybe David. Suffice to say it was a long time ago.

I found a picture of my first roommate, Judi, the one I didn't get along with. Perhaps the fact that she appears only by accident in the background of a group photo give some sort of indication of how I felt about her.

This was our little home on the hill on the campus of UC Berkeley. When looking for lodging before I moved to Berkeley, I secifically chose Mitchell Hall because it was the smallest dorm on campus and I was terrified at the idea of going into a big dorm my first time away from home. I think Mitchell had 50 girls compared to >100 in the other dorms in this 4-building complex and many more in the "new" dorms down on the flat. Also, living in Mitchell meant I got lots of exercise since I had to climb the long hill up Dwight Way every day.

At the end of my first disastrous semester as Judi's roommate, Jeannie took pity on me and invited me to be her roommate. I was delighted. 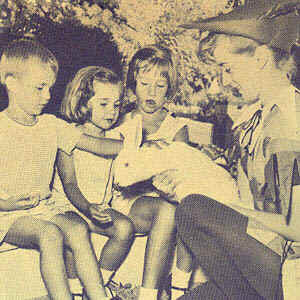 As I said, Jeannie had been Peter Pan. There was a park called Children's Fairyland in Oakland (it still exists) which was a favorite of little tots and hired older kids (maybe high school age?) to dress as various storybook characters.

I don't know how long Jeannie was Peter Pan, but what a perfect person to play the part. With the air of magic about her and how much she even looked like Mary Martin at the time, they must have hired her without much of an audition.

Her love of Mary Martin was one of the things that helped us be good roommates...she had a passion for Mary Martin that matched mine for Judy Garland, only I had met Judy Garland and she has received a personal letter from Mary Martin.

I have had great guilt for many years about our two semesters together as roommates. During the Judi semester, I had run away to Newman Hall and established a social life there so I didn't have to interact with Judi. Consequently I wasn't the close roommate that I'm sure Jeannie expected because of my social life at Newman, which kept me away from the dorm much of the time (though she did tell me today that I hadn't been such a bad roommate, so I finally feel better about that!)

We met for lunch at a Thai restaurant Marta had recommended and we sat and talked for 2½ hrs over some of the best pad thai I've ever had. We discovered that there was no awkwardness, despite the passage of >40 years. We slipped into chatter as if we had just seen each other yesterday.

We talked about our time at the dorm, and I was pleased when she rolled her eyes when I mentioned Judi. She also remember Char and I gave her the history of the Pinata Group. We discussed our grandchildren and books we had read.

We talked computers and cell phones. We talked music, and her feeling that her husband, who was a music teacher, would love to talk with Jeri, should the occasion arise. We also talked theater, since her husband has done lighting design and they have been active in theater (mostly in the musical part) for many years.

Jeannie has a masters degree in religious studies and she now teaches English to a group of Afghani women, which led to a discussion about the middle east. . She positively glows when she talks about her students and proudly showed off pictures of them. I swear, if more people would get to know people of other nationalities, colors, sexual orientation, religion, there would be less hate and more friendship in the world.

We compared notes on places where we had both been (especially the South of France, which we both loved).

The time just flew by and I was sad that we both had to leave. We parted in the parking lot with the hope that we will find an excuse to get together sooner than 40 years from now.

I was so pleased to discover the same person I remember from so long ago, just a little bit older, but still with that sparkle of pixie dust in her eyes and an enthusiasm for life that I remembered so fondly. She is Peter Pan, all grown up, but retaining the magic that made her special in the first place..
Posted by Bev Sykes at 12:02 AM

That is so great when two friends get together like that . so glad you had a good time .