So this is what I did today: 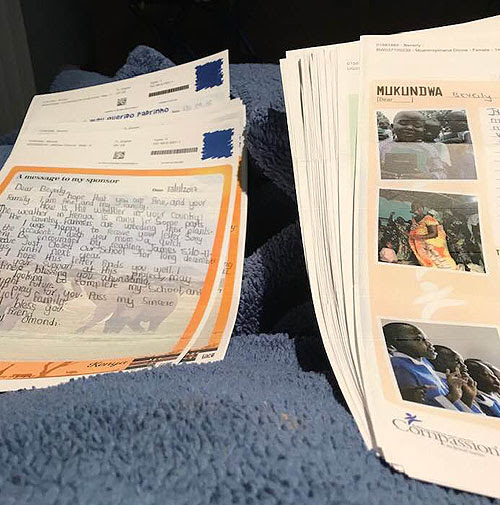 I answered lots and lots of letters.  The letters from my Compassion kids had been piling up and I had gotten behind on answering them.  It turned out that I had letters from 25 of them and then when I'd finished answering all of those, I wrote to the 4 that had NOT written to me, so all in all, I wrote 29 letters.

Compassion has evolved over the years I've been involved.  It used to be that you wrote to your child, sent it to Compassion headquarters in Colorado, it was forwarded to the country of that child, where it was translated and then delivered to the child.  When the child responded, it was the same process, but in reverse.

This meant that it could take a good six months for your letter to get to your child and his/her response letter to get to you.  And as many of the children's letters are so similar, it was often a great disappointment when the letter finally arrived because 9 times out of 10 it was pretty close to the last letter(s) that you received.

Once in awhile you'd come across a real good letter writer and then you could actually get a conversation started where you'd write something and the child would respond to what you wrote.  Those letters were golden, but it still took months for the exchange to take place.  That may be one reason why I ended up with so many correspondent kids.  If you have 30 kids to write to, instead of just one or two you're bound to get more letters.  So I sponsored lots and agreed to correspond with lots of kids whose sponsors, for one reason or another, were not interested in corresponding with their sponsored child.
For me, the chance to have conversations, however stilted, with these children in so many other countries (12 now) is the perk of sponsorship.  But I know that's not everybody's bag.  My biggest influx of correspondents came about two years ago, when a corporation decided to sponsor 1000 children in Kenya, but obviously were not going to write to them.  A whole bunch of us picked up new kids to write to at that time.  I took on eight of them, along with the 3 I was already sponsoring in Kenya.

But all this time, Compassion has been working to improve the speed between letter exchanges, and the internet age has been a great boon in that.  Now you can write a letter on line.  They have a bunch of different stationery designs to choose from, both decorative and seasonal.  At first you could add a couple of photos on the bottom of the letter, but now you can include two pages of scanned photos, which is lovely especially at Christmas time.  I think I sent 10 photos today.

What has sped up the process is not only on-line letter writing but the facts that now you do not receive the child's actual letter, but a high quality scanned copy.  Some folks don't like not being able to touch the actual paper their child touched, but that doesn't matter to me.  Now instead of an exchange of letters taking six months, sometimes I get my child's letter a month--or sometime just a couple of weeks-- after it was written.  The new system allows for a much closer relationship to develop with those children who enjoy writing (the others still send the same canned phrases)
Of course, with the speed between letters having shortened considerably, this means that letters pile up a lot faster.  It is not unusual to receive 3-5 letters a few times a week.  If I don't sit down and answer them right away, they can easily get buried.

I used to be very faithful, writing to the kids every 1-2 weeks, but now I hear from them so often I don't have to follow that schedule any more.  I also found that they only get letters delivered once a month, so writing once a month is sufficient.

I used to send little gifts by snail mail but I've stopped doing that.  Now the gifts I send by snail mail are to Brianna and Lacie.

I've discovered I'm not the only one in the family who writes to the girls.  Jeri and Ned both write, and once in a great while Walt will write if one of them has written to hi first.  I love t hat we are establishing a habit of writing letters.  The girls actually gave Walt a box of note cards for Christmas so he can write to them

The one thing I did NOT do today was to write to a friend to whom I have owed a letter for several months.  Actually, I can't remember which of us owes a letter but I need to write to her.  And I was thrilled today to receive a short email from a friend I thought had melted into the woodwork, but says she will write soon.  That promise made me happy.  I don't know her well, but I always enjoy hearing from her.