It's over and I am cancer free!

And while I didn't get ice cream, I did get a vanilla malt.

Ned and I got to Kaiser around 9 and I was handed a sheet of paper telling me what to expect over the day--and that they hoped I had no other plans, because this could take awhile. 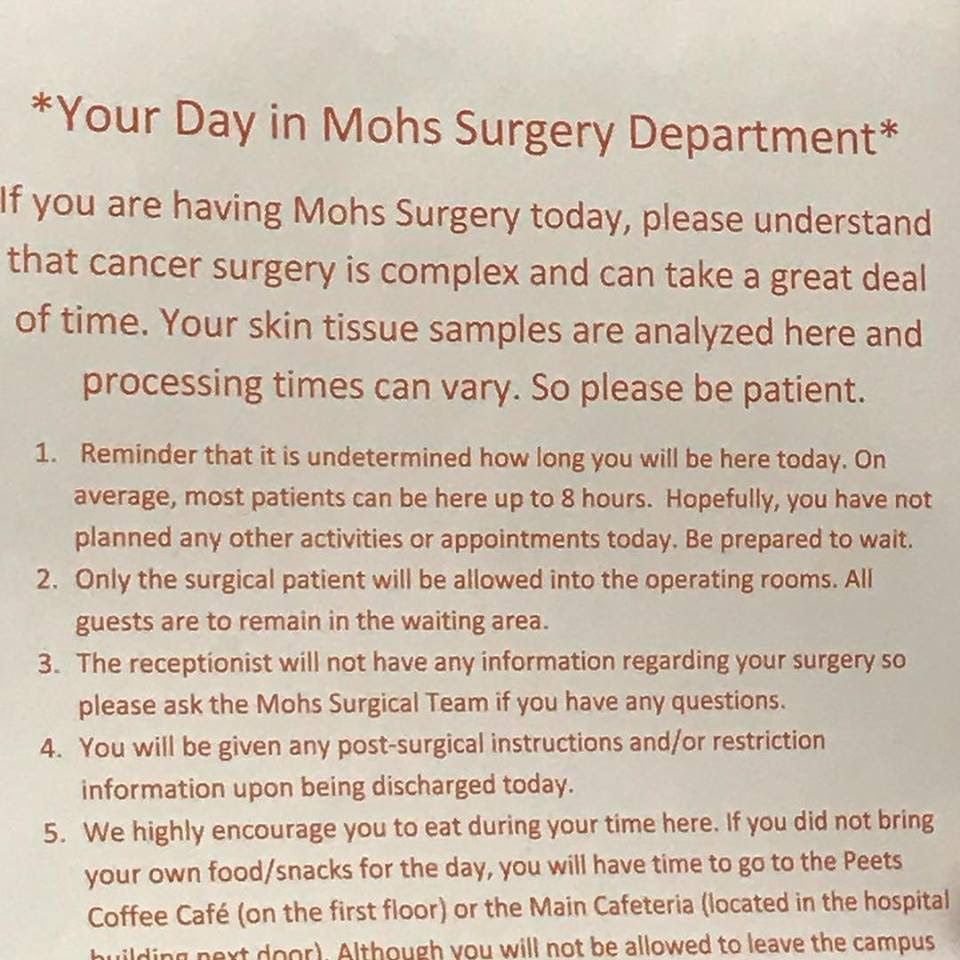 We hardly had time to set up our electronic devices when they called me. 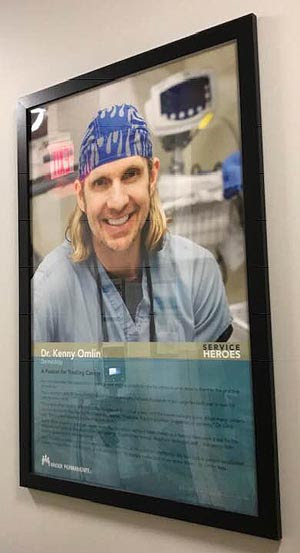 The first thing I saw on entering the surgery area was this giant poster of my doctor, who I see here is a "service hero."

He said he's embarrassed about it but he won an award a couple of years ago and it came with posting this huge poster on the wall.

The nurse got me set up in the procedure room.  I groaned when I saw that I was going to have to be lying flat  for t he procedure, especially after she told me it would take about 30-40 minutes.

But when the doctor came in to adjust things he decided it might be better if patients were at an angle, and he positioned the table on which I was lying to almost exactly the position that I have my recliner when I sleep at night.  I was comfortable throughout the whole thing.

Modern medicine is certainly wonderful. I sort of felt the needle with the Novocain going into my face, but literally for only seconds and then I felt nothing but the doctor poking and prodding to make sure that the medication was evenly distributed.

As for the procedure, I was blissfully unaware of what was going on, other than a lot of pushing and in the end cauterizing (I could smell that).  But soon I was bandaged up and sent out to the waiting room to wait for the results from the lab.

Of course I took a selfie! 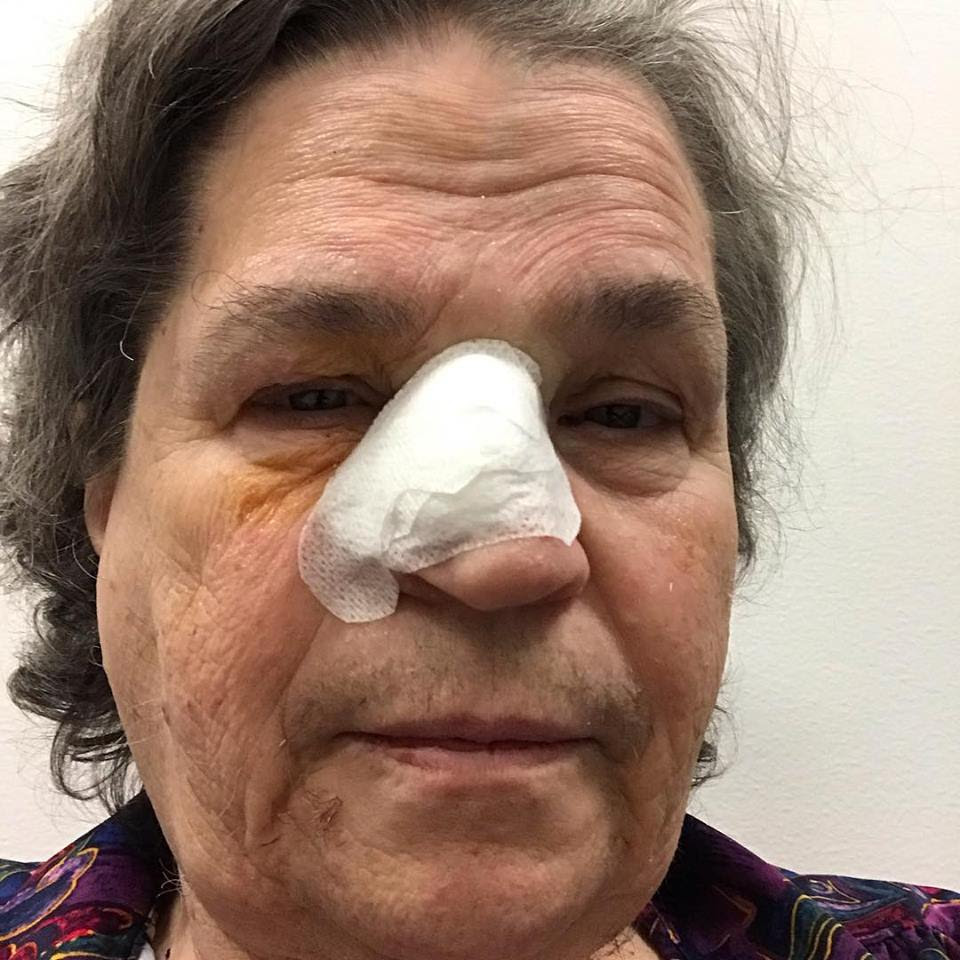 Of course I sent it around to everyone, including Facebook and Instagram.  I had no sooner gotten my audio book set up when the doctor came out and told me that the edges were clear and that as soon as he stitched up the wound, I could go home.  Yay!  No 9 hours of waiting for me!
The stitch up took 30 minutes and I actually dozed off while he was working, having some bizarre dreams.

When I posted my "after" picture, my friend Kari posted HER similar photo. 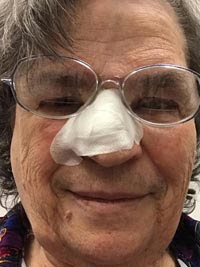 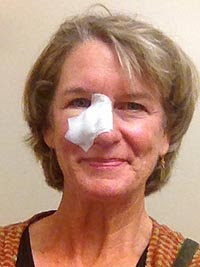 (I wrote to ask if she had the same doctor!)

I am mostly thrilled that I can wear glasses, though as you can see they are a bit askew,  which kind of affects my balance a bit.

Ned decided we should go to Fenton's for lunch so I was able to have that yummy crab salad sandwich, and probably scare lots of the kids eating around me. 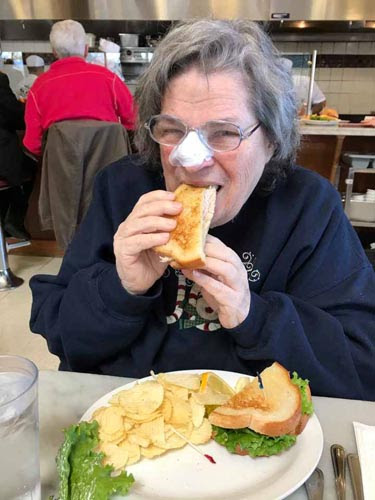 We stopped at Costco on the way home, and I was plum tuckered by the time we left there, so I kind of dozed on the way home and then fell asleep while Ned and Walt were discussing Depends.

Now that the Novocain has worn off, I am starting to get a bit of pain that radiates from the incision all the way to the back of my head, but it's not bad and Advil helps.  I'm just so glad it's OVER and that it all went well.
Posted by Bev Sykes at 5:36 PM

Email ThisBlogThis!Share to TwitterShare to FacebookShare to Pinterest
Labels: my surgery