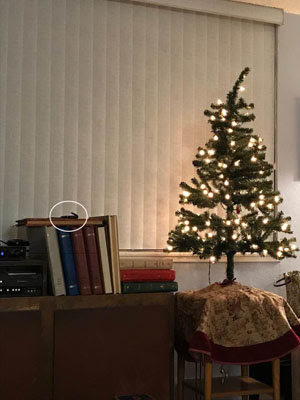 It's not Christmas until Bing Crosby sings "Jingle Bells."

The Christmas album has been played in my house ever sine I was a kid when it was vinyl and was played while we were decorating the tree.  When we had our own house and our own kids and our own tree, we played Christmas music, but it always started with Bing Crosby's mix of religious and non-religious along with drinking a glass of egg nog.  It was Tradition.

This year the tiny tree is going up long before it has in years past because Jeri is here and we could have our traditional tree trimming.  We didn't have egg nog, but Jeri and I both had the Crosby album on our various electronic devices.  The problem was that there was no way to PLAY it.  The speaker I have that fits my iPod is missing somewhere in all this mess and so there were no speakers.  Jeri finally put her iPod near the tree (see circled) and turned the volume up full blast.  It was barely audible, but Bing was there and tree trimming could commence.

I went a year or two with no tree when we had no kids to be around and there didn't seem to be any point, but with the grandkids coming around the time of the holiday last year, I decided to get a small-ish artificial tree at Michael's.  75 years old and it was the very first non-green real tree I'd had. 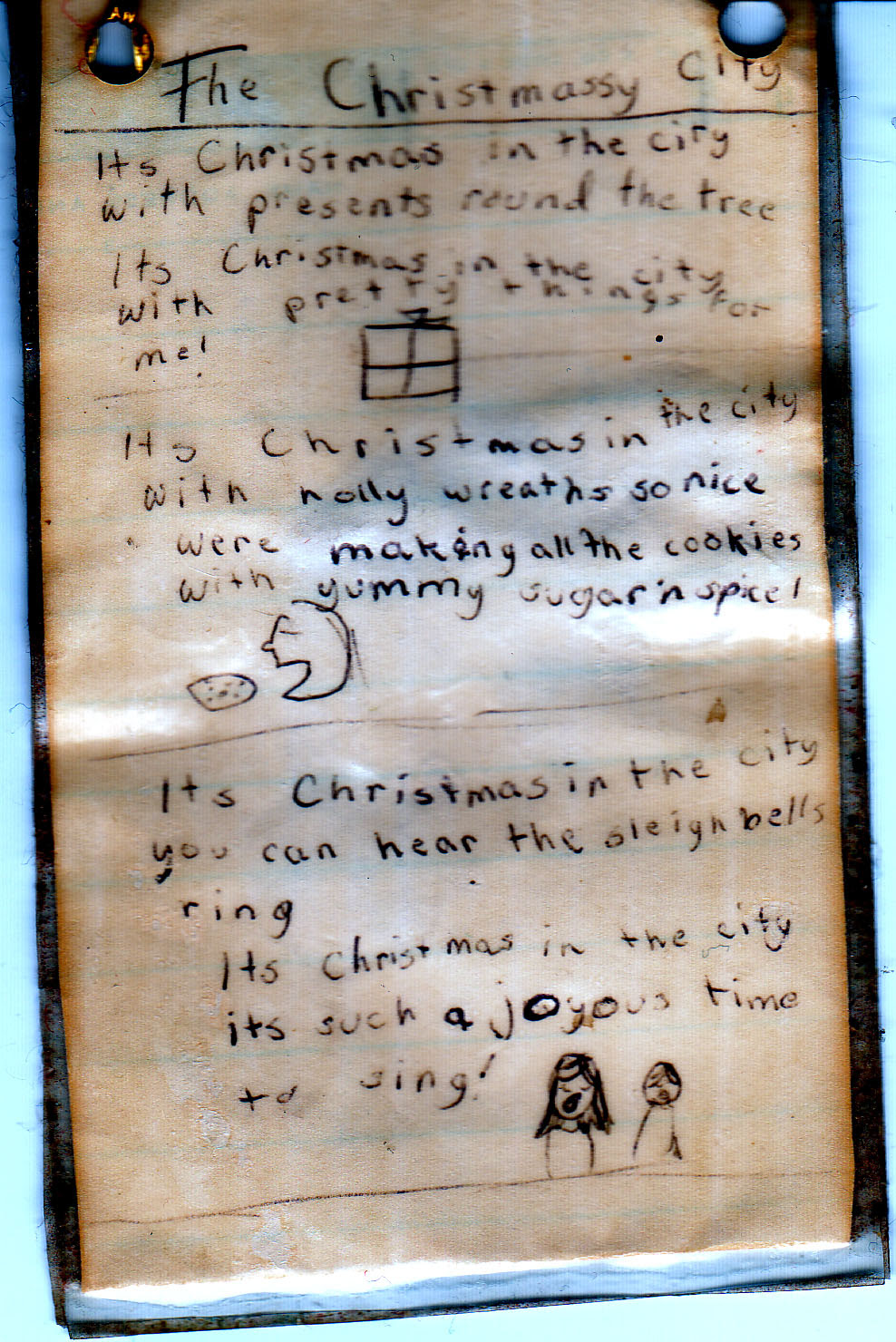 It was also much smaller than any tree we had decorated, but it worked an I whittled down our large box of ornaments to one shoebox size box with just the "special" ornaments in it, like the Necropsy ornaments -- collars from two dead dogs, one of the tennis balls Seymour liked to chase, a black leather jacket with "bitch" written in pink on the back for David (I wanted just a plain black leather jacket ornament, sure I could find one in the Castro District in San Francisco, but this was the best we could do), and then the "necklace" of smiley faces Paul gave me as a joke once, arranged like a silver string across the top of the tree
I also kept this Christmas poem Jeri wrote many years ago.  That year all the kids made "ornaments" like this which I encased in plastic but this one seems to be the only one that has survived.  I was always sad to lose Ned's "Jesus doing a front dive" ornament (those were the diving years!) 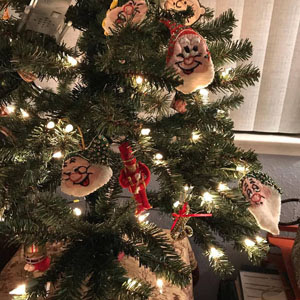 There are the 7 dwarfs, which my friend Kathy made for me decades ago.  I think I only have 6 now, but they definitely have to be in the "special" box.

There are also ornaments of each of the kids' faces.  Only Tom's made it to the tree this year because his picture shows his face covered with freckles and I thought freckled Brianna might like to see it.

And there are several ornaments which represent musical instruments, given to one or the other kid over the years.

Of course there is also a 49er ornament for Tom.

Once we got the tree trimmed, Santa made a quick stop and left a couple of packages for Jeri, including a sweater with a bike riding Santa Claus. 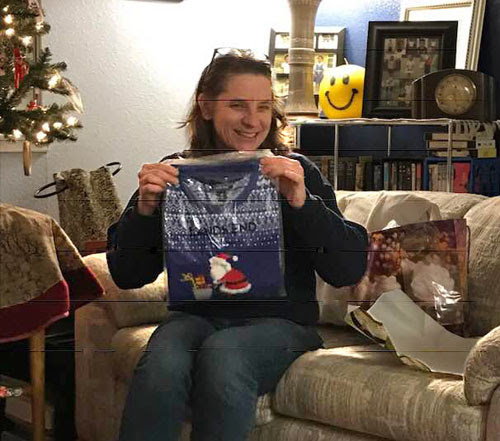 It's  gift I would not have purchased if she were going to be here for Christmas because by the time you open your Christmas sweater, it's no longer Christmas.  But since this is only the start of December, I thought she might enjoy wearing it as she bikes around Boston.

We watched the "15th Anniversary of Wicked" program I recorded in October and then kept to show to Jeri and then she and Walt conked out by 10 p.m., and I was left with at least two hours to kill before I could think about going to sleep.
Posted by Bev Sykes at 4:40 PM

Email ThisBlogThis!Share to TwitterShare to FacebookShare to Pinterest
Labels: Christmas with Jeri