The day after Gilbert died, in 1986, I was driving his family around San Francisco to make funeral arrangements and do some sightseeing.  San Francisco is a notoriously terrible place in which to find parking.  Over the years of our friendship, whenever Gilbert and I went somewhere, I was in charge of looking for parking for us.  So as I got into his car to start the drive on that awful day, I said "OK, Gilbert, I've been finding you parking for years.  Now it's your turn."

Amazingly on that day I found parking everywhere, especially in the middle of Chinatown and in front of Ghirardelli Square, two paces where you can NEVER find parking.

At first it became a joke but as people discovered that no matter where I went there was available parking they began to believe me.  For the first several years after Gilbert's death, a bunch of us met on the anniversary of his death to have dinner  together in one of his favorite restaurants.  Invariably, there would be a parking place directly in front of the front door when I arrived.  Over the past 30 years it has just been generally accepted that Gilbert has become my parking angel.

I figured this was Gilbert's version of hell--spending the rest of my life finding me parking.  The last Lamplighters funeral we attended was held in a beautiful church in a very, very busy part of town, but even though we were not early, we had a place to park directly across the street from the door.

After David and Paul died, I started talking to them too about parking, especially when going to Atria.  I figured it was their grandmother and they should not expect Gilbert to do all the work.
This morning was a brunch for the memory unit people and their loved ones.  I figured it would be difficult to park, so I reached out to all three of my parking angels and when I got to the Atria parking lot there were three vacant slots lined up next to each other.

I told them that the blatant sarcasm was not lost on me!!! 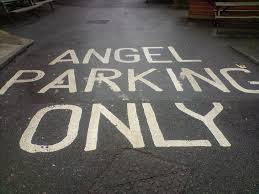 It was a difficult morning.  Walt has been having problems with incontinence, so has been sleeping downstairs, where it is easier to get to the bathroom.  As I opened my eye this morning, he called out, "I'm sleeping in a pool of my own blood."

And a good morning to YOU too!

However, he was right and the amount of blood was a bit alarming.  Ned was coming over to have brunch with us at Atria and he called his friend Jessica, who works with old folks like Walt and me, to come and do an assessment while waiting for him to arrive.  She did not feel there was cause for alarm, which was reassuring.

When Ned got here we called Kaiser and the decision was made to have him come to Urology to be checked out, both for the bleeding and for the incontinence.

But what to do about Grandma?  Though she doesn't know Christmas from last Tuesday or next Monday, I still felt bad blowing her off, so we decided Ned would go to Kaiser and I would go to Atria, which meant maneuvering my walker into the car...and finding a place to park.  I loved my Christmas present from my three parking angels.

Brunch, it turned out, was in the Memory unit dining room and she was not there when I arrived.  One of the aides told me she was in her room.

I went to her room and not only was she still in bed, but she was so soundly asleep she was snoring.  Knowing what an ordeal it would be to wake her up, get her dressed and get to the dining room--and how crabby she would be for being awakened out of a deep sleep, I just left the box of See's candy I had for her and left.  I'll be back next week.  It won't make a difference to her anyway.

When I got home Ned and Walt were gone and I took advantage of the alone time to watch last night's Outlander.  Walt had been sufficiently upset about his incontinence (before the blood) that he was in and out of the room every few minutes while I was trying to watch it.  Nothing like trying to watch a graphic love scene while someone is asking you about Depends.

The show was just ending when Ned and Walt returned.  Walt was much mollified to learn that nothing was unusual and that his body was doing just what it is supposed to do...and probably will be doing for perhaps as long as a year.

It appears he will be sleeping in his recliner for possibly a long time to come, so Ned is helping me choose wireless ear phones so I can listen to the TV at a volume that is OK for me and doesn't drive Walt nuts.

I can hardly wait to see what personal aberrations will be caused by MY surgery on Friday!
Posted by Bev Sykes at 5:25 PM

Email ThisBlogThis!Share to TwitterShare to FacebookShare to Pinterest
Labels: parking, trying to see my mother for Christmas