I know I've done a lot of memes lately, and really--I wasn't going to do another one right away, but I stumbled across this one and it had my name all over it! The person who posted it answered it for the old days of TV. I'm doing it for both then and now.

1. Name a TV show series in which you've seen every episode at least twice:
How much time do you have? Just to name a few: The Dick Van Dyke Show, Northern Exposure, Golden Girls, Monk, The West Wing, Little House on the Prairie, The Brady Bunch (what can I say? I had kids!), Star Trek, the Original Series, and more recently, thanks to marathons: Criminal Minds, NCIS, and probably Law and Order and Law and Order SVU. Yes, I really have seen all of these series at least twice, some of them too many times to count.

2. Name a show you couldn't miss:
In the earlier years of TV, Laugh-In. Today, The Daily Show, NCIS, Criminal Minds, and White Collar.

3. Name an actor that would make you more inclined to watch a show:
Most of the people who would be "definitely inclined to watch" are now either dead or too old and not performing any more! But some names of those still performing would be Betty White, Mark Harmon, Michael J. Fox.

4. Name an actor who would make you less likely to watch a show:
Tom Arnold, Charlie Sheen

6. Name a show you like that no one else that you know enjoys:
I keep trying to get people to watch White Collar, which may be my current favorite show, though I think it would be difficult to come in now because it's a continuing story and I don't know how important it is to know the back story. I have not found ANYBODY who likes the show--so if you do, let me know!!!

7. Name a TV show which you’ve been known to sing the theme song:
Gilligan's Island, The Brady Bunch, All in the Family and probably others, though most of the shows that I know have instrumental music, not songs.

8. Name a show you would recommend everyone to watch:
See #6. Also, of the new shows, Once Upon a Time and Grimm. Both are unique and done very well. There was also a GREAT Canadian TV show that I got thru Netflix called Slings and Arrows about a community Shakespearean company that was fabulous.

9. Name a TV series you own:
West Wing, Northern Exposure, Picket Fences, The Dick Van Dyke Show, Slings and Arrows. I also bought Sex and the City, but discovered I didn't really like it and sent it to Amanda, in Afghanistan. She was thrilled.

10. Name an actor who launched his/her entertainment career in another medium, but has surprised you with his/her acting choices in television:
Hugh Laurie, Kristin Chenoweth, Fred Thomson

11. What is your favorite episode of one your favorite series?
Char will not be surprised to hear that it is the boat episode of The Dick Van Dyke Show, "The Curious Thing about Women." Still the funniest sit-com episode ever. 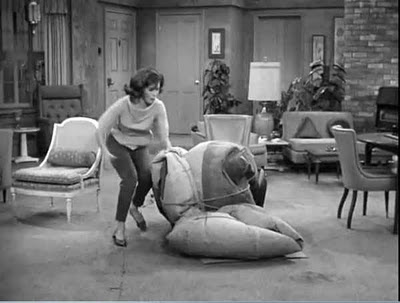 12. Name a show you keep meaning to watch, but you just haven’t gotten around to yet
Breaking Bad. I have had people tell me it's excellent, but I've never seen it.

13. Ever quit watching a show because it was so bad?
Brothers and Sisters. I used to like it but it became absolutely horrible. I watched the first season of Hawthorne because I like medical shows,but the medicine practiced on that show was so ABOMINABLE that I stopped watching it. I still watch Desperate Housewives and ask myself every week why. I guess because this is the last season and I have several years invested in it!

14. Name a show that’s made you cry multiple times:
Touched by an Angel every time. And Lassie...oh god definitely Lassie! But I cry at Hallmark commercials, so I think it's fair to say that almost ANY show I watch, comedy, drama, crime drama, etc. has made me cry at one time or another. Even The Daily Show once or twice.

15. What do you eat when you watch TV?
I have never been a TV eater. It's the only time I actually don't eat!

16. How often do you watch TV?
The TV is always on here. I actively watch it some of the time, and also it becomes white noise to work to, and something to put me to sleep at night.

17. What’s the last TV show you watched?
As I write this, Countdown is on and Rachel Maddow is about to begin.

18. What’s your favorite/preferred genre of TV?
Medical dramas (but only if they are realistic) and crime dramas. I've been watching Medical dramas since Ben Casey in the early 1960s, when I was still living with my parents.

19. What was the first TV show you were obsessed with?
The Loretta Young Show. I had a huge crush on her and we waited eagerly to see what outfit she would be wearing when she swept through that door at the start of each show.

20. What TV show do you wish you never watched?
The L Word. After 4 seasons, the ending was so abominable that I was angry I had wasted so much time watching it.

22. What was the single most memorable progam you ever saw on TV?
Toss-up between the JFK Funeral andThe Six Wives of Henry VIII (1970)

23. What TV show scared you the most?
Any of the documentaries about how we are destroying our world--like a recent documentary I saw about the world toilet crisis. Sounds funny, but man, that's enough to give you nightmares!

24. What is the funniest TV show you have ever watched?
Consistently, The Dick Van Dyke Show. Runner up: Laugh In.

25. What show was canceled too early into its run?
I don't remember the name of the show, but it was about a couple of kids who were being targeted for murder for reasons they didn't know--and it turned out that the guy who wanted them dead was the kid's father. But we never got a chance to find out why. A writer's strike stopped it mid-season, and it never started again.
Posted by Bev Sykes at 12:02 AM

We love White Collar. I was surprised to see the lead (can't think of his name) singing & presenting at last year's Tony Awards show.

The West Wing was one of my all-time favorites. The Xmas program in the first season (Toby's coat) makes me cry as soon as it starts. NCIS with Charles Durning makes me cry. I won't watch (again)the NCIS where Mark Harmon gets killed.

The answer to question 25 is Traveler it was on abc . I watched it too and it ticked me off when it got canceled .

Of course I had to swipe this!