Since Holidailies was so unsatisfying last year, I decided to join Amber & Neely's blog challenge this year. They will post a topic a day to talk about for the next two weeks. Since I've seen all the topics to be covered and realize that many won't require a response that will fill a normal-length (for me) blog entry, the challenge may only take up the first half of the entry. But here goes for topic #1 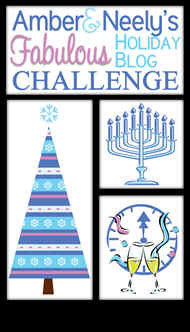 What was your favorite gift EVER?

Looking back over 68 Christmases, it's difficult to pick just one. Whenever I think about gifts that made the biggest impact when I was growing up, I always come back to one...it was a faux fur jacket that my parents gave me. Kind of a bolero style. I was probably 13 or 14. My mother had been positively giddy about her purchase and dropping hints all over the place. Then, just before Christmas, I was babysitting and watching some program on TV and the young girl in the show received the exact same jacket as a gift and I knew instantly that was what my mother had bought for me, though I didn't tell her that.

The other most memorable gift was my first camera, a Brownie Hawkeye that I got when I was 10. I remember wen it was delivered to the house from the department store where my mother bought it. When the package arrived she said she knew what it was and was not going to open it. I bugged her and bugged her about it and got her to admit that there were "10 gifts inside." She was counting all the different parts of the camera to try to confuse me. That was the start of it all, though. I have been an inveterate photographer ever since that first camera.

I've had wonderful gifts as an adult too. Jeri was always good at making special gifts. I remember the year that she decorated 12 eggshells as Gilbert & Sullivan characters. We were so touched and amazed that she had done that. I think over the years they may have all broken, or there maybe a couple which survive (that box hasn't been unpacked to put back in the living room yet, so I can't go check).

The gift she gave me that touched me the most, though, was the year after our dog Seymour ate the face off of "Delicate Pooh," that Pooh bear which had become our Velveteen Rabbit, loved by all of our kids (especially Tom). For Christmas that year, Jeri rebuilt Pooh's face. Mostly what it did was to keep the stuffing from falling out of the stuffed animal, but I was so touched that she had done that, that it moved me to tears. 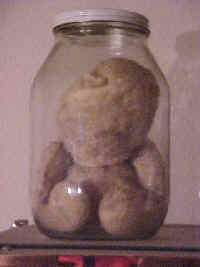 (These days Pooh lives in a mayonnaise jar...I'm sure Stephen King could make a good story out of that!)

I mostly love gifts that people have put some thought into and have done something or purchased something that they knew I wanted, but which surprised me. Ned and Marta one year made a donation to a charity--bought musical instruments for a school somewhere. I was so incredibly proud of them that year. And when Tom knew I would be flying to France, he bought a battery charger for my iTouch so I could use it all the way without worrying about the battery dying. And then there was the year Walt surprised me with the iPod...I wasn't sure he even knew what an iPod was...and I have had so much use out of that little gadget.
Posted by Bev Sykes at 12:02 AM

I just love it when folks think out gifts . I cant remember a good christmas that was not ruined really and so christmas does not hold good memories for me . tried to get the hubby to get a christmas tree and no there is no going there with him . No tree again this yr . Maybe one year he will let me put one up .