Until this week, the thing that Davis was best known for was the snoring girl and the multi-thousand dollar toad tunnel. We made one of those weird news newspapers. Haha. Quaint little Davis.

Well, we're back in the news again, but now we are making front page news all across the country, and on television too. Probably internationally as well (though I personally have not seen any international coverage). This is an image we don't want any more than we wanted the world to know that you could get a ticket for snoring in your own bed in this town.. 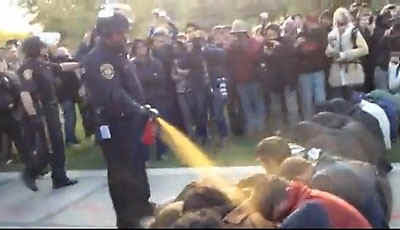 Angus Johnson, an historian of American student organizing has written a wonderful account of what really happened on campus:

1. The protest at which UC Davis police officers used pepper spray and batons against unresisting demonstrators was an entirely nonviolent one.

None of the arrests at UC Davis in the current wave of activism have been for violent offenses. Indeed, as the New York Times reported this morning, the university’s administration has “reported no instances of violence by any protesters.” Not one.

2. The unauthorized tent encampment was dismantled before the pepper spraying began.

Students had set up tents on campus on Thursday, and the administration had allowed them to stay up overnight. When campus police ordered students to take the tents down on Friday afternoon, however, most complied. The remainder of the tents were quickly removed by police without incident before the pepper spray incident.

3. Students did not restrict the movement of police at any time during the demonstration.

After police made a handful of arrests in the course of taking down the students’ tents, some of the remaining demonstrators formed a wide seated circle around the officers and arrestees.

UC Davis police chief Annette Spicuzza has claimed that officers were unable to leave that circle: “There was no way out,” she told the Sacramento Bee. “They were cutting the officers off from their support. It’s a very volatile situation.” But multiple videos clearly show that the seated students made no effort to impede the officers’ movement. Indeed, Lt. Pike, who initiated the pepper spraying of the group, was inside the circle moments earlier. To position himself to spray, he simply stepped over the line.

4. Lt. Pike was not in fear for his safety when he sprayed the students.

Chief Spicuzza told reporters on Thursday that her officers had been concerned for their safety when they began spraying. But again, multiple videos show this claim to be groundless.

The most widely distributed video of the incident (viewed, as I write this, by nearly 700,000 people on YouTube) begins just moments before Lt. Pike began spraying, but another video, which starts a few minutes earlier, shows Pike chatting amiably with one activist, even patting him casually on the back.

The pat on the back occurs just two minutes and nineteen seconds before Pike pepper sprayed the student he had just been chatting with and all of his friends.

5. University of California Police are not authorized to use pepper spray except in circumstances in which it is necessary to prevent physical injury to themselves or others.

From the University of California’s Universitywide Police Policies and Administrative Procedures: “Chemical agents are weapons used to minimize the potential for injury to officers, offenders, or other persons. They should only be used in situations where such force reasonably appears justified and necessary.”

6. UC police are not authorized to use physical force except to control violent offenders or keep suspects from escaping.

Another quote from the UC’s policing policy: “Arrestees and suspects shall be treated in a humane manner … they shall not be subject to physical force except as required to subdue violence or ensure detention. No officer shall strike an arrestee or suspect except in self-defense, to prevent an escape, or to prevent injury to another person.”

7. The UC Davis Police made no effort to remove the student demonstrators from the walkway peacefully before using pepper spray against them.

One video of the pepper-spray incident shows a group of officers moving in to remove the students from the walkway. Just as one of them reaches down to pick up a female student who was leaning against a friend, however, Lt. Pike waves the group back, clearing a space for him to use pepper spray without risk of accidentally spraying his colleagues.

8. Use of pepper spray and other physical force continued after the students’ minimal obstruction of the area around the police ended.

The line of seated students had begun to break up no more than eight seconds after Lt. Pike began spraying. The spraying continued, however, and officers soon began using batons and other physical force against the now-incapacitated group.

9. Even after police began using unprovoked and unlawful violence against the students, they remained peaceful.

Multiple videos show the aftermath of the initial pepper spraying and the physical violence that followed. In none of them do any of the assaulted students or any of the onlookers strike any of the officers who are attacking them and their friends.

10. The students’ commitment to nonviolence extended to their use of language.

At one point on Thursday afternoon, before the police attack on the demonstration, a few activists started a chant of “From Davis to Greece, fuck the police.” They were quickly hushed by fellow demonstrators who urged them to “keep it nonviolent! Keep it peaceful!”

Their chant was replaced by one of “you use weapons, we use our voice.”

Six and a half minutes later, the entire group was pepper sprayed.

I am shocked, sick and disgusted that this should happen on the UC Davis campus, in our own back yard. Even more sick and disgusted the Newt Gingrich this morning says that all of the Occupy demonstrators should "take a bath and get a job." He's missed the point that a huge part of the problem is that many of them can't find a job, and that more and more businesses are laying off thousands of workers as they are forced to downsize.

How about get out among the demonstrators, Newt, and hear their stories? Then see if you're still so glib about showers and jobs. 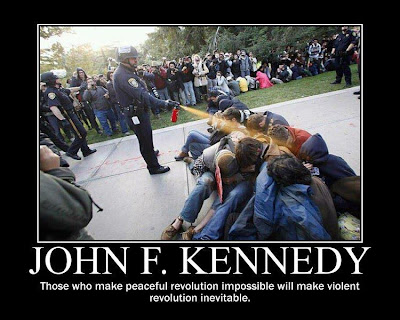 This reminds me of the time I took my kids to a parade and some of the people started getting rowdy and this stupid police woman sprayed pepper spray in the direction of those ppl and it was windy and it hit my son and me and we had to walk over to the hospital with my youngest son leading us because I and my oldest could not see . I talked to the police cheif about how he needed to better train this woman . He agreed needless to say my bill was paid by the police dept .

Crazy..I'm speechless.
It sure sounds like abuse of power.