As I have mentioned here probably more times than you want to read, the death of my friend Gilbert in 1986 was my first experience with loss. I had, of course, been to many funerals. I had even experienced the death of my sister, which should have been a big trauma, though since we had never been close, that loss was not as acute for me as others assumed it was. But Gilbert's death was the pivotal moment. The moment when I really began to experience grief, to know the meaning of "grief work."

The pain of Gilbert's death was compounded by the fact that my other good friend, Phil, who had been my close confidante for years (all fat girls should have gay confidantes!), chose that moment to end our friendship. It was a double whamy. The painful death and the slamming of a door which could not be re-opened. It was a terrible time.

I had also just started a new job at that time and didn't really know my co-workers all that well, but one woman, Debra Lilly, observing my depressed demeanor in the first days of my return to work went out at lunchtime and when she came back, she handed me a book. It was a thin little book called "How to Survive the Loss of a Love." I have been grateful to her ever since, though we lost contact years ago (only recently reconnected on Facebook).

That book was my guide for months as I worked through losing both Gilbert and Phil. I read the book every day, and my gauge through my grief over Gilbert's death was how far I could get through the book before I started to cry. I never fully recovered from losing Phil, mostly because while the possibility was always there because he was still alive, there was never any closure. But in time I came to accept that there was nothing I could do about it. He's long dead now, and it still hurts.

I never joined any support group because I didn't know of one where you could bond with people who had lost friends, but I toughed it out on my own. Walt was here, of course, and sympathetic. He was sad about Gilbert's death too, but didn't feel it on the gut level that I did.

A friend lost her mother earlier this year. She's a "tough it out on my own" person as well, but she eventually joined a support group and was surprised at how much help she received from sharing her feelings with others in that group. Today there was a Service of Remembrance for all the members of all their grief groups and she invited me to come with her, which I decided to do.

It really was very nice. 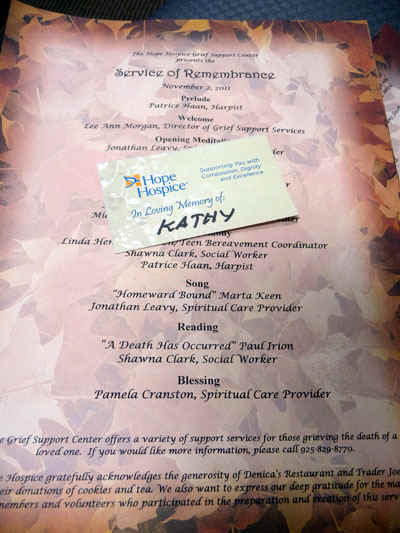 The service was short, but meaningful. I liked the lighting of five candles (only four of which I remember): one for grief, that we grieve the loss of the person we loved, one for courage to move forward in life without the one we loved, one for memories of all the fun we had together and all the good things we shared, and one for hope as we move forward into life without the person we loved. It was very moving.

There was a ceremony where we all were given roses onto which we put the name of the person who died and put them each in a vase on a big table in front. 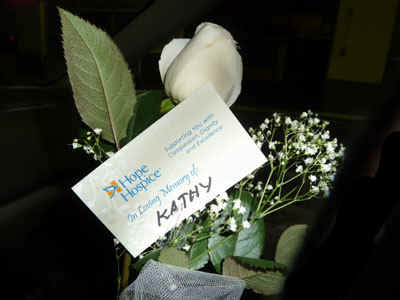 And then a guy sang a song which was designed to elicit the most emotion of the night. It looked like a mosh pit of some famous performer, with all those tissues waving in the air from all the boxes places all over the room, and all the nose-blowing as the singer sang.

When it was all over, there were refreshments and I met the others in my friend's support group--very nice people all, and all having lost parents. I overheard someone use a funny term something like "It's been two years and I still have 'grief brain.'"

I'm glad I went. I don't know that I really needed to be there, but joining with other people who have suffered great loss and feeling the supportive energy is always helpful for any painful loss. I hope.
Posted by Bev Sykes at 12:18 AM

Yes it is good to join with people who have also lost loved ones and the support that the group offers is so valuable .