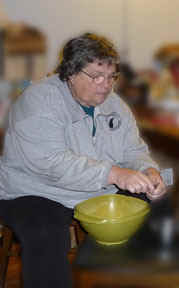 I've had the most relaxing Thanksgiving ever. I sat home and watched a series of family movies (including Music Man and Anything Goes), at some point I trimmed and cut the green beans for tomorrow's dinner (to be cooked with bacon, not the mushroom soup and canned onions that is so popular), and I made a couple of pumpkin pies.

I felt like my mother. How often have I watched my mother sit with two bowls, peeling and slicing apples for apple pie or stringing string beans for dinner. Frozen foods have about eliminated the need for that, but I just felt I wanted to do it this time.

I checked on the frozen turkey out in the fridge in the garage and it has thawed nicely...it may be a bit frozen in the center, but by the time we take it to my mother's tomorrow morning, it will be perfect.

All day long I've felt very relaxed and not at all worried about deadlines or anything. Funny how tomorrow will be exactly as if it were Thanksgiving Day, but I don't have that pre-holiday knot in my stomach that I always get on "the" day of an event, even when the "guests" only include the people that I see all the time and when I know that I don't have to "perform."

I've always been a person for whom "being on time" looms very large. I attribute it to being the daughter of a man who worked on a train. You don't fudge with arrival and departure times when you know that the train is going to take off whether you are on it or not.

In truth, I don't know for certain that this is why I've always been such a stickler for being on time always, but it seems like a logical excuse.

I always plan for lots of waiting times in airports. I set my mind not to be bothered by having to sit in an airport for long times. I bring books with me and look at it as an opportunity to read and to watch the passing crowd. I am, of course, never in danger of missing my flight. I have a meal in the airport, and bury myself in a book. If I am really early (or if the flight is postponed or canceled), I find a nice wifi hot spot and use my computer. Lots of options!

The first time was when I was still working for the Physics Department. My boss, a professor, invited me to a Christmas party he was throwing. It was my first "grown up" party and I was determined to be on time. We had been invited for 8 p.m. and by god we were going to be there at 8 p.m. In fact, we were five minutes early. That was when I learned about being "fashionably late" for parties. We were the first to arrive, the wife was still getting dressed, and they were clearly uncomfortable with our being so "early." (I don't know if it's significant that I never received another invitation to a party at this guy's home!)

I recently arranged for an interview with one of the Lamplighters. We had agreed on 6 p.m. as a meet time and Alison and I showed up on the dot of 6 p.m., to find that they expected us at 8. Fortunately later I was able to double check our e-mails and find that it was their mistake, not mine, but I did the entire interview feeling so terribly guilty for having disrupted their schedule and arriving two hours early!

I have done that so often that it no longer surprises me when I tell someone 400 miles away that I will be at their house at a certain time and I show up within 5 minutes of the time I said I would be there...even when there are freeway problems and other unexpected things that come up along the way.

Over the years, Walt and I have had some difficulties with my obsession with being on time since it is an obsession he does not share. He is more normal than I am! But he has gotten better about being on time (We haven't missed the opening of a single show in 12 years of reviewing), and I hope I have gotten a little bit more relaxed about being exactly on time everywhere we go.
Posted by Bev Sykes at 12:02 AM

Email ThisBlogThis!Share to TwitterShare to FacebookShare to Pinterest
Labels: time

John always says he married me because when he came to pick me up for our first date, I met him at the door ready to go. Fortunately, we're both pathologically early. He's mellowed some, but I haven't. He says I'd really be happy if I could only get to the airport the day before I'm due to fly. I usually have to settle for two hours early.

I live with someone like you. It is probably the single most contentious area of our marriage. As I've gotten older, however, I've moved in a more timely direction. It seems the most courteous way to be.