I was doing just fine, thank you, playing 65 well and winning all the money, when someone, who is related to me, but who is not my mother decided to put a curse on me. She tried several hex words, like BALDAZAR!, complete with ominous voice and wiggly fingers aimed in my direction, but she finally made points with the card gods with her curse of ADESTAPLEDES!!! said over and over again.

Oh it wasn't evident immediately, I still won the game we were playing, but the curse of adestapledes hung in the air overnight as I slept on the couch and this morning the gods of cards had left me hanging, twisting in the wind. I could not get good cards to save my soul. Through all of our games the previous day, I had never scored more than 40 points (remember at in 65 it's the lowest score that wins) while my mother bemoaned (as only she can bemoan) that her score was at least double either Peach's or mine.

This morning my score was 150.

Apparently Peach had made some great sacrifice to the god of cards and the curse of adestapledes had affected my ability to win anything. And I was even being a good guy. My mother had run out of money, and I was giving her money so she could continue playing. Out of the kindness of my heart (and my very, very heavy coin bag).

We have routinely had cousins days since it was no longer possible for Kathy to make the trip down to my mother's, but this was the first cousins day after Kathy's death and while there was nothing morose about it, it still was very sad that she wasn't there.

As I had promised at her funeral, "the boob" has now become Kathy and so when we had our mojitos and bruchetta, we included Kathy as well. We arrived at my mother's around 11:30, had our coffee-and-catch up session before lunch (clam chowder, crackers, applesauce) and then started the marathon 65 session.

We were delighted that this was a great time for my mother. Very, very little sign of that worrisome short term memory loss. At one point she forgot how to play the game and needed careful instructions, but it was like hitting a slick spot in a file and then catching her footing again. Peach and I both agreed it was the best we have seen her in months.

After dinner we played another couple of games, then retired to the living room for cheessecake and The Mentalist. Then two more games, and the adestapledes curse, then off to bed.

My mother woke up with a stiff middle finger that she had to work at to loosen up. We had some interesting suggestions as to what had caused it...but, you know, what happens at cousins day.... It did, however, open up an interesting discussion.

Three more games this morning before we packed up to leave. Another good Cousins Day, even if it is a smaller group. We won't get together again, now, until January and Peach may bring her sister, Mandy with us this time. We'll see if she wants to come.

But it will never be the same again without Kathy. Sigh. 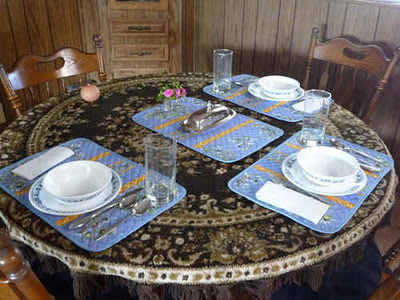