A Fall Afternoon in Davis

While so many other people were rushing around today making last minute preparations for Thanksgiving dinner, I was enjoying myself in downtown Davis. I finished my shopping yesterday and we are not celebrating Thanksgiving tomorrow, when Ned and Marta will be with her family, but on Friday, when we can all go to my mother's.

I have a turkey defrosting in the refrigerator, my menu planned out, and all day tomorrow to do the stuff that can be done here and Friday to cart it all to my mother's house to cook there.

So I went and had lunch with my friend Ruth today. We usually have lunch every 2 weeks, on Wednesday, at a Chinese buffet where it's all you can eat for $10. The food has always been good. It changed hands sometime during this year. Some of the food is better, some not so good, the service not as good as it was. But we're there to chat, not to critique the food or the service.

We haven't been able to get together for several weeks now because Ruth had dental surgery and hasn't been up to chewing anything, but now that she has graduated from bland food to soft food, she decided to chance it.

Walt went off to his old office for a few hours and I got in the car to drive downtown. It was a beautiful fall afternoon, with clear skies and a cool breeze. I made the u-turn by our house--you can't park on our side of the street because of an island in the middle of the street. 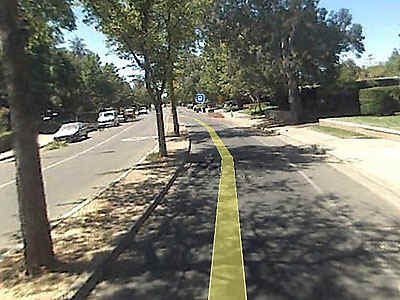 This picture was taken from Google Earth, so doesn't show that the trees right now are just going off-peak, with the leaves beginning to fall and the color beginning to deaden, but it's still a lovely ride through all those tree-lined streets of red and orange.

I turned on Russell Blvd and saw that the fire engines were out in front of the firehouse. I wondered why until I looked in and saw that the firehouse was filled with food boxes, filled with turkey and other food. Dumb me, I thought there was a food drive for Christmas until I turned the corner and saw people lined up for a whole block, waiting to get their Thanksgiving dinner and take it home. Sadly, I rarely come in contact with the people who have to stand in line for food. My failing that I don't get out and work more with those who are less fortunate than we are.

It was another couple of blocks to the restaurant. Usually parking is not a problem, but everything was socked in with cars and for the first time in a very long time I had to drive around looking for a place to park. 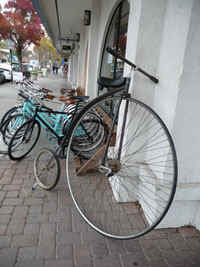 I finally found a place to park by the bike store which keeps an old-fashioned pennyfarthing bike in front of it. The pennyfarthing bike is the symbol of Davis and you find it on stationery, trash cans, and any sign that points you to any place of interest in town. There is even someone who rides this bike in town parades.

From here it's half a block and then into the middle of the parking lot to get to the restaurant. Ruth was already there waiting for me, having a small bowl of soup, since it was easiest on her tooth.

We had a nice chat about the subjects we usually chat about--theater, movies, movie stars, and books. I asked her if she had been following the activities on campus, which she had not because she doesn't take a newspaper. She was sort of aware of what had happened, but clearly not interested in discussing it.

We finished lunch and had jello for dessert. It's the only place I ever have jello and their jello is so solid you could use it for a tennis ball, if it were round. But she informs me that it's good for strengthening my fingernails!

I drove past Central Park, where there is a tent city for Occupy Davis, but with the parking situation, I couldn't find anywhere to park to go and look more closely, so I contented myself with taking this picture from across the street. 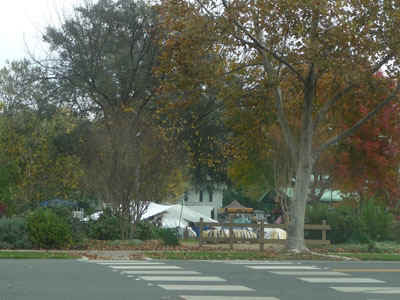 (It's a lot larger than it looks in this photo) This is not the campus gathering that you've seen on the news, but a second one in the city itself.

On the way back home, I drove through the parking lot at the Vets (Veterans Memorial Center) to see about the color on the David memorial tree, but I missed its peak of color. The tree is 15 years old, but not mature and so its leaves come and go more quickly than the other, older trees in town. But the other trees in the adjoining park were very nice, though not as spectacular as a week ago.

I stopped at the other end of the parking lot and looked at Brunelle Hall and thought about how different it is living in a town like Davis than a big city like San Francisco. I was in a parking lot that had trees with plaques for David and for Paul at one end and a building named for their teacher at the other end. I was a couple of blocks from the school which had been re-named for Jeri's 6th grade teacher.

It still feels odd living in a town surrounded by memorials to people that I knew when they were alive.

I returned home to the barking of Polly ("feed me!" "feed me!") and picked up two very welcome letters from the mailbox. Walt came and got the car to drive to San Francisco to go to the symphony, and as I write this I can smell the blackberry cobbler that is about to come out of the oven.

Tomorrow when everyone is eating turkey, we will probably have leftover meatloaf and I'll make a couple of pies for the next day. 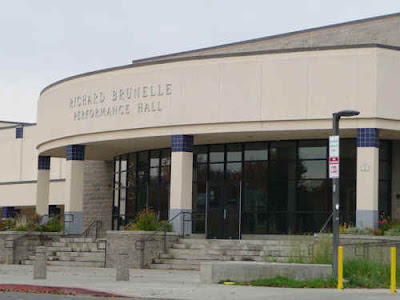 Email ThisBlogThis!Share to TwitterShare to FacebookShare to Pinterest
Labels: Davis

yeah we are not celebrating either so don't feel bad.

Oh, we're celebrating. We're just not doing it until tomorrow.