Oh to be a Dog

The dogs' day definitely is affected by daylight savings time. They now sleep later, even if I get up. This morning I woke up at 6 a.m. and sat in the quiet of the house for at least a half hour, while the dogs continued to sleep in the living room, Polly snuggled under the quilt on the couch, Sheila on the dog bed, Lizzie in one of the recliners.

All of a sudden all hell broke lose as all three dogs raced down the hall and into my office, tails wagging, rubbing their heads into my legs, pawing at my knees, licking my hands. Polly was barking her "it's morning and I'm hungry and why aren't you feeding me RIGHT NOW" bark. Dogs don't need coffee to wake up in the morning, it's zero to 60 mph in an eyeblink.

I've read a few memes lately which ask if you could change places with any person living or dead, whom would you choose? I don't want to change places with another person; I want to know what it's like to be a dog. I want to answer all sorts of questions that have been puzzling me since I've had time to be so close to our dogs and to study them so closely. 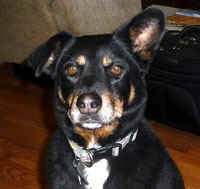 How do the dogs know when I'm going to give them a piece of my meal and when I'm not. How does Sheila know that I will give her toast crusts, but not English muffin bits. Yeah, I'm one of those terrible people who feeds the dogs from the table and know I shouldn't, but since we never have guests here for a meal, and since they all look so cute sitting there waiting (not begging, but just sitting there patiently waiting)....daring me not to give her a piece!

Anyway, I usually have toast for breakfast and I give the crusts to the dogs. But when I have an English muffin or a bagel, I don't share. Lizzie and Polly haven't figured that out, but Sheila won't even come to sit next to me if I'm eating an English muffin.

They go crazy for lamb, but how do they know before I take the meat from the fridge that I'm going to be cooking lamb for dinner? Why don't they get this excited if I'm going to cook chicken?

How acute is their hearing anyway. If Sheila is on the patio barking and I'm in my office with a wall behind us and I say, "Sheila NO" in a normal tone of voice, not shouted, she stops barking, while Lizzie can be barking and I can open the door and say the same thing to her and she doesn't pay the least attention to me.

How do all three dogs know, before I've even reached the refrigerator, whether I'm going to take out an apple or some cheese. If I'm headed toward the fridge for an apple, they keep on sleeping. But if I'm going to take out cheese, all three are at my ankles before I've even opened the refrigerator door. I have often marveled at the clairvoyance of dogs. 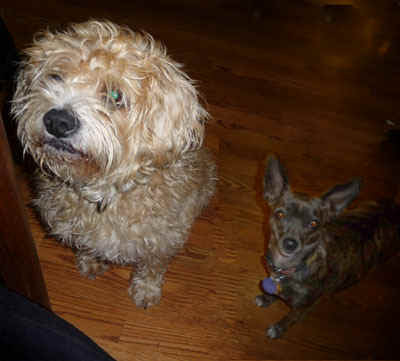 How does Polly know when I sit down and put on socks if I'm going out, or if my feet are just cold. If I'm just covering my cold toes, she never gets up. If I'm planning on going out later, she immediately leaps off her chair and comes up to paw at me before I've even gotten the shoes out to put on.

I know that we stupid humans give subtle clues to our plans that we aren't aware of, but I swear that sometimes it just has to be mind reading! Or maybe my body odor is different if I'm going out, or if I'm going to the bathroom.

Sheila seems to be suffering from anxiety again. When we were in So. California recently, our friend Jessica and her son were here to feed and take care of them and all went well, but I think that what with my being gone, the continuing upset of the new floor and other things, it's just been too much to handle. With no rug in the living room, she doesn't know where to sleep any more. She sometimes slept on the dog bed, but mostly slept on the rug. Now she will pace around trying to find a place to sleep.

She has actually taken to sleeping in the dog cage. She never went in a dog cage before this month. There is a blanket in there and the door is always opened. Polly will sleep in my lap in the recliner, Lizzie sleeps in Walt's chair and Sheila needs to be part of the pack, but there is no dog bed in here (Sheila tore up two of them), so she sleeps in the cage--or outside on the patio in the cold, where I guess she feels she is protecting us.

If I get up in the middle of the night, Sheila desperately wants me to sleep in the living room. Sometimes I do it, just for her. Then she is happy. Her world is OK again. I'm on the couch, Polly is on my back, Sheila lies by my side and Lizzie is either in a chair or on the table behind the couch.

But with all the things that Sheila seems to feel are upsetting, she has been pulling bunches of hair out of her backside to where there is a huge bald spot there. I have her on medication and an ointment, but so far she's still doing it. I'm hoping she will feel better soon before she denudes her backside! 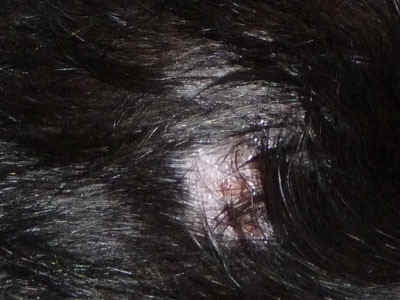 I love studying our dogs and trying to figure them out. I suspect it is much easier for them to figure us out. 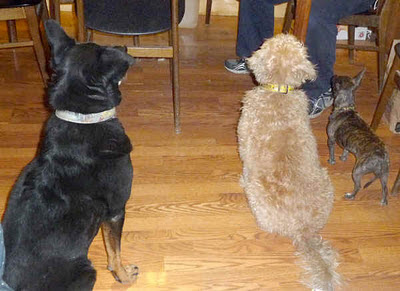 Email ThisBlogThis!Share to TwitterShare to FacebookShare to Pinterest
Labels: dogs

Inky, our lab of fifty years ago, always waited for crusts from my mother, but she required a "request." He obediently woofed twice for a treat.

But Cat, my daughter's annoying pet, starts meowing as soon as I take celery out of the fridge. He assumes I am going to make tuna.