Do you ever read something and get sidetracked by minutia? Like there's a story about some amazing political turn-around and you don't really pay attention to the story itself, but get distracted by the fact that you knew that it was Joe's restaurant where the participants were, not Joey's? Or was it really Joey's? Did you get the name wrong?

That happened to me this week when I began reading my friend author Alec Clayton's new book, "Reunion at the Wetside." I hadn't gone more than a few pages into the book when I was stopped short by something he'd written that nagged at me so badly that I had to come to the computer and send him an e-mail.

This is what he wrote:

The charge stemmed from an incident a month earlier when the octogenarian caused a ruckus in the Victoria's Secret store in Westwood Mall, when she was apprehended while attempting to shoplift a package of panties. The undergarments were priced at $12.00 a set. They were thong-style panties, which came six to a set in a variety of colors--red, black, green, blue, pink and yellow, size extra large.

Alec wrote back, Well you got me there, Bev. I didn't research it. There's always some detail I get wrong and then it looms large in the reader's mind no matter how small an item it is. I hope when you recover from the shock you'll enjoy the rest of the book.

I guess I can forgive Alec (with whom I share a birthdate...I think we decided I was older than he by a couple of hours) because he's a man and may not have ever gone shopping in Victoria's secret. I have never shopped there because first, I felt there was probably nothing in my size, but more importantly, because Ifelt it was an extravagance I couldn't support.

Along with frilly "everything else" since I started wearing maternity clothes back in the 1960s, I have never spent money on frilly undergarments, feeling they were merely utilitarian and why spend lots of money on something nobody ever gets to see. I understand I may be in the minority of opinion in this feeling.

I remember being embarrassed listening to an Oprah show one time where she talked about "granny panties" and how disgusting they were and how she wanted her audience to promise to never, ever wear granny panties 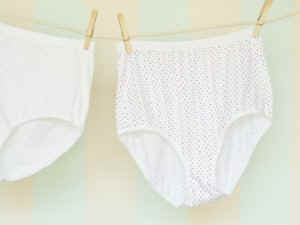 What the heck is wrong with "granny panties"?? They are comfortable, they do the job, the cotton ones don't cause skin problems, and they are affordable. I've been wearing granny panties for decades and buy them in sets (6 to a set, and even those sets cost more than $12!)

I took my granny panties to Australia in 2003 and remember when Peggy and I returned home from some errand one day and discovered that one of her dogs had apparently found a pair of my panties on my bed, ready to be folded and put away, and had taken the panties outside to play with. Peggy and the little girl who lived next door had much fun laughing about how it had probably taken both of the dogs working together to get them out the dog door, since they were too large for one dog to carry by herself.

Harumph. And I was much thinner in those days!

I dunno...it just seems that there are more important things to spend money on than fancy undergarments. But even if I were to shop for something fancy, it wouldn't be at Victoria's Secret, because I just couldn't justify that amount.

(I checked the Victoria's Secret web site and learned that one pair of thongs is $12...good lord. There's almost no material in thong underwear to begin with. $12??)

I have, however, gotten past my shock at Alec's gaff and have put it behind me so I can continue reading his book.
Posted by Bev Sykes at 12:02 AM

Email ThisBlogThis!Share to TwitterShare to FacebookShare to Pinterest
Labels: underwear