Thirty-something years ago, when I was working at the Lamplighters office in San Francisco, we would occasionally get free tickets to go and see a show when the producers of that show needed to fill the seats in the house and make it look like more tickets have been sold than really have (in show biz lingo that would be "papering the house.")

The first time I saw La Cage aux Folles was on one of those house-papering tickets. We also saw a rehearsal for San Francisco's famous Beach Blanket Bingo, which is most noted for its outlandish costumes. When we got to the theatre, we were told that we would see it without costumes and when we protested they did add some of the costumes back in again.

But the show that I remember the most vividly is a show that you have never heard of. The producer was Buddy Ebsen, from the Beverly Hillbillies. This was around the time he was appearing on TV as Barnaby Jones (though seeing him in the lobby of the theatre, as I inadvertently backed into him and stepped on his foot, I decided they must go through buckets of makeup before each episode, as, in person, he appeared at least 20 years older than Jones himself).

Anyway, the show was designed to spotlight good ol' Amurrican values and what is more Amurrican than good ol' apple pie? So this told the story of someone who had developed the best apple pie in the world and all the intrigue that goes on around mass marketing it. Now, I was sharing this experience with someone else who had been there and she remembers it as apple butter, not apple pie. But whatever.

The reason that I both remember this show so well and can't remember the important details is that I can probably say without argument from anybody else who saw it, that it was the very worst play ever written. I don't know how long it ran in San Francisco, but if it opened the next night after we saw it, I would be very much surprise.

Oh my word, what a bad, bad, bad play! It might have been a musical. I don't remember.

That awful show has been on my mind all week as I girded my loins and prepared to go and see the holiday show at Winters Community Theater, a show called "Fruitcakes" by Julian Wiles.

I love the Winters Community Theater. They are everything that is good about community theater. Their shows don't aspire to be anything more than a bunch of community people of varying talents coming together to have fun putting on a show. The cast for their holiday shows usually include lots and lots of little kids who look like they are having the time of their lives on stage.

I didn't expect much, though, about this show. I figured it might be as bad as the Buddy Ebsen-apple pie play, but we always go on opening night when they serve cheesecake and champagne to the audience and that helps sweeten any bad play. I wondered if they would serve fruitcake instead of cheesecake for this show, but figured that since the joke is that nobody likes fruitcake, they would have cheesecake backup.

We got to the community center, where the plays are presented, and yes, indeed, there was a plate of fruitcake on each table, but soon women came walking around offering pumpkin cheesecake or pumpkin pie along with champagne. I am a sucker for cheesecake.

The play started and, amazingly, it was really a fun play. Silly, funny, with good and not so good performances, but definitely a fun show. The kids were great, especially 5 year old Mikenzie, in her first time on stage, playing a "flying angel," giggling and waving to her family and friends in the audience. Adorable.

The story takes place in the town of McCord's Ferry, Georgia, and includes a cast that features the owner of a whirligig barn, a pair of spinsters who bake fruitcakes for everyone in town every year and are kind of a cross between The Baldwin sisters of Walton's Mountain and the sisters in Whatever Happened to Baby Jane. There is a 13 year old runaway, a six-times married neighbor who takes care of everybody in town, a fisherman who has PhD in Engineering from Harvard, but spends his days fishing, using poetry for a lure and a bunch of hunters in camouflage gear back from their first hunt of the season.

The scene of "the grand illumination," the lighting of the town policeman Beebo Dantzler's house, with the new addition of the well lit pig with the revolving tail, while all the townspeople stomp and chant was just what this story was all about--small town activities that go wild at Christmas time.

We had the very best time and I look forward to writing the review, because it's going to be fun.

I also smiled as we left the community center to note that almost all of the plates of fruitcake were left, full, on the tables! 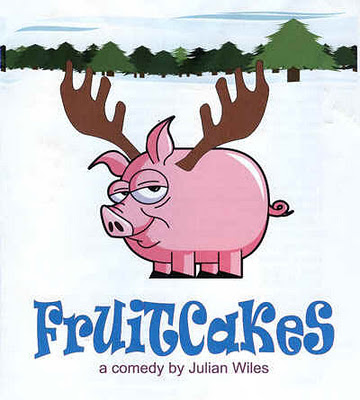 Email ThisBlogThis!Share to TwitterShare to FacebookShare to Pinterest
Labels: Winters

Oh my goodness stepped on Buddy ebsen's foot one would think you could have found a better way to meet him LOL !!!

More fruitcake bashing!! I have a blog on this very subject due to post next week.

Hey, Cranky, You didn't read the NEXT day's entry, where I confess to being one of those who LIKES fruitcake. You and I are kindred spirits!