Oh you're going to feel so smart when you finish reading this. Walt and I went in to Sacramento this evening to see a show and, as usual when my colleague Jeff isn't with us, we listened to "Says You." "Says You" is great for that drive because it's just long enough to get us through the round trip. Sometimes we finish a little before our drive has ended, sometimes Walt has to do a little driving around Davis for a few blocks until the show ends (you can't park in the driveway and listen to it because Polly is barking her food head off).

The last segment of the show tonight was about the words used to describe the way that certain actions are indicated in comics. They gave the example of GRAWLIX. You all know what grawlix is, though you may hever have heard the word. This is an example of a grawlix. 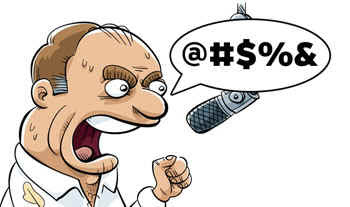 It's that collection of symbols to represent bad words being spoken by the cartoon characters. 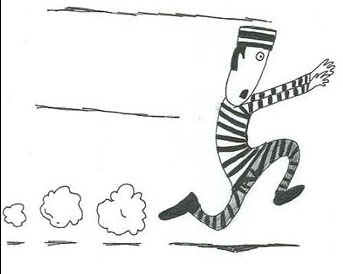 BRIFFITS is what they call the cloud of dust that hangs in the spot recently vacated by a fleeing character (thinks Roadrunner!) 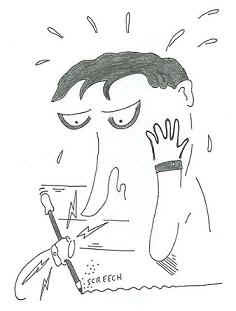 They call the flying sweat droplets around a character's head PLEWDS.

AGITRONS are wiggly lines around an object that is supposed to be shaking.

I couldn't find an example of STAGGERATION, but it is defined as the dotted lines tracing the path of an inebriated character. I became quite familiar with "staggeration" when I worked for the Physics Department at UC Berkeley. Only my boss didn't call it that. He called it the "random walk theory," which is the theory that each step a drunken man takes is totally random and there is no way to predict if he takes one step in one direction what direction his next step will be in. I typed so much about the drunk leaving a lamppost and trying to walk home that when the book ("Fundamentals of Statistical and Thermal Physics") was finally published, I gave my boss a little statue of a drunk leaning against a lamppost.

Now just think how smart you're going to feel the next time you see a cartoon and can tell your children or grandchildren what all those special marks are called.

Email ThisBlogThis!Share to TwitterShare to FacebookShare to Pinterest
Labels: Says You

I don't know anyone younger than a certain age that reads cartoons (especially comic strips) on a regular basis. That's part of why I share them.

I love learning new and unusual terms. :-) These are awesome!

I don't know what qualifies as "a certain age." My daughter is addicted to cartoons...of course she IS 45.