There are lots of horrible, disgusting things about the evolving Penn State scandal, but one of the saddest (aside from the victims themselves) to me is the rage that erupted on the campus when Head Coach Joe Paterno was fired for knowledge of the abuse that was happening in his own back yard, and his failure to do anything about it other than report it to university officials.

This brings back memories of all of the circling of the wagons to protect beloved bishops and cardinals in the wake of the pedophile scandal within the Catholic church. (It still infuriates me that Boston's Cardinal Law was called back to Rome, where he holds a position of prominence in the church there.)

We live in such a two-faced society, where we shake our heads and cluck our tongues about child pedophelia and rush to accuse a neighbor who may look a little odd to us or refuse to allow good gay men to be Boy Scout leaders, but when it comes to eyewitness accounts and reporting to "beloved" public figures, we kind of look the other way.

"How does McQueary, a 28-year-old grad student, look in the showers of a facility and see a grown man raping a 10-year-old child and not instinctively grab a baseball bat and protect this child? How does he live with himself?" asked Richard Hermann, legal analyst and criminal defense attorney.

There is also a mother's reporting of her son's molestation to campus police, after which Sandusky apologizes and police decide not to charge him with a crime.

The pedophilia was obviously known since Sandusky was forbidden to bring children to campus though he did bring a young boy with whom he reportedly had oral sex many times.

Sandusky was hired by Penn State in 1969, the first report of a crime was 1998, the eyewitness account was 2000 and it is only 2011 when charges are filed. Forty accounts and undoubtedly the number will rise.

The Judge (who is reportedly connected to the center that Sandusky established for at-risk youth) released Sandusky on $100,000 bail and he is not even on house arrest while awaiting trial. 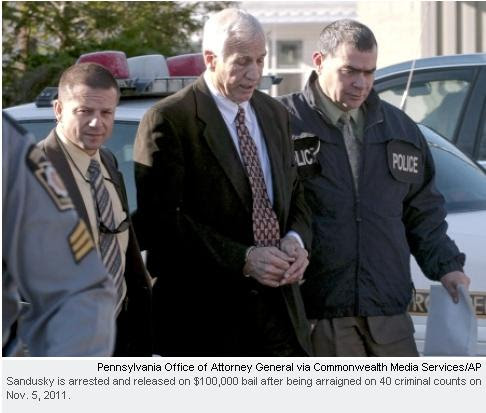 Imagine that it were a black man who were accused of one incidence of child molestation. Can you imagine any outcry of anger if he were fired from his job? Can you imagine his being released back into the community on his own recognizance while awaiting trial?

This whole thing makes me so angry I can't even watch it. And that anyone would be angry for the firing of someone who had knowledge that it was going on and failed to do anything about it infuriates me. To think that the university would put the football program ahead of the 40+ children whose lives have been ruined forever by this monster.

And Paterno talking about his "beloved boys" makes me sick to my stomach. 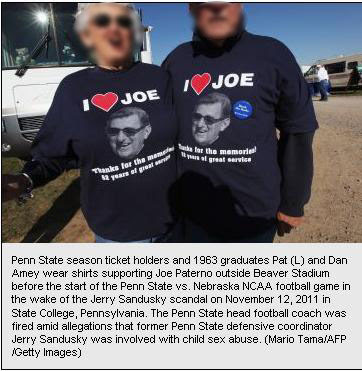 I wonder if these folks have sons...or grandsons.
I wonder how many people bought these sweat shirts
Posted by Bev Sykes at 12:02 AM