This is what we saw above the highway as we were driving to my mother's house this morning. 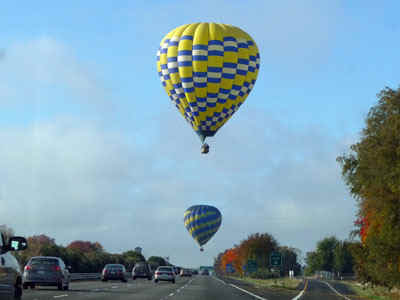 I hadn't seen balloons in the area in a long time--but then I hadn't been looking for them either. These guys seemed to be on their way to their final destination, but we wondered for a bit if they were going to land on the freeway or not.

I had been up since 5:30 and did my "Black Friday" shopping at the local supermarket, since I realized I had no chicken broth for the turkey stuffing. I bought some meat on sale and was the only customer in the store. My kinda Black Friday! Everything else was ready, so I just got the stuffing fixed and ready to go. We were on the road shortly after 9 a.m. and got to my mother's around 11, just enough time to get the turkey stuffed an in the oven, for an early dinner.

Ned, Marta and Bouncer arrived and immediately Ned and Walt started making plans for the puppet theater that Laurel has asked them to build for Brianna for Christmas. It was the prime topic of conversation for much of the evening and involved an emergency call to Tom in Santa Barbara to find out how tall Brianna is. 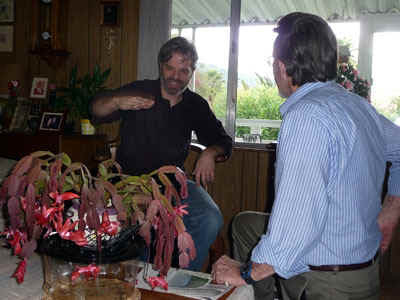 I wonder if Laurel knows what she unleashed, asking two theater guys to design a puppet stage for Brianna. These guys don't do things by halves.

Ned eventually got the potatoes peeled and boiling while I worked on getting the green beans cooking. Ned settled in for a chat with Grandma. 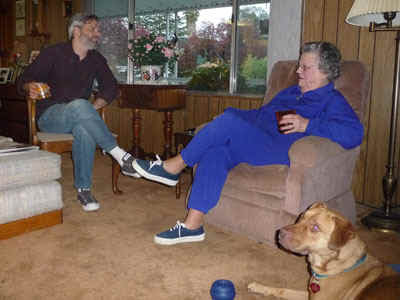 When the turkey came out of the oven, everybody got working--my mother on the gravy, Walt carving the turkey, Ned keeping the cord away from the electric carving knife, and Bouncer wondering if she would get any taste of the yummy goodies she was smelling. 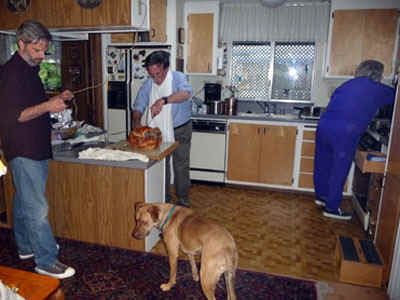 Marta, being the smart one, decided that too many cookes might spoil the turkey, so she settled in to read the book on her Barnes & Noble Nook.

When all was ready, we set the food on the table and got ready to eat. 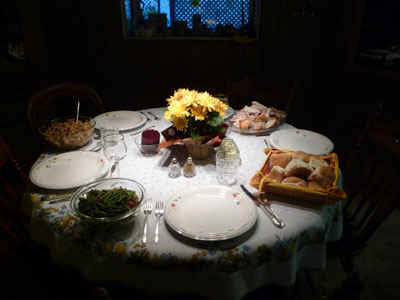 I was so pleased that everything turned out so well. The turkey, especially was nicely moist, the dressing was great (if I do say so myself) and the fresh green beans with bacon were really good. All in all, a nice dinner, a fun evening, and another holiday clicked off the 2011 calendar!

Not only that, but we were home by 8 p.m. in time to feed the dogs. 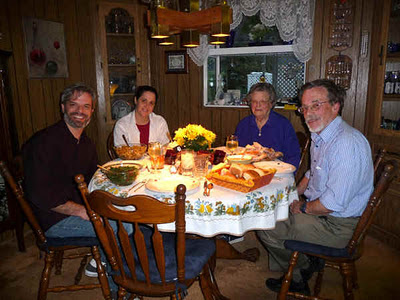 Email ThisBlogThis!Share to TwitterShare to FacebookShare to Pinterest
Labels: thanksgiving

The best kind of day - family, food, and fun. Ours is on for today. Turkey in the oven.

I usually like to celebrate the holiday on a different day as well . It seems kind of fun that way .