We stood in a big circle, holding hands and singing Auld Lang Syne.  I looked around the circle at all these auld acquaintances that we have not forgot and thought about how this party has been given for 43 years and we have been to many of them.  While they may not be my best friends in Davis, they are the people in Davis I've known the longest.

We have lost a lot of people over the years and as we are all getting older, many have chosen not to attend, but there were still lots of familiar face that I may see only on New Year's Eve, but enjoy getting caught up.

The hosts are The Psychiatrist and his wife, a former member of the Califoria House of Representatives.  There was the widow of a psychiatrist I transcribed for briefly many, many years ago.  He died 8 years ago.  His son, now pushing 50, was best friend to Vince, our student from Malaysia who lived with us for 3 years, so we saw him more then.  We had a nice chat with him, hearing about the 10 years he has lived in Thailand.

There were two there in wheelchairs.  One is our friend from the Davis Comic Opera company, whom Walt visits twice a month with two other people, to keep him occupied and gives his wife some time off.

The other person in the wheelchair was a woman who has had MS for many years.  She's been in a wheel chair for a long time.  She tried talking to me, but what with the fact that she speaks very, very softly, my hearing is bad, and the house was filled with people noise and music it was pretty hopeless to talk with her.

Artificial joints were a popular topic of conversation!

There were other old friends, some of whom I had the chance to chat with and some I did not.  One of my favorite people, the former head of the School Board for many years, arrived late and I waved at her but never talked with her, since we were mostly in different rooms.  My friend Nancy, with whom I join in Trump bashing lunches was there, but we just saw each other and were never in the same part of the house at the same time; a local nurse whose son wrote an interesting book called "Honeymoon with my Brother" was there but other than saying hi, we didn't talk.

Several people complimented me on my reviews, which is always nice to hear.  One of them was a woman with whom I had a run-in back in the start-up days of the Sunshine Children's Theater (1970s), when she said the reason Paul had been cast instead of her son, who was clearly the better actor, was that I had agreed to help organize the company and it was unfair favoritism.  She and her son left.  But Paul is long dead and her son is no longer interested in theater, so the hatchet has been buried long ago.

I made my Rolo Turtles to share on the food table.  They were a big hit. 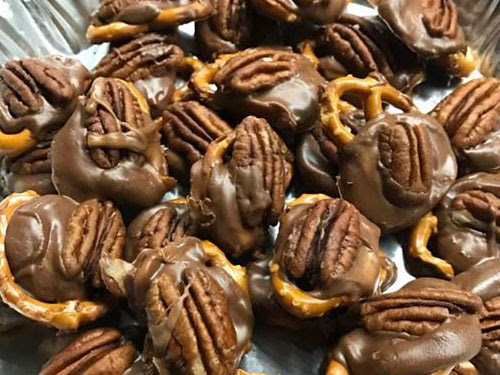 The thing I love most about this party is the Putah Creek Crawdads, a folk group which includes the Psychiatrist.  They perform every year.  They have had losses, the guy who, with his wife, was slaughtered by a teenager who wanted to see what it was like to kill someone a few years ago, the old guy who sang with the group into his 90s died two years ago and I think another member died of a heart attack before that.  But the Crawdads keep on rolling along.

People started going home before midnight, because we're all old now, and we nearly did too, but we ended up staying until after Auld Lang Syne and I'm glad we did. But we were home by 12:20.  I had not had a particularly energetic day, but my body didn't want to work when we got home, so I went to sleep instead of writing this entry.

Jeri and Phil, who had been to a party in the Bay Area last night, called on their way back to Davis and asked if we wanted to meet for brunch.  They were going to visit Grandma after brunch and then head to the airport for their return flight to Boston.  It was fun having one last meal with them. 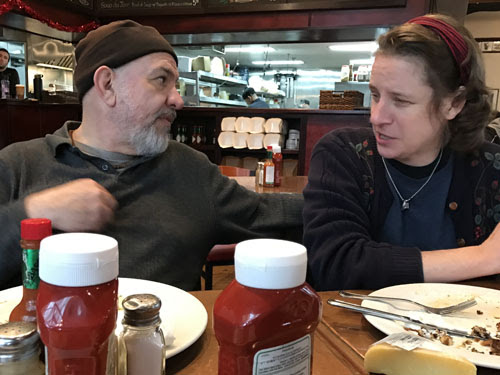 So it appears that the holidays are over.  Everyone is going back to normal and tomorrow I work at the hospital, so life goes on...