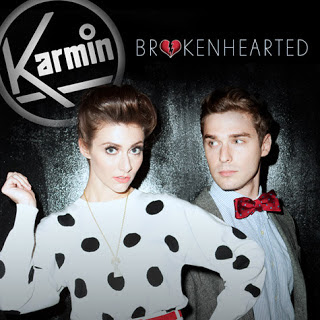 Welcome to Saturday 9. What we've committed to our readers is that we will post 9 questions every Saturday. Sometimes the post will have a theme, and at other times the questions will be totally unrelated. Those weeks we do "random questions," so-to-speak. We encourage you to visit other participants posts and leave a comment. Because we don't have any rules, it is your choice. We hate rules. We love memes, however, and here is today's meme!
Saturday 9: Brokenhearted (2012)

Unfamiliar with this week's tune? Hear it here
1) This song is about a girl who is eager and anxious for her new lover to call. Do you owe anyone a call? An email? A text?
I have a few SwapBot partners to whom I should be writing.  Also, following the death of Orva Hoskinson yesterday, I need to write to the co-founder of The Lamlplighters, Ann MacNab.  I think I owe her a letter anyway.

2) The lyrics are peppered with the informal English exclamation, "cheerio!" What pops into your head when you close your eyes and think of England?
Oddly enough--and this surprises me, since we have been to England so many times and have seen so many things--but the first thought that came into my mind was walking along Hadrian's Wall, also called the Roman Wall, Picts' Wall, or Vallum Hadriani in Latin. It was a defensive fortification in the Roman province of Britannia, begun in 122 AD in the reign of the emperor Hadrian. It ran from the banks of the River Tyne near the North Sea to the Solway Firth on the Irish Sea, and was the northern limit of the Roman Empire, immediately north of which were the lands of the northern Ancient Britons, including the Picts.

[thanks to Wikipedia for details!]  It was kind of Rome's answer to the Great Wall of China, though not nearly as impressive 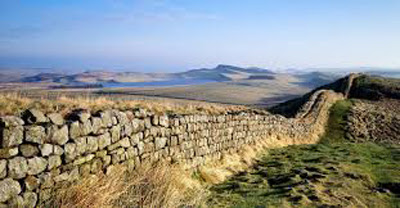 3) This week's artist, Karmin, is a husband/wife duo who met at college, and that meeting changed the course of their lives and careers. Think of someone who has had a huge impact on your life. Did you know, as soon as you met, that this was going to be a life-changing relationship?
There are a handful of people who had a life-changing impact for me.  I never thought in any case that this would be the result.  It all started with Sister Mary William, in high school, who invited me to be on the yearbook staff.  Out of that started a lifetime of writing.

4) Though she sings about consuming tequila, the female side of Karmin, Amy, is a big proponent of healthy eating. She recommends organic foods that are free of pesticides, hormones, food coloring and added sugar. Think about your most recent meal. Was it a good example of "healthy eating?"
I had lunch with my mother at Atria today.  Yucky meal.  Billed as "shrimp fajitas" but it was a limp, torn corn tortilla resting on top of some shrimp and a mounds of rice and refried beans.  Impossible to make a  real fajita out of the plate, but I suppose it was healthy, if not exactly appetizing.

5) Husband Nick has his own Twitter account (@NickKarmin), but he doesn't use it often. His last tweet was back in August. What's the last thing you posted to social media? (No, your blog doesn't count.)
The very LAST thing was a response to this article, which a friend sent me on Facebook 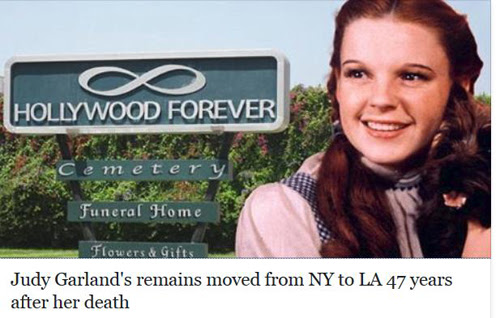 Before that, I shared a list of all the terrible things Trump has done in his first week in office (It's nearly a page long in tiny print, and enough to make one shudder.)

6) Karmin performed "Brokenhearted" live on Dancing with the Stars. DWTS is very big business for ABC-TV. So many people vote for their favorite couples each week that their phone and text systems often overload. Have you ever voted for a contestant on American Idol, DWTS, The Voice, etc.?
I may have voted for DWTS a time or two, but I haven't watched any of those shows in a very long time.  I OD'd on them.

7) In 2012, the year "Brokenhearted" was popular, the average cost for a gallon of gas was $3.91. In 2016, it had dropped to $2.40. When it's time to fill up your tank, do you shop around for the lowest price/gal.? Are you brand loyal and always return to the same station, regardless of price? Or do you just buy gas from the nearest station when you're running low?
I'm pretty much brand loyal to Shell, and Walt is to Standard.  It's not really a big deal for me, but the Shell station is closest to our house

8) In 2012, the Space Shuttle Endeavor was retired and placed on permanent display at the California Science Center, a Los Angeles museum dedicated to encouraging excitement and enthusiasm about air and space travel. Let's say you had a long weekend to spend in Los Angeles. Would you go out of your way to see The Endeavor? What else would you like to do during your time in the City of Angels?
I probably would not go to see the Endeavor, but I'd sure as heck get to the Hollywood Forever cemetery to lay a bouquet of yellow roses on Judy Garland's grave!

9) While we're thinking about aviation ... Statistics show that it's still a predominantly male field, and less than 10% of commercial pilots are women. Would you be nervous flying with a woman pilot?


Of course not.  One of my aunts was the very first female pilot to get a pilot's license in California, in the 19-teens.
Posted by Bev Sykes at 12:51 PM