1.) When was the first time you ever swore or said something profane?
I have no idea, but I'm sure I felt very naughty about it.

3.) What's a false assumption a lot of people have about you?
That I must be witty and outgoing.  (I am, but only on paper.)

5.) If you could bring one person back from the dead, who would it be and why?
So many choices.  Maybe my son Paul (whose birthday would have been today) just to find out what exactly happened the night he died.

6.) What did you do on December 12th last year?
Oh, I love having a blog and a log of what I write each day!  On December 12 last year, I wrote a mini biography of my mother, with the idea that it would help caregivers know who she was before she got dementia.

7.) When was the last time you truthfully told someone you hated them?
I don't think I ever told anybody I hate them.  Too strong a feeling for people I know face to face.  There are a few politicians that I might say that about....

8.) What is your opinion on this song? What about this song?
You Tube wouldn't let me see the first song, but the second song, though written in 2010, made me feel like a Hillary supporter at the end of Trump's first week in office.

9.) In less than four sentences, describe the entire plot of the last book you read.
Well,, the last three books I read were non-fiction, but the last plot book I read was "Nineteen Minutes" by Jodi Picoult, which was the story of a mass shooting at a high school, by a kid who had been bullied all of his life, with lots of background information and the shocking revelations at his trial.

10.) Describe the appearance of the most untrustworthy person you can think of (they can be a person you've met or a made up person). Are they male or female or neither? What about their appearance makes them untrustworthy?
Well, he's tall, overweight, has weird hair, wears suits that are never buttoned with usually a too-long red tie.  He has squinty eyes and a sarcastic mouth that rarely smiles and the personality of a petulant toddler.  Actions make him untrustworthy.

11.) What is the most cringe-worthy thing you've ever seen?
The inauguration of the untrustworthy person described above

12.) What is your biggest regret?
There are lots of things I regret, but I take the positive position that I am the result not only of the good things that happened in my life but also the bad.  If this bad thing hadn't happened, that good thing would not have happened, etc.

13.) Do you have any cousins? When was the last time you saw them?
I have 32 cousins, but only two or three that I ever really knew in my life.  All three of those are dead and I miss them every day.

14.) Describe the worst birthday you've ever had.
I honestly can't remember a bad birthday that I've had.

15.) When was the last time someone provoked you to the point of violence?
I am not a violent person

16.) OH NOES!!!! Someone has gotten you to drink a truth potion and now you have to truthfully answer every question you are asked!!! What's the worst possible question someone could ask you?
I'm certainly not going to reveal that here!

17.) Describe, in detail, your first serious relationship. Describe how it ended.
My first boyfriend was named Bill.  We started dating when I was 13 and we dated for four years.  Our relationship ended when he decided to become a Jesuit.  He has been in the Jesuits since 1960

18.) Introduce your best friend. Tell the story of how you met. 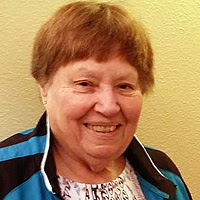 This is my friend Char.  I first saw her in about 1961, when I moved into a dormitory at UC Berkeley.  It was a double dorm; I was in the smaller dorm and she was the grad resident for the larger dorm.  I was immediately afraid of her because she seemed strict and didn't seem to like me (though in reality she probably didn't notice me).
Later, we met socially at the Newman Center on campus and became friends.  After I quit school, I lived with her husband and baby for a few months while I tried to get out of credit card debt.  When she and her husband and two kids moved to Alaska I wrote to her frequently (she says my letters helped keep her sane in the Fairbanks winter, pregnant and trapped in a cabin with two toddlers!)
When they returned we lived just a few blocks apart.  Her 5 kids and our 5 kids grew up as siblings to each other (and now, 50 years later still act like siblings when they see each other)
We did wild and crazy things in those years (like trying to fit two large live Christmas trees into her small Saab, having pumpkin pie baking sessions, and a few pumpkin pie fights, etc).
In our later years, Walt and I went on several cruises with her and her husband, until her husband died a couple of years ago.
We live about an hour apart now; she is in a retirement community, but we try to get together as often as possible.  I had lunch with her last week and we are going to a show together next month, for example.
(I also have taken embarrassing photos of her all throughout our nearly 60 years as friends and she is just so glad that I now have access to social media to make all of them public.)

19.) To the introduced friend, has our interviewee lied in any of these questions? Are you surprised by any of these answers?
Well, she's not here to defend herself, but I suspect she would agree with everything I wrote.

20.) To finish up, what is your biggest irrational fear and how did you get it?
The only big irrational fear I have is that a semi-truck is going to roll over on top of me while we drive next to it.  I developed that fear in 1986 and I still don't know why and I still have it. As a kid I also believed there were snakes under my bed.  I got over it by growing up.
Posted by Bev Sykes at 10:50 PM