I've been trying to do this every year toward the end of December, so here goes.  The whole questionnaire runs 50 questions.  Part 1 ran on December 28.

27. Did you drink a lot of alcohol in 2016?
I lost my taste for alcohol many years ago, and water is my drink of choice now (with the occasional coffee).  I may have an occasional glass of wine on a special occasion or maybe a gin and tonic if we are at a bar, but that is less than half a dozen times in the year.

28. Did you do a lot of drugs in 2016?
Only legally prescribed ones: for diabetes, for high blood pressure, and for cholesterol. Also some vitamins.

30. Did somebody treat you badly in 2016?
Nobody that I can think of, though I have had a few disappointing encounters with my mother's long term care insurance provider.

32. What do you wish you'd done more of in 2016?
After seeing two movies this week, I wish I had seen more of them throughout the year instead of only six.  I also wish, as always, that there had been more socialization with female friends.

33. What do you wish you'd done less of?
Attend memorial services for friends (5 this year)

35. What was your favorite TV program(s)?
Jeopardy, Big Bang Theory, NCIS (the original as well as New Orleans and LA), Madam Secretary, The Blacklist, Designated Survivor, Criminal Minds, SVU, Speechless, Rachel Maddow and, when it returns, The Amazing Race.

38. Did you have a favorite stage show in 2016?
I wrote this for one of the newspapers for which I am a critic:

There were several plays from which to choose in picking my five favorite productions this year. In no particular order...

Gospel According to First Squad is the very powerful third in Tom Burmester’s "War Cycle," which attempts to show the effects of war on the combatants and their families. It was presented by U.C. Davis and deserved a broader audience.

The Davis Musical Theater Company has grown a lot in its 30+ year history and its recent Music Man was excellent, with one of the best Harold Hills I’ve seen (Richard Wall, in his DMTC debut). It also produced a superlative Man of La Mancha, with a magnificent set and professional quality cast.
Bells are Ringing, part of the Davis Shakespeare Ensemble’s summer festival reminded us how good the old musicals are, and had the quintessential musical comedy couple in Gia Battista and Ian Hopps.

Capital Stage’s Blackberry Winter was a tour de force one woman show about the effects of Alzheimers on an adult daughter. Amy Resnick gave a riveting performance that was both heartbreaking and funny at the same time.

39. What was your greatest musical discovery?
You cannot hum the score to Rogue One

40. What was the best book you read?
"Elephant Memories: 13 Years in the Life of an Elephant Family" by Cynthia J. Moss
I loved this book.  Moss spent 13 years in Amboseli National Park, following elephants and observing their interactions, their behaviors, how they handle everything from birth to death.  A great book for an elephant lover.

41. What was your favorite film of this year?
We only saw six and of those, I think my favorite was Room because I had read the book and was glad to see it in "real" life.  I also loved Sully and cried all the way through it!

42. What did you do on your birthday, and how old were you?
I turned 73 in February and we had no celebration on my birthday because we were both busy, but later in the week we went to a new-to-us restaurant, one where they set fire to your food in front of you before they serve it to you, and that was a lot of fun 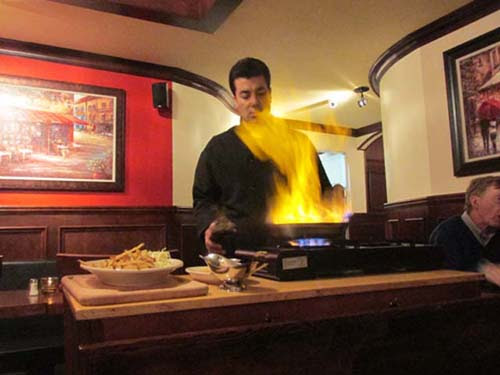 44. What did you want and not get?
A ceiling light for the kitchen and a Democratic president.

45. What one thing would have made your year immeasurably more satisfying?
If Donald Trump had been devoured by a Chtorr.

46. How would you describe your personal fashion concept in 2016?
I don't need no stinking fashion concept.  I'm comfort all the way, in sweats, t-shirts, sweatshirts and fuzzy socks.

47. What kept you sane?
I guess writing, and communicating with women from SwapBot.  Also NCIS or SVU marathons to turn on when the news gets overwhelming.

48. Which celebrity/public figure did you fancy the most?
Cindy Stowell.  Check her story.  Amazing woman.

49. Tell us a valuable life lesson you learned in 2016.
Never trust all media stories, fact check everything, and even if you are the better candidate, an effective false smear campaign can lose you the election.