I had my monthly lunch/bitch session with my friend Kathy yesterday.  Things are so scary, watching Trump systematically destroy everything Obama did in the past 8 years and feeling so helpless to do anything.

It seems we no longer live in a country which supports free speech, since the EPA has been given a gag order not to write on social media or give interviews about anything that is happening with that department (including information on climate change).  But there are work-arounds and anonymous people from the EPA have set up information Twitter accounts on personal computers, so until the new administration decides to have certain accounts banned from Twitter, we can still find out what is going on.

I have tried many times to get into Twitter, unsuccessfully.  I even took a class once trying to find out how to make heads or tails of it, but so much seems to be originating on Twitter these days and my new phone makes it easier to check that bit of social media and I'll tell ya watching our new president tweeting, especially on this business of the millions of illegals who voted and cost him the popular vote (no supporting information) it's like watching a toddler standing there stomping his foot and shrieking.

This whole insistence that, evidence to the contrary, he had "the largest viewing audience in the history of inaugurations" and that, evidence to the contrary, up to 3-5 million cases of voter fraud, which robbed him of the popular vote.  (Research has found only four episodes of voter fraud and one was a woman who voted twice...both times for Trump.)  He has to be the biggest, the best, the highest, etc.  I heard this morning that he is ordering a "major investigation" of the illegal votes.  How much is THAT going to cost the tax payers, for essentially nothing but to feed his ego?

I think it was when he signed the go-ahead with the pipeline that he introduced it by saying that he was a great lover of the environment and had received many awards for environmental action.  This self-aggrandizement is disgusting and unbecoming the head of our nation and a terrible thing to show people in other countries.

However, in other news, while I was sitting at lunch with Char on Monday, I was rubbing my arm through my long-sleeved shirt because it itched and there was a lump.  I pulled back the sleeve and saw this. 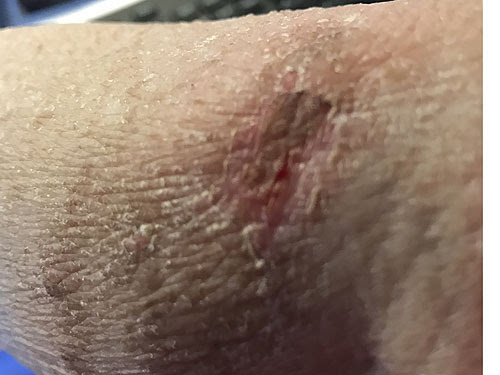 It's a nearly cured scar from when I set my arm on fire.  At the time, there was no sign of any burn on my arm and I never thought about checking it the next day, but apparently I should have. But it's almost back to normal now. I will remember to check for signs of injury the next day, the next time I set myself on fire.

After lunch, I went to Atria.  I had been there the day before, but my mother had been sleeping.  I sat there for an hour, reading, waiting to see if she would wake up, but she never did.  I had bought a bunch of junk food for her, since she hasn't had any food in her apartment in awhile, and I left her clean laundry on the bed.  I also wrote a note for her, that I left on her chair and then came home.

She was awake when I got there yesterday, but lying on the couch.  The note I left for her was still sitting on her chair, so she had not sat in that chair at all yesterday.  I somehow feel that she saw the note and thought someone had put it there and she was not supposed to remove it and just sat on the couch instead.

She got up and sat in her chair, reading my note several times, each time asking me if I had written it.  Then she'd put it down next to her and then see it again, as if for the first time, and read it again.  She is having difficulty recognizing words now and so she reads slowly and has to sound out many simple words.

The other thing she spent time doing is looking at a photo of her 90th birthday party. 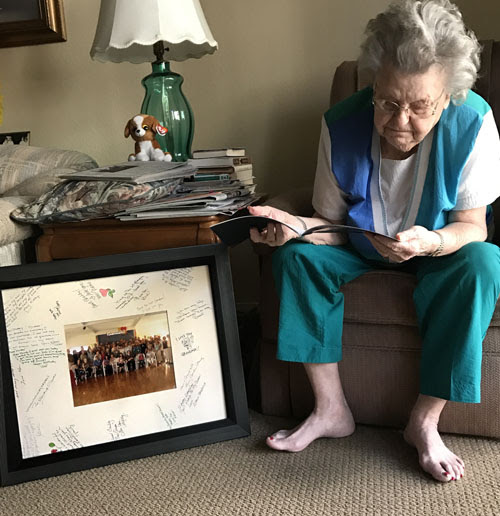 This framed picture sits on the floor next to her chair and from time to time she pulls it out to look at it and ask what it is.  It is a picture of all the people who came to her 90th birthday party and any of them signed the border of the frame into which we were going to put the group photo.  She looks at the photo and doesn't recognize anybody.  Yesterday I found the book I made for her after the party and showed it to her, reminding her about what fun she had at the party and how many people came to celebrate with her.  She doesn't even recognize me in the photos and doesn't always recognize herself.

But even with how depressing it is to leave her at the end of a visit, it's still not as depressing as coming home and watching the news this week.
Posted by Bev Sykes at 6:35 AM

Email ThisBlogThis!Share to TwitterShare to FacebookShare to Pinterest
Labels: lunch, My Mother, Trump