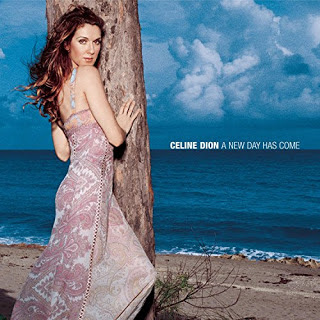 1) This song is about a new day. Here we are celebrating a new year. What do you hope for in 2017?
I hope that Trump will eventually realize the enormity of the job he now holds and starts acting presidential, not like a petulant teenager who is gonna do what he wants to do and the rest of the world (and the country) be damned.

2) Ms. Dion has said this song was influenced by the events of 9/11, and how a new day dawned after tragedy. Looking back on 2016, did something happen that you're glad to leave behind and move away from?
I'm very glad that the hateful contentiousness of the presidential campaign is over, but I'm afraid we can't yet leave it behind and move away from it.  Country Dew says that the campaign "crushed her soul" and I'm afraid a lot of us in this country feel the same way.

3) In the video, Celine serenades us from billowy white clouds. Describe the sky where you are as you answer these 9 questions.
It is grey and off and on the skies open up and give us the gift of rain.

4) This video was shot in West Palm Beach, FL. When settlers arrived in the late 1870s, the town was called Lake Worth County. OK, your turn. Tell us something about your hometown.
Well, my home town is San Francisco, but I've lived here in Davis for nearly 44 years, much longer than I lived in SF.  Davis used to be a small farm town and eventually built a campus of the University of California which, when I was working at UC Berkley was always called the "farm campus."  But it's a big, well respected campus now and the town has grown from a sleepy country town to a small/big city.  It is much bigger than when we moved here and I am enough of an "old timer" that I resent the changes.
Geographically it is very flat, so it is known as the city of bicycles.  Though the outer boundaries have expanded in 44 years, still if you drive just a shrt distance you are in the "country" where there are orchards and horse farms and other signs of "country."
Basically, this was a great place to raise kids and their lives are significantly different than they would have been if we raised them in Oakland, where they were born.
5) Celine Dion's native tongue is French. Dites-nous quelque chose en Français.
Je parl un peu de Français.  En école, le Français etait un sujet favori.

6) Celine's mother, Therese, is known in her Quebec neighborhood as a terrific cook. Think about your own domestic talents. Where do you excel? (Food prep, house cleaning, laundry, scheduling, etc.)
Well, it's definitely not cleaning or laundry.  I guess I excel in cooking, since I do like to cook and try out new recipes.  It's the thing that has kept Walt from strangling me, I think! (Also, I know the intricacies of the TV remote and that, too, is a saving grace.
7) Growing up, Celine and her siblings often performed in her family's piano bar. Where did you most recently enjoy an adult beverage?
Adult beverage?  Oh!  I remember.  I had half a glass of wine at Christmas.  I rarely drink adult beverages, though I do enjoy them when I do.

8) In 2002, when this song was popular, Kmart was in the news because the company filed for Chapter 11 bankruptcy protection. What department store to you shop at most often?
Unless Target, which I visit occasionally, is considered a "department store," I can't remember the last time I was in one.  I may visit Target once every 2 months or so.

9) Random question: It's time for a midnight snack and you have your choice of one of these three -- a slice of sausage pizza, a bagel with lox and cream cheese, or a piece of carrot cake. Which will you have? And what shall we bring you to drink?
Hmmm....Well not the carrot cake.  I'm torn between the pizza and the bagel, but "cream cheese" may be the deciding factor.  As for a drink, please refill my glass with ice water and I will be a happy camper.
Posted by Bev Sykes at 1:32 AM