Life is going to be so much easier...and more fun...now that "alternative facts" are popular with the new administration.  I have a few alternative facts of my own and it's time to get them off m chest.

Alternative Fact:
That fat old lady you see pictures of on this journal frequently isn't really me.  In real life, I'm middle aged, slim, and beautiful.

Alternative Fact:
I laugh when I post pictures of that messy house, since I am compulsively neat and tidy and my house is a real show place.

Alternative Fact:
I rarely watch TV (and when I do it's only PBS specials).  In real life, I love the outdoors and you can usually find me hiking or biking somewhere in the country.

Alternative Fact:
My mother doesn't really have dementia.  At 97 she is remarkably mentally sharp and a real social butterfly who is involved in many activities at Atria and has a large circle of friends with whom she spends her time each day.

Alternative Fact:
Polly isn't really a pain in the butt.  She's a loving little dog, who always has a wagging tail and who loves everyone, especially guests who visit our house.

Alternative Fact:
Donald Trump won the popular vote, if you discount the millions of illegal votes cast
(Real fact:  number of illegal votes found--4, and one of those was a woman who voted twice--both times for Trump) 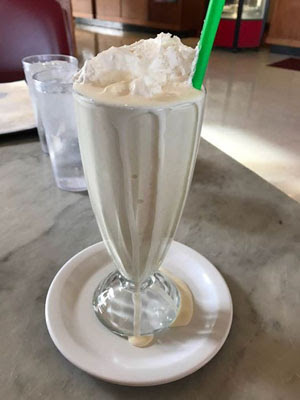 I am a health food nut and when I had lunch with Char yesterday, I had a big salad and did NOT have a delicious vanilla malt while I waited for her to arrive.

Oh yes, the world of alternative fact is a pleasant one, where you can believe whatever you want, whether it's the truth or not.  The sad thing, of course, is that there are real facts that the rest of the world has to deal with.

I finally decided that this new sleep schedule is because I am so depressed about our 45th president and his actions the first three days of his administration (Siri: how many days in four years? - "1,460," she says.  3 down 1,457 left to go.) that I just want to sleep until it's all over.

Back to real facts.

Char and I had what seems to be our February Fenton's luncheon.  We don't specifically plan to eat at Fenton's each February, but I've checked a few of our previous lunches and it seems that we are always meeting at Fenton's Ice Creamery in the Nut Tree shopping center in February.  I have offered many times to drive down and meet her somewhere closer to her house (mine is only about 20 minutes away from Fenton's) but we both love their crab salad sandwich, which is unlike anything we have found elsewhere, and Fenton's makes the only malt-tasting malt that I have had since I was a kid, so I don't protest when she says she really doesn't mind driving all that way.

Naturally, our conversation centered around the Orange Menace and what he is doing to this country in only 3 days.  We also agreed that these silly assertions--about voting numbers, crowd sizes and other things that have dominated the airwaves since the inauguration are merely a cover-up for what is going on in the Oval Office.  So far he has raised mortgage rates on FHA loans (which affects primarily military families), set the wheels in motion for repeal of Obamacare, with no alternative in sight, cut funding to any health center that disperses abortion information, which is going to remove routine health care and contraception advice for millions of families around the world and removing the stop on the pipe line.  But you don't hear talking heads spending an hour discussing those.  They are discussing alternative facts and proving that they are NOT dishonest when they report things.

I heard a talk show host say "why does he persist in saying these things" and I think it's blatantly obvious ... it's a smoke screen and we are more likely to get irate about those than about what he is doing, in the meantime.

Since this morning he released this tweet saying he really won the popular vote but so many illegals voted that it skewed the vote in Hillary's favor, I wonder what other destruction of the Obama legacy he has in mind for us today.

May it all come back to bite him in the butt...and soon.

I think I need to go back to sleep now.

"The Party told you to reject all evidence of your eyes and ears. It was their final, most essential command."
George Orwell, 1984
Posted by Bev Sykes at 8:10 AM

Bev, I've enjoyed reading your blog for several years. I think you are a very talented writer. But as someone who voted for President Trump I find myself feeling irritated whenever you denigrate him. I find the behavior of many Democrats we see on the news horrible. They don't seem to be tolerant, compassionate, etc unless one agrees with them. I don't understand how you guys think and would like to. Can you give some insight why your way of thinking is better than mine as a conservative?

I am fearful that Mr. Trump's childish tantrums, his insistence that he be the biggest, the best, the most wonderful person, willingness (this week) to spend a lot of money to prove what seems unporovable hat MILLIONS of voters voted illegally, just so he can say that he really won the popular vote?

Most statements he has made during his campaign have been proven to be false, and so you have to double check whatever he says because he doesn't think before he says something. The Today Show seems to have a segment of its news devoted to fact checking statements Trump has said.

He has the nuclear codes and can start a world war, yet he doesn't think of the consequences of a tweet (like he wants to go to the middle east and steal the oil...it is not ours to take, you know!), which makes it difficult for the natives on the ground to want to help us fight Isis.

I disagree with him on almost everything. reversing the Violence against Women act and closing rape crisis centers, taking away funding from any clinic that even gives contraception advice will affect millions of women around the world, who count on the United States for their health care.

I see how he has treated those around him, and I don't like it (he made Romney come crawling, thinking he had a chance to be Secretary of State and then shut him out. It was total vindictiveness).

The Republicans decided on the day of his inauguration that they were not going to let Obama get any bill pass and they fought him every step of the way. That was based on nothing other than that they didn't like him. He still managed to do great things, and now Trump is trying to undo all that he achieved despite Congressional obstruction.

I have watched the media in the past few weeks be respectful of Trump and his new position, but the more he lies and the more his "alternative facts" are proven to be lies, the more the press is beginning to call a spade a spade and call him what he is--a powerful liar who is looking for power and who can possibly destroy this country and countries around the world.

He is trying to muzzle the press and has issued an order that people in the EPA are not to give interviews or publish on social media, which means the citizens have no idea what he is doing (or not doing) to clean up the atmosphere.

He went to the CIA, taking 40 people with him to applaud him and blatantly lied when he said he had no problem with the CIA, when two weeks before he had compared them to Nazis.

I have friends all over the world who are very afraid of how Trump's actions will affect their countries.

And that doesn't even begin to discuss his attitude toward woman and how for giving his supporters seem to be about his "grab 'em by the pussy" comment and other actions which show how he feels about women.

I disagree with, but respect the views of conservatives, but this is a bad man and I"m not going to pretend that he is not. I'm sorry if that means you no longer want to read me, but I'm not going to be silent when I feel that people need to speak out.

I think many of us have an understanding what people in Germany felt like when Hitler was coming to power and they had the choice to be silent or speak out. I feel I need to speak out.

This just appeared on another page: I read the other day that he is planning to put thru legislation that would make it a crime to protest peacefully, and that if anyone is in the area of one of these protests, they can lawfully run into them with a vehicle and mow them down. I kid you not.

Not verified, but something to think about. I've heard this from more than one person.