The Pleasure of Your Company


Truth to tell this is an old entry, but I came across it today and liked it so much I decided to reprint it, since I really didn't do anything today but have lunch with my mother.  So here goes...
It seemed a fairly innocuous invitation. The kind I've had many, many times through the years. "You are invited to a bridal shower...."

The party took place nearly 15 years ago, now, I guess.

The party was for one of the medical assistants in the office in which I worked. It was being held at the home of one of the nurses.

This party had a bit of a twist. Like a Tupperware party, only this was for "intimate apparel." We would have the chance to view some fancy lingerie and perhaps choose to purchase something at the party for a shower gift for the bride.

Most of the women in the office attended. We were a social bunch to begin with, but I suspect that the unusual nature of the party intrigued those who might otherwise have sat the evening out.

When we arrived at the house where the party was being held, it suddenly dawned on me (duhhh...I can be dense sometimes)...that we would be viewing a bit more than simply "intimate apparel." It turned out this was from a home-shopping sex store and when we arrived we were greeted by a table with a dazzling array of penis-shaped objects in every size, shape, and color.
Well. This was a new experience.

As the party started, I began to get a whole new appreciation for what's available for the purpose of enhancing sexual pleasure. There were feathered things and creams and powders and things that vibrated or rotated or did both. There were books and unusual toys. We played a game,
There was much hilarity, a lot of red faces as we took turns either eagerly or gingerly examining each thing that was passed around, taking little licks of flavored things, watching moving things and making comments.

When it came to the lingerie, the bride-to-be modeled a few very expensive things and some of us went in together to buy her something.

Finally the saleswoman began packing up her wares and the hostess was getting the shower cake ready for serving in the kitchen.

The doorbell rang. And he stood there. The cowboy.
The main event.

He quickly identified the bride and gyrated up to her, and began to disrobe. He was obviously quite experienced and had us all laughing at our guest of honor's discomfort.

As usual, I was hiding behind my camera, and snapping photos as fast as I could to distance myself from what was going on in the room. I was also joining in on the laughter watching what was going on. The bride-to-be seemed to be enjoying herself, even though very embarrassed, so I didn't feel I was laughing at her discomfort.

She was definitely a participant in what was happening. 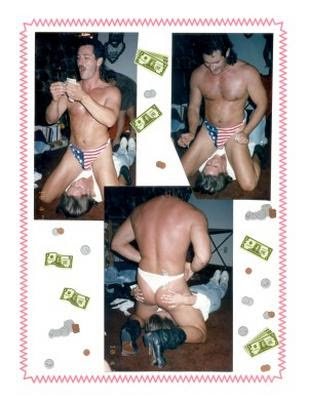 But eventually he seemed to have run the gamut of attention paid to the guest of honor and then he uttered those fateful words: "Now let me go have some fun with your friends..."

I was outta that room in an eyeblink. There was no way I was going to participate in the "fun." It was very definitely not my idea of fun. Not when I was the recipient.

I did my usual run to the restroom while the noise of shrieks and gales of laughter followed me. I decided I couldn't stay there forever, and noticed that there was a room off to the side of the bathroom, which I knew from previous visits to be the computer room. I went into the room. It was pitch black. I found a chair in the very farthest corner and I just sat there listening to the noise from the party.

At one point the hostess came in looking for something, saw me, asked if I was ok, and then turned the light out again when she left, leaving me in the dark.

When the noise finally subsided, I crept out and back to the rest of the group. I don't think anybody had noticed my absence.

I learned that day that the idea of watching some hunky guy in a string bikini bumping and grinding in front of a group of women is very definitely not my idea of a good time. The photos were a lot of fun and I'm glad I was able to take them. But "enjoy" the strip part of the party? Nosireee. Very, very definitely not my cup of tea.


The next day I discovered that there was another guest hiding in the bathroom, so I was not the only one uncomfortable!
Posted by Bev Sykes at 1:20 AM