I am getting more and more blasé about getting these entries written in a timely manner!  I am sleeping very well and when I wake up at 7 a.m., I don't immediately leap up thinking "omigawd, I didn't write an entry last night!" and race to the computer, I pull the quilt up over my head and go back to sleep for another hour or so, then get up, feed the dogs, fix breakfast and eventually make my way in here to write the entry.  Which means that more and more now the entry for today is actually being written today. 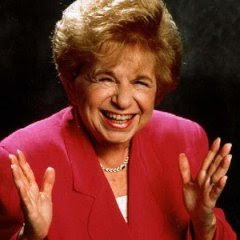 Remember America's favorite sex therapist, Dr. Ruth Westheimer, "Dr. Ruth"?  Little old German grandmother who doled out sex advice matter-of-factly and would discuss anything (except bestiality - "I'm not a veterinarian") without embarrassment.  I don't know if her wildly popular radio or TV shows are still on.  I understand she is now 88 and lives in an apartment in Washington Heights, New York.  (I just checked and she now has a web site and answers questions on the web, so she's obviously still around)

There is now a play about her called Becoming Dr. Ruth, which we saw last night (it's even mentioned on her web site).

She is an amazing woman with a past as checkered and as interesting as Julia Child (who used to work with the OSS during World War II because she was too tall to join the WACs). I loved this bit of Julia Child trivia I found on Wikipedia:  "When Child was asked to solve the problem of too many OSS underwater explosives being set off by curious sharks, her solution was to experiment with cooking various concoctions as a shark repellent, which were sprinkled in the water near the explosives and repelled sharks. Still in use today, the experimental shark repellent "marked Child's first foray into the world of cooking..."

For Dr. Ruth, born Karola Ruth Siegel, the path was different, and much more difficult, but she, too, was a child of World War II, and most of Becoming Dr. Ruth deals with her travels from that little town of Wissenfeld to the airwaves of first, New York and later the whole country.

Though not a religious family, Ruth's father made sure she knew about her Jewish heritage.  She obviously worshipped him and when he was taken by the Nazis to a work camp, she remembers that the last vision of him was his smiling face waving at her.

She was fortunate that she was able to be sent to safety in Switzerland through the Kindertransport program.  The last word she had of her family was a letter in 1941 and she later learned they had been killed at Auschwitz.

Homeless at 17, she emigrated to British controlled Palestine, where she lived on a Kibbutz., where she had her first sexual experience...and liked it.

She joined the Haganah, part of the Israeli Defense Force, but because she was so short (4'7") she was trained as a sniper, where she was wounded by an exploding shell during the Israeli War of Independence in 1948 and it took several months before she could walk again.

She moved to France to study and eventually teach psychology at the University of France, then immigrated to the U.S. in 1958, where she eventually (after a lot of difficulties) was able to get her MA in sociology and EdD from Teacher's College at Columbia.

She got her first radio show in 1980, a 15 minute show that quickly expanded to an hour, it was so popular.  And the rest is history.  Radio, TV, books, popular guest on many TV shows.  She is not hesitant to express her feelings on just about anything sexual.  As the play starts, she is on the phone with a moving man who was coming the next day to pick up her boxes and move her across town and ends up giving him advice on his sex life.

The play was a delight, but the pre-fame part was more interesting that the post-fame part. When the show ended there was to be a talk back with the actress who played Dr. Ruth, one of the theater writing interns, and a holocaust survivor.

The talk-back started with the writer inviting the survivor to give her story, which she seemed reluctant to do.  But within seconds, she was on her feet telling her story, and what a story it was.  She was quite soft spoken, but you could hear a pin drop as she told harrowing tales of fleeing from the Nazis, trying to make it across the mountains in the wintertime to then unoccupied Poland, walking by day and hiding at night, her feet wrapped in newspapers because she had no shoes.
When the war ended and liberation came it was almost worse because they could find NOBODY who would take them.  No country was willing to help the refugees and her story was so depressingly like the story of the Syrian refugees.

The talk back ran long (and nobody else got a chance to talk or ask questions!), but it was easily the most emotional part of the evening.


Hey, did I mention that I set myself on fire the other night?  I was wearing a very old, very ratty sweatshirt which had lost all of its elasticity.  I was cooking on two burners of the stove and was resting my arm in front of the burner with the highest heat.  All of a sudden flame leaped from the burner to m arm and I looked down and my sleeve was on fire.  Trying to get to the sink (just a couple of steps), I slipped on something on the floor and nearly fell.  Fortunately I quickly ran the arm under water and put the fire out.  No damage to me, but the shirt was ruined beyond repair.  Fortunately it was a shirt I've been thinking for months that I really should throw out, it was so tattered.

Did you see Dr. Ruth on CBS Sunday Morning (I think) last Sunday talking about her doll house collection? Interesting.