You May Have Noticed...

...that I am writing a journal entry.  Group cheer, please.

It was not a good night for me.  Facing the prospect of disconnecting from life support I didn't sleep well.  By the time morning arrived (after thinking about it for several hours), I decided that we could not do what Ned planned to do (move my desk over near the TV on the side of the room opposite the dining room table) because the computer must be connected to the phone line and that would require running a line all over the family room.

I decided that what we should do instead is to move everything remaining in the office except my desk, let Ned clean around me, wash 3 walls, paint 3 walls, and then when that is all done, I'd shut down the computer and move it to the opposite of the office and he could finish the remaining wall.  I was rather proud of myself for coming up with that scenario.

I forgot one thing...trying to argue with Ned is like trying to argue with Donald Trump.  Once he has his mind made up, he doesn't hear anything you have to say.  He and Walt put their heads together and decided that they could put the desk where the dining room table is and move the table to the other side of the room.  That way the cords would just have to go around the corner of the wall.
I could see there was no winning this argument, so, nervously I agreed.  I don't know why I was concerned.  I mean Ned is the tech guy.  He has been doing stuff like this for most of his adult life.
So they moved the table and that area was now a part of the expanded staging area. 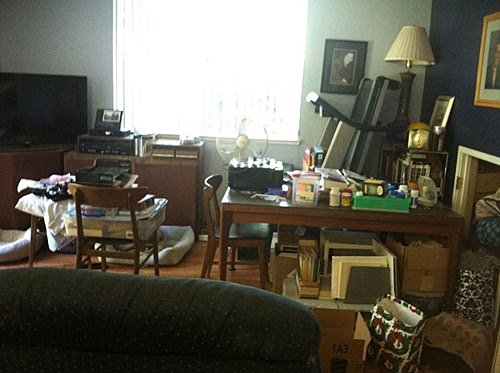 Next, gulp, the move 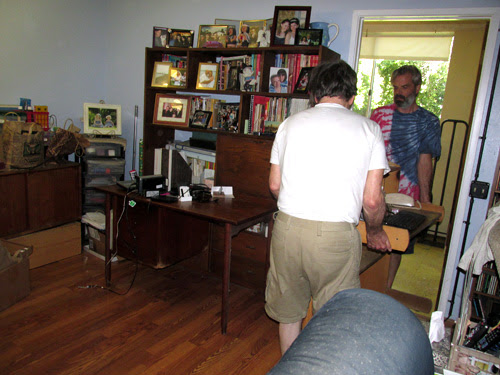 While they were doing that, I took the opportunity to go through four boxes that were stored here during the Big Clean a year ago for our 50th anniversary.  With the help of Logos, the SPCA, paper recycling and general garbage, I managed to get four big boxes down to ONE not quite full of stuff that I wanted to keep.  Which freed up more boxes for sorting books. 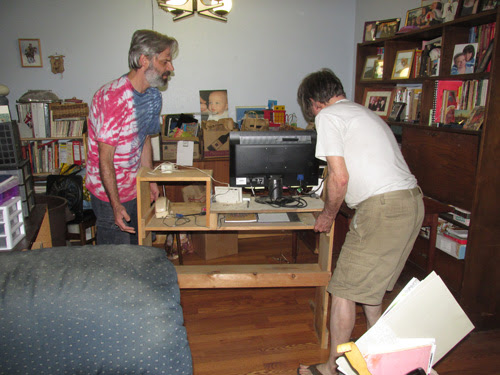 When the two desks were in place, all they had to do was hook everything up an make sure it worked.  I'd say success was instant, but it took a bit, but they fiddled and fiddled until it was right and now I'm set up again. 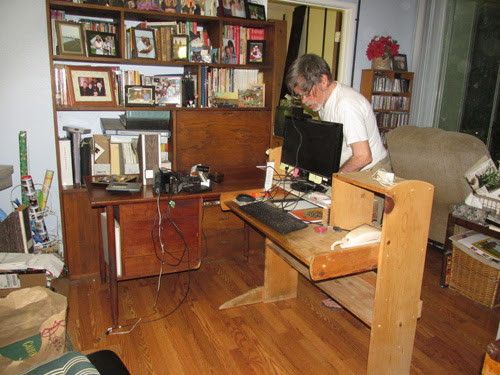 My desk now faces the big TV in the family room but nothing is perfect.  My computer monitor completely blocks it, but if I sit to the side of my desk and tilt to the right, I can watch it.  Fortunately, most of the time I use the computer as white noise and don't really watch, but just listen
So at the end of the day, Ned was right. 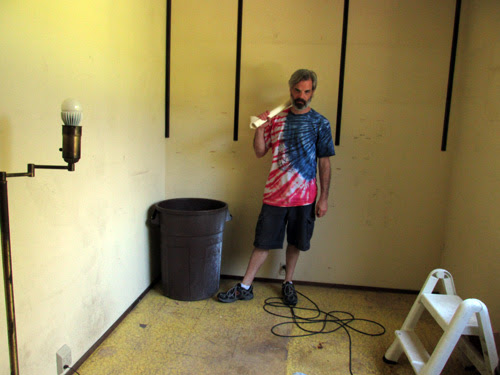 Tomorrow or Thursday he's going to start getting the walls ready for paint, then he's off to Santa Barbara helping Tom with his remodel...and at the same time checking the paint I think I want to paint the office (which Tom is painting one wall in his house).

I can't believe Ned is doing all this for me.  It's painful, but it's necessary and he's a great pusher.  If my office gets neatly put back together, it will be 90% Ned's doing.  How special I feel. 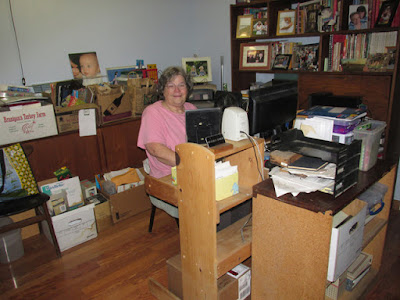