Walt and I (and the dogs) listened to "Says You" again this afternoon and while listening to the radio I managed to get through two boxes of "stuff" and throw away a lot of it.  I actually have the garbage can almost filled again. Ned will be so proud.

Most of the stuff was photographs, though lots of negatives, which I threw away, and some oddball things like...why in the world do I have Gilbert's musicians union membership card from about 1980 or currency from Hong Kong and Brasil which has been replaced in those countries by new currency.
But, as with an awful lot of these boxes, most of the things were photographs and, of course, I had to go through them before deciding to throw any away. 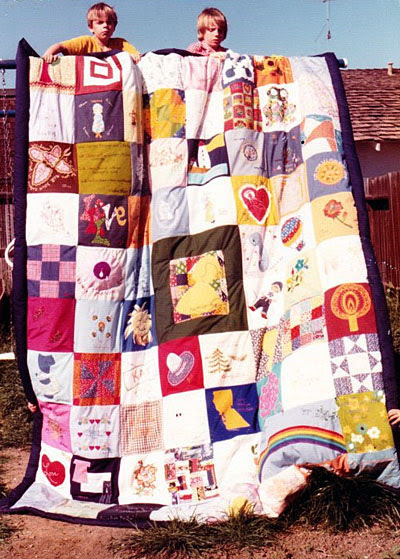 Some of the photos reminded me of when I was creative.

Take this quilt for example.  The woman who had been in charge of La Leche League was moving on and I decided that we should give her a quilt to thank her for her years of work.  I had taken a quilt making class during the year so I thought a lot in terms of quilts.

I solicited squares from every leader in California.  They all sent me their squares and I put them together into one gigantic quilt.

I was so proud of that thing.

It was so big the only way I could get a picture of it was to have Ned and Paul stand at the top of our gym set and hold it.

I wish I could remember the actual ceremony where we presented it to her, or her name, or anything else about this.  But all I can remember is the quilt and I was pleased to find this photo buried among the rest of the photos.

But that wasn't my proudest moment.  My proudest moment was with the Lamplighters.  After we finished writing the first Lamplighters history, I stuck around and worked as a volunteer for about five years, until Gilbert died in 1986, commuting one or two days a week from Davis to San Francisco.  I did a lot with the Lamplighters.  I learned how to work a computer.  Gilbert and I started a newsletter that is still going today (though now it's an on-line letter).  We wrote several shows together.  A lot of stuff.

But my proudest moment concerned the great contralto, June Wilkins.  June had been the leading contralto (all those full figured characters W.S. Gilbert made fun of in the operettas).  She had a tremendous voice and was wonderful on stage.  I was surprised when I interviewed her for the book how shy she was and how lacking in self esteem.

While I was working for the company, June finally decided it was time for her to retire.  I was shocked to realize that there was to be no big goodbye for her at all.  That just wasn't right.  I browbeat the Lamplighters general manager and he agreed to honor June at the conclusion of the current production.  It was during the time when I was doing cake decorations, so I decided to make 3 sheet cakes to serve to the audience.  Each was decorated with a picture of June in one of the costumes she was so famous for wearing. 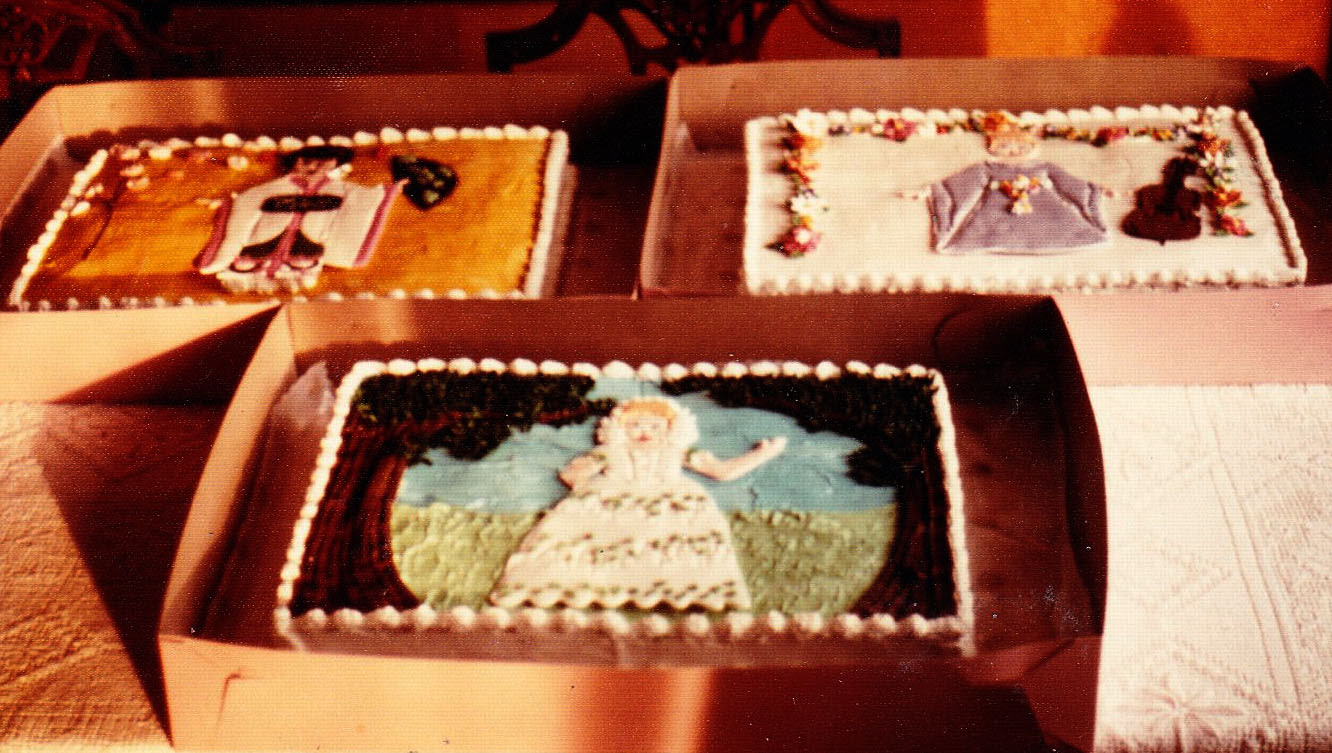 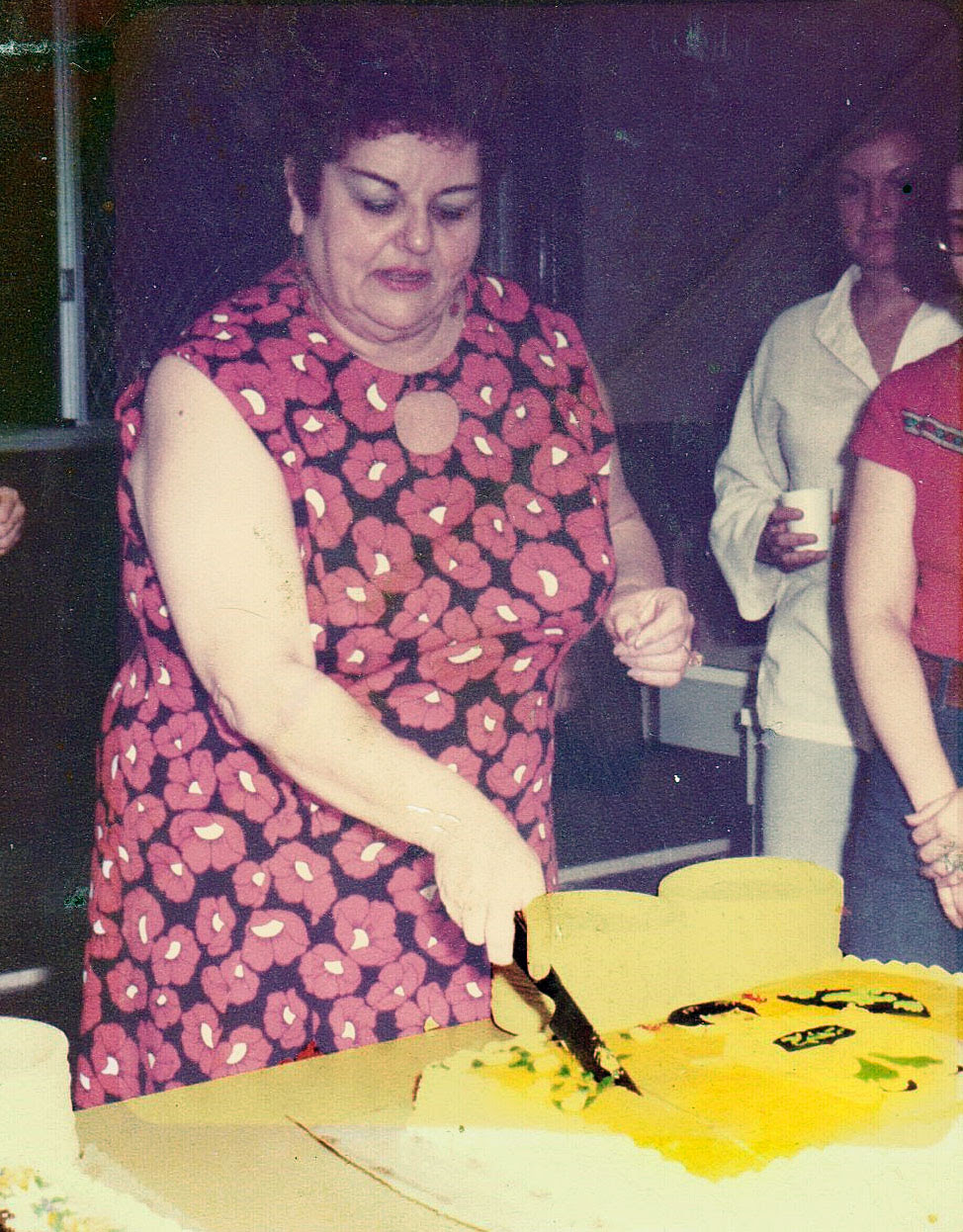 So at the conclusion of the show, they brought June up on stage for some nice words and tumultuous applause from the audience.  I stood in the wings with tears in my eyes, watching her realize how special she had been to the company all those years.

Then we went downstairs and she cut her cakes and we served it to the people from the audience who joined us for refreshments.

There were lots of accolades here too, and she was very definitely the center of attention.

To my knowledge, she never knew I made the cakes.  I'm sure she thought they came from a bakery.  But I didn't mind.  It still stands out in my mind as one of my favorite days in all the years I worked with The Lamplighters.

Sadly, June died many years ago, as have many of the friends I made during those years, but it was a golden time for me...and I'm so glad that I took photos of some of the events, though I don't have a lot of Lamplighters photos, because I was too shy to take a lot of pictures.  But finding these two pictures today was a real treat.
Posted by Bev Sykes at 12:00 AM