What's In a Name?

I woke up thinking about Reince Priebus.  I couldn't get back to sleep, wondering how a baby came to be named "Reince."  I can't imagine looking at a newborn and thinking "He looks like a Reince."
I had to check the internet, at 2 a.m., to learn about Reince Priebus.  Turns out his first name is NOT "Reince" but "Reinhold."  Same question.

The old TV comedy Night Court was directed by Reinhold Wegge and I remember one episode where they discover attorney Dan Fielding's real first name, which was "Reinhold."  Reinhold? the cast asks, incredulously.  (Amazing that I remember that episode!)

These are the things that keep me awake at night.

In this day and age, baby names are all over the map.  We thought "Jerilyn" was weird, but it can't hold a candle to children named Apple (Gwyneth Paltrow), Kal-El (Nicholas Cage thought it would be fun to name his son after Superman's father!), Mowgli (Ashley Simpson, who loves "Jungle Book"), Satchel (Woody Allen ... I wonder if he ever lost the kid in a train station....) and Zuma Nesta Rock (Gwen Stefani). The rapper T.I. named his son YaMajesty.  Can you imagine mom standing on the back porch calling kid to come home for dinner.

Before saddling your child with a name you should always try it out as a "call name."  We learned that after our friends Michele and Richard named their dog "Milhous."  Imagine going around the neighborhood calling 'Hey, Milhous! Here, Milhous."  (This was when Nixon was still in office).  Yeah, we had a weird dog name (Ho Chi Mutt), but we only ever called him Mutt, so it wasn't really the same as Milhous.

In doing research on weird celebrity child names, I discovered that singer Erikya Badu's child, Seven, was named because a clerk typing the birth certificate left off the "t" in Steven.  But they decided to keep his name as Seven.

I still always put at the top of my "names you shouldn't call your kid" list the children of the Seed family who were enrolled in our nursery school.  Huckleberry, Caraway and Sesame.  Nice names, but with Seed?  I once did a Google search on Huckleberry and discovered that apparently he is a professional poker player best known for winning the main event of the 1996 World Series of Poker.  Turns out he's won more than $5 million playing poker. It wouldn't surprise me if Caraway and Sesame married early just to get a new name.

I found a photo of one of my favorite highway signs on US-50 today.  I have tried several times to get a picture of it, but we're always going too fast, with too much traffic behind us to get a good shot of it. 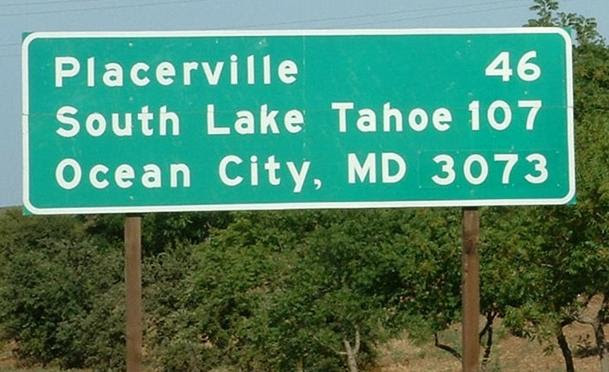 I also found the back story in "Roadside Distractions."

Why do we let motorists know how far it is to Maryland?  Placerville is about an hour away, and South Lake Tahoe double that, depending on traffic. But why does far-off Ocean City, Maryland merit a mention?

The simple fact is that US-50 paves 3,000-plus miles from Ocean City Maryland to Sacramento California, but there’s more to the story.

In the 1980s John R. Cropper, Jr. worked as the head of statewide highway maintenance for Caltrans. Cropper, now 92, was the man who instigated the sign listing Ocean City, MD as 3073 down the road.

“Years ago, I was back in Ocean City, and they had a sign that said, ‘Sacramento California so many thousand miles’ so I thought, ‘well, that’s a pretty good idea, we should reciprocate,’ so we did," Cropper says.

“I can remember I got a lot of static from Caltrans people because I had been conducting a campaign to get rid of unnecessary signs — and this really was an unnecessary sign,” says Cropper with a wink. “It didn’t mean anything to anybody except people who had some connection — anyway, it’s still there as far as I know.”


The original sign Caltrans put up indicating the terminus of Highway 50.

This sign ended up costing the state quite a bit of money because it kept getting stolen. According to a 2002 article in the Sacramento Bee, the sign was stolen twice, once in 1999 and then again two years later. Caltrans redesigned the sign to include the distances to Placerville and South Lake Tahoe, making it bigger and harder to throw in the back of a truck.

On the other side of the continent, we found David Buck, a spokesperson for the Maryland State Highway Administration. Buck’s father, Ed Buck, was a Maryland highway engineer in the late ‘70s and early ‘80s. It was his idea to mark the eastern end of Highway 50 in Ocean City.

“Highway signs obviously are very regulated, in terms of what you can put up there. So when you put something up that’s a little different, or a little unusual like this, people take notice,” says the younger Buck.

“I think it’s neat that my father was part of something that lasted that long," Buck says. "It’s interesting and unique — it’s not standard.”
Posted by Bev Sykes at 12:00 AM