Sandy had a very light morning this day.  Only six sales.  I anticipated a light afternoon.  I was so wrong!

We had brought in 2 bags and one box of books and my plan was to choose one that I wanted to read and then if I got involved in it to bring it back home again.  I chose one by Ann Tyler and read at that off and on throughout my busiest afternoon ever an ultimately remembered that I really don't like Ann Tyler.  I know she's considered a great, beloved writer, but I've just never gotten into her stories.  Of course it could have been that I had no time to actually read during the four hours.

The beginning of the afternoon didn't hint at the business that would follow, with a woman coming in looking for "The Book Thief" and leaving when she didn't find it.

An odd looking young couple arrived.  He was a very tall very skinny Asian and she was a short kind of chunky Latina.  They spent a long tie looking at cookbooks and bought about six of them.

A woman bought "Organic Chemistry for Dummies" which was from the bargain books.

A man looking for old books by Lewis Carroll but left when he didn't find one.

An old woman, using a cane like mine, was sitting at the front desk.  A woman who seemed to be her carer arrived carrying a Target bag, which contained a pile of books to donate.  The woman chose new books -- 4 bargain books, 1 biography, and 1 Literature and we put them in her Target bag.  She waited inside the store while her carer went off to get the car to pick her up.

Later, I discovered another woman sitting on the floor reading, obviously making herself right at home! 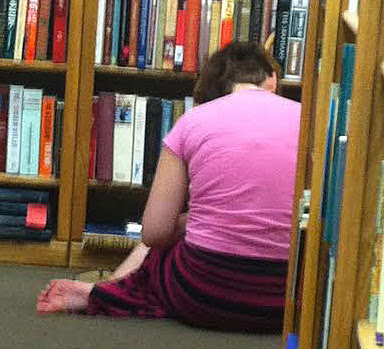 A friend of our and his new wife came in.  She bought a 4 bargain books and was carrying her own copy of one of the "Cat Who.." books.  She told me she had just learned that the author Lillian Jackson Braun had died.  She paid and started to leave, but a few minutes later she was back with a Peter Mayle book and we talked abut how much we both liked his books, especially his "Year in Provence."  And then, while I talked with her husband, she was off to look at dictionaries and bought 3 of them.

A guy with a cap bought the incongruous collection of 3 literature books and 2 novellas.  He commented on the odd mixture.

A hefty guy bought 2 Spanish novellas, 1 contemporary fiction (in English) book and one self improvement book then asked if I knew where he could buy some towelettes, since his hands were sweaty.  I couldn't think of a place nearby but sent him to Newsbeat, which sells newspapers and magazines, but which was the only place I could think of that might have those.

A couple came in.  I assumed they were visiting parents of a UC student.  He wore a Cal Aggie hat and she had a shirt that said "Davis Mom" on it.  He bought two books, including a Hemmingway that was published in 1941.  She complained at the $5 price when the original marked price was only $1.25.  In 1941.  He paid the $5.

There was a rather odd looking woman who wore what looked like a scarf around her hair that wove her own hair into the knotting of it to resemble a turban.  She had earbuds in her ears and though she was rather zaftig, she wore black leggings with a blouse hanging over them. She was very nice and bought $50 worth of books n art, fantasy and fashion.

There were a couple of love birds kissing in the stacks.  They bought two bargain books and left the store, entwined.

A guy was sitting at the front table reading, his foot bouncing to the music playing over the radio.  A friend joins him and they shared something funny.  Their friendship hit me as endearing.

A woman bought a copy of "A Beautiful Mind." 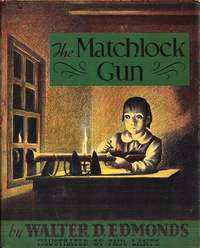 A couple bought a children's book called "The Matchlock Gun," which seemed a strange title for a child's book.  But it is apparently a Newbery winner.  I was going to check it on Amazon, which has the name listed, but no information on it, so I went to Wikipedia and found out more about it.

The Matchlock Gun is a children's book by Walter D. Edmonds. It won the Newbery Medal for excellence as the most distinguished contribution to American children's literature in 1942.

The book is set in the year 1756 during the French and Indian War in Guilderland, New York. Ten-year-old Edward Van Alstyne (throughout the book, he is called "Ateoord", which is his name in Dutch) and his mother Gertrude (Trudy) are determined to protect their home and family with an ancient (and much too heavy) Spanish matchlock gun that Edward's great-grandfather had brought from Bergen Op Zoom in the Netherlands while his father Teunis is away from home with the local militia fighting the enemy (using, to Edward's disappointment, a musket instead of the matchlock).

The book's foreword states that this is a true story handed down from Trudy's descendants (Trudy became widely known as an expert spinner, having been taught by her mother who, because of her crippled shoulder, could no longer perform the task).

Anyway, reading the Wikipedia description made me sorry I hadn't looked more closely at it.

An older distinguished man with a wonderful grey mustache walked with difficulty and wandered around the store forever but finally bought a bargain book, a book on Korean history and a couple of others.  Ironically at the same time another guy was looking for a book on the history of Korea.

There were three more customers, each with an armload of books, who were lined up to pay and I never had time to record who bought what.

My last customer was a man who bought 3 self improvement books and a teeny book of "cat sayings," which, if I had seen it first, I would have grabbed because the pages were the perfect size to cut up an use on pocket letters.

When I heard from Susan this morning we had taken in $438 for the day, which was certainly a surprise, given how slow a morning Sandy had.

Davis lost one of the "good guys" yesterday.  Our friend Larry Fanning lost his battle with cancer.  We have known Larry and his partner of 40 years, Stephen Peithman, for as long as we have been in Davis.  We met them through the Davis Comic Opera Company and have worked and partied together for many years.  Larry was a loving, helpful, very religious guy who had his demons to battle over the years, but he died at peace.  We are so glad that we had the chance to see him and say good bye a couple of weeks ago when Steve called to ask if we could come and witness Larry's signature on the update to his will (when he realized that the original had been written so long ago, man of the beneficiaries were now dead).