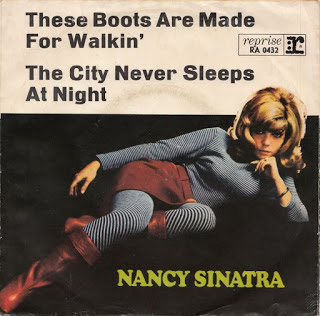 Welcome to Saturday 9. What we've committed to our readers is that we will post 9 questions every Saturday. Sometimes the post will have a theme, and at other times the questions will be totally unrelated. Those weeks we do "random questions," so-to-speak. We encourage you to visit other participants posts and leave a comment. Because we don't have any rules, it is your choice. We hate rules. We love memes, however, and here is today's meme!

1) In this song/video, Ms. Sinatra's boots make a serious fashion statement. Do you choose footwear for comfort or fashion?
Good lord....definitely comfort.  I gave up "fashion" back in the 1960s after I killed myself on what were then spike heels (which would now be considered low heels!)  Most of the time I wear Berkinstocks.
2) This is by far the biggest hit of Nancy Sinatra's career, which includes 6 top ten hits. Can you name another?
The only other one I can remember is "Something Stupid," which she recorded with her father.

3) Nancy recorded it on Reprise Records, which was founded by her father, Frank. Did your parents give you a leg up in your chosen career?
Well, first of all, I never had what people would call a "career."  I worked in secretarial positions for most of my life, never had a retirement plan, never had what most people have associated with a career.  My mother worked for Bank of America and my father for the postal service, so they were never in a position to give me a "leg up" in any way.  My father did insist that I go to college and become a teacher, though.  He said it was a cushy job where you were off every day at 3 pm. and had 3 months of vacation in the summertime.  Too bad he never learned how very, very wrong he was...and I knew I hated teaching.  I was very happy being a secretary.

4) Professionally Nancy has been involved in espionage, singing the theme to a James Bond movie and appearing in an episode of The Man from UNCLE. Do you enjoy spy/secret agent stories?
I love all that stuff.  I am a big NCIS fan and my very favorite episode there is a line where the agents ask Gibbs (Mark Harmon) what the medical examiner "Ducky" (David McCallum) looked like when he was younger.  Gibbs gives it some thought and then says "Illya Kuryakin," the character McCallum played on Man from UNCLE.

5) Nancy maintains the official Sinatra family website, which includes a link to the site of Mia Farrow. Ms. Farrow was, briefly, Nancy's stepmother, and obviously they are still on good terms. Do you have a big, extended family?
Yes and no.  My father was an only child and his parents were never on good terms with their siblings, so I know nobody on that side of the family--not even how many there are.  My mother is from a family of 10, which was very close growing up, and I have 32 cousins, but I don't know most of them.  My father hated my mother's family (called them "hicks from the sticks") and so we rarely saw any of them, except three of my aunts.  I was really only close to two of my cousins, both of whom died in the last five years.

6) Nancy's music -- and posters -- were very popular with the troops during the Vietnam War. Nancy continues to return their loyalty and affection with her efforts on behalf of the Vietnam Veterans Memorial Fund. Here's your chance to promote a cause that's near and dear to your heart. What charity gets your support?
I'll promote two.  The first is Compassion, International, a child-advocacy ministry that pairs compassionate people with those who are suffering from poverty. The ministry releases children from spiritual, economic, social, and physical poverty. The goal is for each child to become a responsible and fulfilled adult.  There is a big religious component to it, but as I am not religious, I ignore that.  I either sponsor or write to some 30 children in 13 different countries.  I have been doing it since 2009 and feel close to many of the children.
The other cause is the David Sheldrick Wildlife Trust, which rescues orphaned elephants whose mothers have died, mostly from illegal poaching.  They try to raise them to be returned to the wild when they are old enough.  I feel very strongly about the possible extermination of elephants for their ivory in my lifetime and am very pleased to be associated with this organization (check out the web site just to see the cute pictures of baby elephants!)

7) Nancy hosts a Sirius radio show devoted to her father's music. Do you have a subscription to a satellite radio or podcast network?
No.  But my son was a passionate fan of Sinatra and I'm sure he would have one if he were still alive.

8) Nancy has said that she and her sister Tina had a more comfortable relationship with their famous father than their late brother, Frank, Jr., did. Do you think it's easier for mothers to get along with their sons, while fathers have an easier time with their daughters?
That has not been my experience.  We had one daughter and four sons and I think we are as close to each of them equally.  Sometimes one of us is closer to one or the other for a specific reason, but overall, I think it is pretty even.

9) Random question: Tonight's dinner is on us. Would you prefer to eat at a casual restaurant with exceptional food, or an exclusive restaurant with so-so food but a celebrity clientele?
Definitely one with exceptional food.  These days I don't recognize celebrities, so going to a place with a celebrity clientele would be lost on me.  But actually any restaurant where I don't have to cook would be just wonderful.
Posted by Bev Sykes at 8:12 AM