The Ides of May

This has been a weird day, with little glitches throughout.

The only thing on the schedule was going to the dentist at 1 p.m., but when they called to ask if I could come at 2 instead of 1, suddenly I had time to Do Things.

Yesterday was the day when I found my mother sleeping at 1 p.m. and just left her laundry for her.  I really should go and make sure she actually is alive.  By the time I got to Atria (slipping in the back door), she was not in her room, but it was lunch time, so I just slipped out again.

There was lots of time before the dentist, so I stopped at Supercuts and got my hair cut, something it has been sorely needed for weeks now.  As she was shampooing my hair, my cell phone rang and started a long back-and-forth between me and my friend Ellen.  I didn't get her call, but checked later.  She wanted to know when a particular photo I had taken of her and her wife Shelly was taken.  I told her I didn't recognize it and didn't think I took it  I wont bore you with all the details, but the discussion is still going on and she still insists I must have taken it.

I was happy with the cut...I probably lost a pound, she cut so much off.  The last time I had it cut was right before we left for our Mediterranean cruise, so it was way overdue for a cut.

When I finished there I still had an hour and 15 minutes before my dental appointment so I drove out to Michael's craft store to pick up a few things I wanted.  Miraculously, I got out of there in 20 minutes and under $50.  I didn't have any lunch because I didn't want to "dirty" my teeth before my appointment.

I drove back to Cindy's and still had 20 minutes to wait, but I had brought a book, so I was fine with that--I'm always happy when I can sit somewhere where I don't have to do anything and can do some guilt-free reading.  I'm reading a free sample of Bob Hope's biography.  I saw the author on Theater Talk this week and it sounded fascinating, but the kindle version was not cheap, so I wanted to see if I really thought I'd read the whole thing (it's also quite thick).  While I am enjoying it, I probably won't buy it.  I think I will lose interest eventually.

Funny thing about Bob Hope (who, the author says sadly, stayed in the limelight too long).  Recently there was all this brouhaha about the Oscars -- I can't remember what anniversary it was, but one of the big ones. 50?  Lots and lots of talk about MCs over the years and was Carson better than Billy Crystal, and remember that really awful year, etc., etc.  In all the talk I don't remember hearing ONE person mention Bob Hope, who hosted the damn thing for nineteen years!  In fact, I remember wondering if Carson could live up to Hope's reputation.  It was kind of like ... can you have New Year's Eve without Guy Lombardo?  Can you have an Oscar telecast without Bob Hope?  And now nobody remembers him at all.

The teeth cleaning appeared to go well.  I really like Kristina, my dental hygienist.  We always get caught up on each other's lives when she's cleaning my teeth.  Cindy has posters on the ceiling, which rotate throughout the year.  This time it was this elephant poster, which I really liked (can't believe I found it on Google images!) 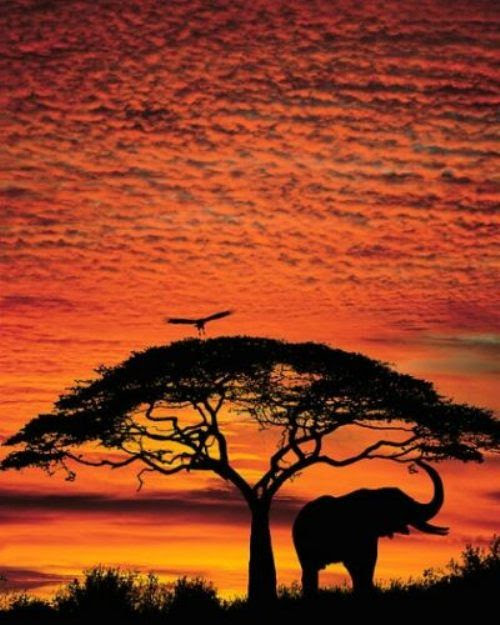 After Kristina had finished her cleaning, Cindy came in to break the news that I have a couple of small cavities and must come back in July to have them filled.  (She said that as a dental hygienist, Kristina is not permitted to tell me that, though she was the one who told Cindy that I had cavities).

From there I went back to Atria, where I found my mother sitting by the dining room and sat with her.  I wanted to get coffee, but you can't GET coffee in the damn place any more.  Forget about a cookie or something like that. I discovered that you also can't visit with my mother in the alcove there, especially on bad memory days, which today was.  When we are in her apartment, she spends an inordinate amount of time talking about the beautiful flowers in her apartment and the leaves on the trees outside the window.  With those two topics not possible, we had nothing to talk about at all.  I only stayed 15 minutes and then left.  The good thing is that she has no concept of time, so she had no idea that I stayed such a short time.

If she would ever...just once...not ask me who the cute little girls are on the back of my phone, I would be so happy, but it's like another knife in my heart every time to know that she has no awareness that she has great grandchildren, or that she has ever seen them.

At home, we had a refrigerator that was filling up with leftovers, so I just heated a shrimp, rice and kale dish for Walt and leftover mac and cheese for me.  We don't have a usable table for two right now, so he ate at the table and had brought down a TV table for me.  My bowl of mac and cheese was so hot, I bobbled it and turned the whole thing upside down on the floor.  To show how bad Kraft dinner is, not even the dogs wanted to eat it.  And I had a right regular good ol' tantrum, briefly.  I heated more mac and cheese and ate that.

Shortly after that, Walt was setting the coffee pot up to start at 6:30 in the morning and bobbled the cup that the coffee grounds go into and dumped them all into Polly's bowl.  He had his own mini tantrum.

Then I watched some TV and at some point went to check something OnDemand and the screen froze.  I could not get it to do anything, not even to turn off.  Normally, I would go into my office and watch the little TV, but the little TV is in the living room, and not plugged in.

So I came into the computer and worked on a project I've been working on since last night.  I finally got it to where I wanted to print it in Word Perfect, which tells me that the .jpg I was trying to use was not the right format.  I decided to print it from PhotoShop and it printed fine, but I forgot to indicate that I needed it in portrait orientation, not landscape.  When I went to run it a second time, the printer was out of paper and I realized I don't have a clue where my printer paper is.

That's when I decided this was not my day and the best thing I could do was finish this entry, post it (I hope) and hope that by the morning the TV would have fixed itself.
Posted by Bev Sykes at 1:16 AM