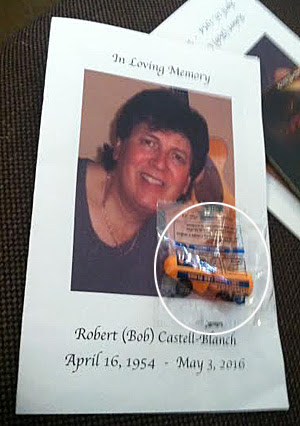 When we walked into the big hall, Walt and I commented that we had never been to a memorial service where they gave you ear plugs.

We were there for the memorial service for my sister-in-law Olivia's brother, Bob Castell-Blanch, who lost his long battle with cancer shortly after his 62nd birthday.

I didn't really know Bob.  Olivia is from a large family and though she used to have big dinners at Easter with both families attending, I never really talked with Bob because there were always others around and I mostly talked with my mother, who didn't know anybody and who felt uncomfortable around so many strangers.

In later years, when my mother started hermiting herself, I stopped going to those dinners entirely.  I would send Walt and I would spend the holiday with my mother, either cooking dinner for her, or taking her out to dinner.

What I remember about Bob, other than that he seemed like a really nice guy, was that he was an excellent musician.  He and Ned and/or Paul may have talked about music many years ago.  I remember when he brought his guitar along and got the family singing familiar tunes.

As I sat there at the memorial, I thought about how odd it was that we were there at all, and what a small world it is.

Some sixty or so years ago is when I first encountered The Lamplighters.  Walt and I ushered for just about every show in the 60s and we got to know "the regular" performers, from their performances on stage.  Two of the comprimario players, the second tier guys who may have a line or two, but who weren't talented enough to take the major leads, were Paul Hughes and Ray Castell-Blanch.

Many years later, when we were doing interviews for the Lamplighters history, I really wanted to interview those two guys who had, by that time, retired from performing.  I can't remember if I interviewed Paul or not, but I distinctly remember interviewing Ray, his wife, and their five white poodles.

Some time after that, Walt's brother Norm began dating Olivia and at some point I found out that her last name was Castell-Blanch.  I asked her if she knew Ray, and she told me he was her uncle.  Later, after Ray's death, at those Easter dinners, I got to know his widow a bit more.

So as I sat there at the memorial, I thought about how weird it was that sixty years after first becoming aware of Ray Castell-Blanch, whoda thunk I would be sitting with his family attending the memorial service for one of his nephews.

As memorial services go, it was lovely.  It began with a collage video and ended with a rousing, tear-jerking rendition of "Swing Low, Sweet Chariot," which was led by his daughter and others in such a professional chorus, joined by everyone in attendance.  Even though I didn't really know Bob, I was moved to tears by how beautiful it was.

Then came a video of Bob's last performance with his band, the PhDs.  His wife explained that he knew it would be his last performance and that he was feeling so ill he wasn't sure he would make it at all, but he did and the excerpt from the performance was riveting.  What a talented guy he was!  He had performed with many bands in the Bay Area and some names, some big, some not so big.  We found a framed copy of his ASCAP card with a record for which he had written the lyrics.

I am constantly amazed by how strange life can be.

Bob's band, joined by others, I think, performed on stage for people to dance.  It was very loud, and many people took advantage of the ear plugs. In fact, there were lots of packages of earplugs left as people were leaving and Walt and I picked some up.  We are often at musicals where the sound is just so loud that we have to put our fingers in our ears.  I think we both saw a lot of Motown the Musical last week with our ears plugged, wishing we still carried earplugs from our Lawsuit days.  Now we have some for the next big musical that wants to blast us out of our seats.

Before we went to the memorial, which was about an hour's drive from us, I stopped at Atria to deliver my mother's pills and her laundry.  I really should have done that yesterday, but put it off another day.

When I got there, her newspaper was still outside and when I knocked there was no answer.  I always fear the worst, and let myself in quietly.

I could see that she was still in bed, at 1 p.m., and tiptoed into her bedroom to see if she was alive.  I was happy to hear that she was snoring loudly, so I tiptoed out again, wrote her a note and left, hoping she'd figure out that the bag I left in her bedroom was filled with clean underwear.
Posted by Bev Sykes at 3:08 AM