Never Too Old to Learn

I watch a lot of the Food Network lately.  Heck, even Walt can recognize several of the chefs now.  I am particularly impressed, and somewhat intimidated by, the contestants in the children's competitions.  Those kids know more at age 10 or 11 than I know at age 73.  The little kids are teaching me terminology and techniques that I should have known for years.

The Food Network, combined with our Blue Apron subscription, which I am liking more and more, are both teaching me cooking skills I should have had years ago.  Who knew that a simple thing like waiting for oil to be HOT before adding meat, fish or chicken would significantly improve the final product?

Blue Apron is also getting me into the habit of creating a mis en place, getting all ingredients chopped, measured, and in individual bowls before starting to cook.  I was always the one unwrapping the meat while the chopped onions were turning too brown in the pan, or frantically searching for a measuring cup or spoon while the food in the pan overcooks.  Now I use lots of little bowls for the pre-chopped ingredients and the cooking goes more smoothly.

After all these years, I finally know how best to cook a slab of beef or piece of chicken and have it turn out the way I want...and not stick to the pan when I try to turn it.'

Thanks to Blue Apron, I have eaten more kale, chard and collard greens than ever in my life.  I'm still not going to make a kale salad or replace lettuce in a sandwich with kale, but when mixed in with other ingredients and cooked, I hardly even know it's there.  Last night's kale with purple potatoes, onion and apple was delicious.  (I will admit to still pushing aside beets though; I do have some standards to maintain.  That's OK.  Walt tolerates the onions I put in the recipes and patiently removes them all before eating)

Prior to Blue Apron, I never cooked fish and only occasionally splurged and bought a crab.  It's not that I don't like fish, but the prices just put me off.  I would buy cheap hamburger instead.  Now we are eating fish once a week, in all sorts of ways (this week it will be cod tacos -- for Cinco de Mayo, I guess) 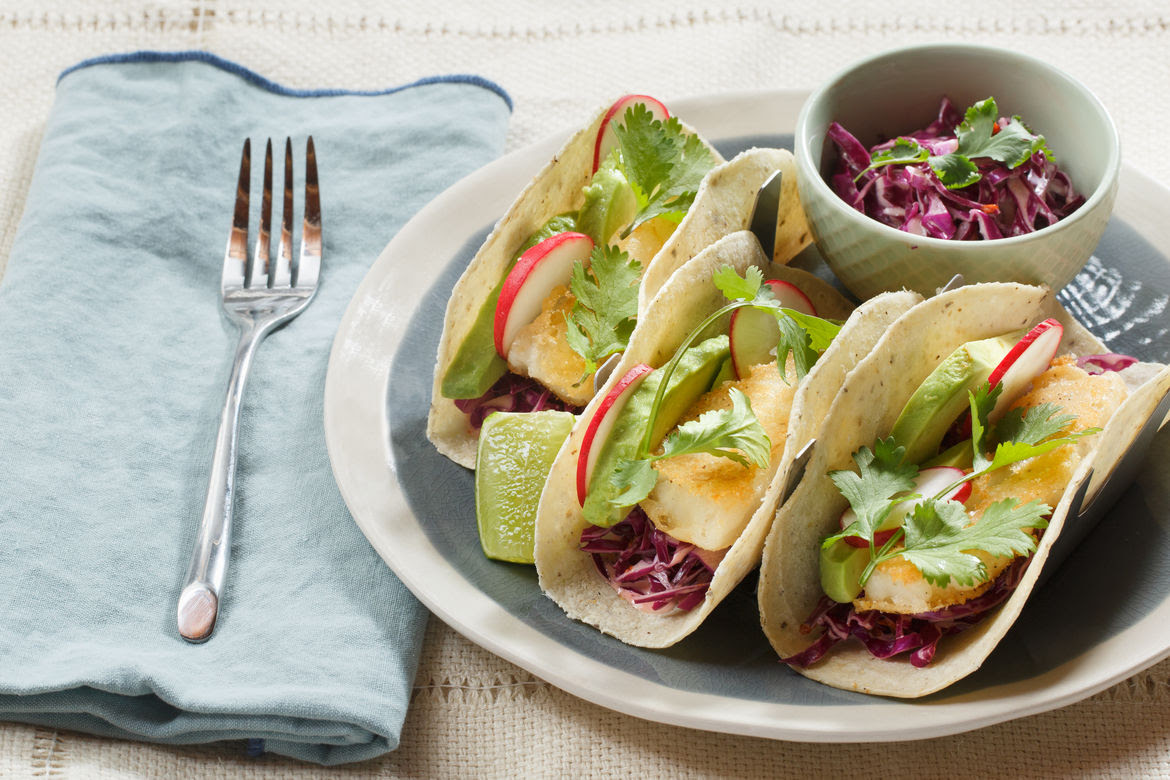 We’re wrapping corn tortillas around pan-fried cod, alongside creamy avocado, crisp radish and a delicious element that fish tacos picked up along the California coast: crunchy cabbage slaw. Our gorgeous slaw is infused with the smoky, robust heat of a chipotle pepper in adobo sauce (or a dried jalapeño marinated in a sauce typically made with tomatoes, herbs, spices and vinegar).

Blue Apron has introduced us to dozens of new recipes like Yuzu-Shoyu Soba with cabbage and Togarashi (a Japanese dish with soba noodles) or Za'atar Chicken and Pearl Couscous (an Israeli pasta dish).  I've learned that when they include a special spice packet and it warns "use as much of the spice blend as you'd like, depending on how spicy you'd like the dish to be," I should only use half the package, because the full package is MUCH more spicy than I would like to eat.

In the past, the starch on my plate has been rice, potatoes, or pasta.  Now I've added things like sweet potato, cracked freekeh ("an ancient grain with a deliciously nutty taste"), couscous (not the instant kind I buy at the supermarket) and faro (a mixture of grains of certain wheat species).

And plantains!  My goodness....plantains!  Where have they been all my life?  Oh, I knew them, of course.  Even ate them a few times when visiting my friend Melody, whose significant other was from Nigeria.  But now I've had them fried and discovered that mashed they are a great potato substitute.  In fact, thanks to The Food Network, I'm making something called an "enchilasagna" for Cinco de Mayo tomorrow.  It is a quasi lasagna made with layers of corn tortillas fried in coconut oil and layered with salsa, cheese, and fried plantains.  It will either be delicious, or we'll send out for pizza.

I like that Blue Apron includes a card called "from the farm" which either gives you information about a specific ingredient in your parcel, or tells you something about the local farm from whence it comes.

For so long I have been so incredibly bored planning and fixing the same thing night after night, but watching Food Network and cooking Blue Apron meals have given me a new lease on my cooking life.  I even used a $100 Amazon gift certificate recently to buy a top of the line frying pan.  I've always gotten the cheap kind and replaced it with another cheap one when it began to wear out, and I have discovered that you get what you pay for.  This new pan is like night and day from what I have been using for years.

I won't say I wouldn't like to go out for dinner every night instead of cooking, but at least I'm now enjoying both cooking and definitely the finished product more than I have for many years.
Posted by Bev Sykes at 8:48 AM