The Happiest Place on Earth

We do not have a good history with Disneyland.  Disneyland was where Paul, Ned, Jeri, Marta and the rest of Lawsuit learned that David had been in an auto accident and was going to die.

Disneyland was where I spent the most horrible day with one of our worst foreign students, who made it so unpleasant that I ended up driving home, the 8 hours or so because I didn't want to spend a penny on a motel for that ungrateful guy (years later he wrote to me and asked if I remembered how I had "ruined" his trip to Los Angeles).

Today in the continuing clean up (which involves looking at thousands of old photos), I came across photos from a high school jazz choir trip to Disneyland. 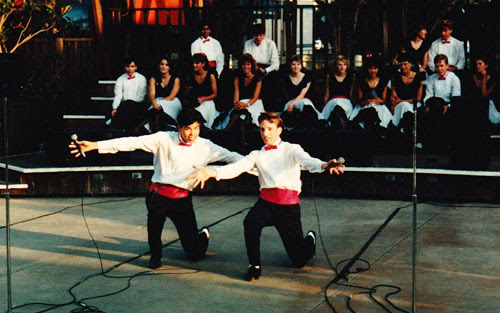 Kag (Paul Kagiwada) and Paul at the
Disneyland Hotel

Now you can't spend a day in Disneyland and not have happy memories, but my feelings, both years we went was colored by watching the thousands of folks paying exorbitant entry fees to go and spend the day there.  Our group was going in by the back door (but told not to look at any of the "magic" being created in the big barns), where they would then sit around for half the day, i.e., no playing in the park, until time to perform, and PAY THE FULL ADMISSION PRICE!  What they got for missing half an entire day in the park, though paying full admission price, was a coupon for a free hamburger and drink at the Carnation cafe.

Can you imagine how much Disney makes in one day from admission?  They couldn't even give a reduced price to people who were coming in to perform? 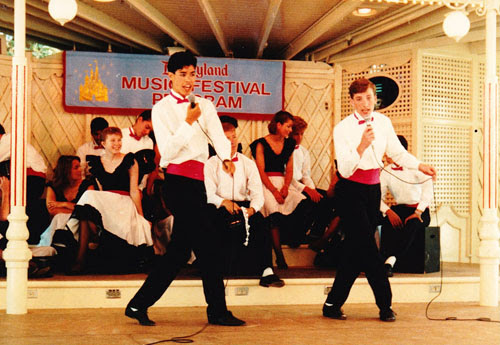 Kag and Paul performing in the park itself

We do have good Disneyland memories.  It's where we took each one of the kids between their 4th and 5th birthdays, a chance to have one on one time with each child away from all the siblings.  Those experiences were golden. 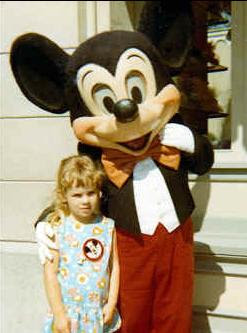 But when I think about Disneyland today, been there, done that.  Don't need to do that again.  And I'm sorry that Disneyland had some part in "helping" me to develop that feeling.

The more I "clean up" the more memories like this surface, as I go through these old photos.  I'm wondering how these happened to be put into the boxes that they were.  Today I found photos of my grandparents when they were dating, pictures of newborn me, school pictures of all of our kids, various Pinata gathering throughout the years, and countless other things that were jumbled together in no order, with no rhyme or reason.  To truly "clean up" I would have to spend a month "organizing" photos.  At least separate the black and white from the colors, throw away duplicates (and there are SO MANY duplicates as a result of taking all of my father's stuff, Walt's mother's stuff and my mother's stuff.  But that is not going to be a part of THIS clean up.  I'll worry about that later, when the office is "organized" or whatever it's going to be after this clean up is finished.
Posted by Bev Sykes at 1:46 AM

Email ThisBlogThis!Share to TwitterShare to FacebookShare to Pinterest
Labels: Disneyland