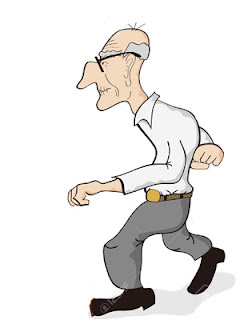 I watched Walt walk across the family room the other night, headed upstairs to go to bed, and I saw my grandfather.  He was walking that "old man walk" that is so familiar around Atria and which I remember made my father so angry, the older my grandfather got.  I remember when my father, too, did the old man walk (and he died a year younger than I am now.)


Now, truth be told, there is a lot of exaggeration involved when Walt does the "old man walk," but it's not all exaggeration.  There's the slumped shoulders, the protruding hips, the foot shuffle, the bowed head.  It's hard to figure out what is real and what is for effect.  (He does, though still have his own teeth and all his own still-mostly-brown hair, unlike this illustration.)

I understand that.  I do my own version of the old man walk when I'm here alone.  When I'm out in public, I stand more erect (or as erect as I can get with this sloping back) and try to step out as briskly as I can (realizing that my idea of a "brisk walk," which often leaves me winded, is someone else's idea of a shuffle!)

But when I'm home alone, I find that it's easy and more comfortable to settle into the old man shuffle as I walk from one end of the house to the other.

The "old man walk" is not necessarily a function of age. Heck, I walk that way far more than my mother, except on days when her back is really bothering her.

The days...the years...pass by so quickly the older you get and it's hard to realize that you have passed into "old age."  Even Jeri, at 50, is past "middle age" unless she plans to live to hunnert, as others I know do.

We don't realize that we can't do everything we did even 20 years ago.  At the memorial service on Sunday, after the formal service, they cleared away the chairs to make room for dancing.  Here is Walt, 76 years old, in a group of people he does not know, most of them significantly younger than he is, starting to pick up and carry chairs.  Force of habit from all those years helping out after Lawsuit concerts and theatrical events!  I told him he was old and could let the younger people handle the heavy lifting!

It always makes me nervous when he's out climbing a ladder somewhere, remembering that he has fallen once, and he was more "bounce-able" then!

Sometimes you are brought up short by comments that make you realize...hey....the 70s are starting to get old.  I listened to some guy on the radio the other day talking about a video called "Elders react to Beoncé - Lemonade."  You may find it amusing.

The thing that got me, though, was the conversation between these two commentators, laughing hysterically at the reactions of the people in the film and talking about how hilarious it was.  One of them thought calling the people "elders" was insulting and asked "can't we find something more polite to call people over 65?  OVER 65???????  I remember many years ago when I was 65.  I was "elderly" then, apparently.  Now I would think I have one foot in the grave, if I didn't have a nearly 97 year old mother more sprightly than I am.

It's all so relative.  Yesterday there was a woman who probably had been sitting with my mother until I took her seat (I didn't realize she had been sitting there).  She had collected leaves and wanted to be sure that we knew she had picked them up off the ground and didn't steal them.  She was hard of hearing and kept saying that she couldn't be expected to hear right because she was 93.  I didn't bother to try to tell her my mother, whose hearing is just fine, is 97.  Her dementia was quite a bit worse than my mother's.

Then this morning there was a guy outside The Today Show with his family, having the time of his life in New York City...at 102!  How I long to see the sparkle in his eyes back in my mother's again.  She was always so lively, so involved, so interested and excited about everything.

I don't think of myself as an old lady yet -- unless it's convenient to be one (to get a seat on the bus, for example!) but I realize that by the standards of most people around me, at 73, I am probably on my last legs.  I just pray that when I reach my 90s,  I am with it enough to still enjoy life, to find excitement in things around me, and to enjoy Bri and Lacie's children.  I hope I still remember everyone's name, even f I do walk the old lady walk. 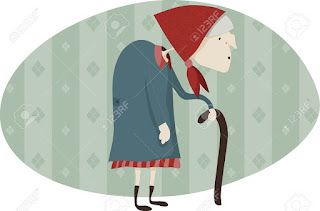 Email ThisBlogThis!Share to TwitterShare to FacebookShare to Pinterest
Labels: old