It should come as no surprise that "cleaning" is going slowly.

I'm doing a bit every day, but every box I start to go through gets sidetracked.

In the years when I first knew him, Walt lived in an old house in Berkeley, which was owned by the priests of Newman Hall on the other side of campus.  It was going to be torn down when the new building project was ready to start.  In the meantime the Newman Center could make a few bucks out of the 7 guys who lived there for a year or so. 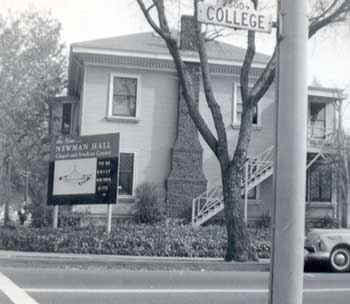 We called them Inn-mates and I became the house cook.  I didn't really like living in the dorms and when I learned that the guys didn't know how to cook (nor did I, actually, but I was willing to learn), I ended up cooking for the group five or so nights a week (we had lots of breast of lamb which, in those days, could be found on sale for 25 cents a pound!)

If the house were not going to be turn down in a year or so, it probably would have been condemned.  I remember the kitchen slanted.  Once it flooded and all the water ran down into the low corner of the room and out the small hole someone drilled in the lowest spot.

It had one thing I just loved, which was a huge walk-in pantry.  Oh to have something like that here!  In the pantry there was a closet where the guys would keep gin for me, since I loved gin and was underage.  But it was also a "mailbox" between Walt and me.  For 25 cents a pound you could get breast of lamb but you could also get greeting card, and I left a card a day in there for him.  (When he decided to give me his pin to wear, he left that in the closet too).  I don't know if I saved all of the cards, but a whole book full of them.  They have all long since lost their ability to stick to the page, I discovered when I opened the book yesterday.  I could have tossed the whole thing in the garbage and Ned would have been so proud of me, but I took time to sit down and read all of those corny cards.  What's even more interesting are the things written inside of them, most of which concern drinking and/or gin.  I was a big drinker in those days and today, when I rarely drink anything but water, it's embarrassing to see how big a role "gin" played in my life.

I did throw the scrapbook away, but kept the cards, some of which I think I can use for pocket letter projects.

I also found a binder of old copies of the "Hot Flash."  Throughout my life, I think I have created newsletters for every group of which I was a part. The "Hot Flash" was the newsletter I designed for the ob/gyn office for which I was transcriptionist (and later office manager).  The newsletter was pubished monthly for three years.  I skimmed through some of the issues and...damn, I was sometimes a good writer!  At the end of 1994, for example, I wrote a 7 stanza poem detailing all of the things which happened to the people in the office ovedr the year.  This one was about daughters, and grandchildren:

With blowing and panting and hullabaloo
Little Miss Natalie made her debut.
PM and RM are grandmas again
And Judie decided to marry her swain.
Lynne gave a luau when Meredith turned one
As hostess, our doctor is second to none.

I haven't decided if I'm going to keep these yet or not.  Probably.  I'd like to go back and read more of them. That office was such a wonderful place in which to work, and totally destroyed when it got taken over by the Big Corporation. It's nice to remember the good old days, when we all liked each other and had fun together.  When we joined with six other medical offices and moved into the new building, I started a newsletter then too, called "The Well," but that never really took off.

I also came across the first Albert Peyson Terhune book I ever read, "Lad, a Dog."  I went on to read all of Terhune's books (and think I have most of them).  I think this particular book is a duplicate and so it went into the "take to Logos" pile, but I had to take time to read the first chapter (it's a book of short stories) and by the end of it I was sobbing, as I did the first time I read the book.  I decided not to read further!

Then there was "The Book of Reflections," by Marie L. Scott Broderick, my aunt.  Marie is my mother's oldest sister and probably the one she knows the least.  She was grown and gone long before my mother was born.  I actually only remember meeting her once or twice.  I have lots of weird relatives, but Marie may be the weirdest.  She claims to have been visited by a being she calls "Bertie" (who I think is supposed to have been Queen Victoria's husband) and this nearly 400 book tells the story of their interactions and her meeting with just about every famous person in the world, including folks like Abraham Lincoln, Lenin, Daniel Webster, Henry Kaiser, etc.  I've tried to read it, but it reads like so much gibberish to me.  I have the book because my mother had it and I think I rescued it when we moved her to Davis.  Why, I have no idea.

I offered it to the family on the family group on Facebook and the granddaughter of my cousin Ken said she'd like to have it.  "I don't believe that anyone in my part of the family has a copy and we would love to read it! I'm one of Ken Eckstein's granddaughters. I don't know who Aunt Marie is but I love to read and am always interested in a bit of family history!" she said.  I told her it wasn't exactly a family history, but she wants to anyway, so I'm going to give it to a niece who is more likely to see her than I am.

By the time I'd done all this, I'd finished half a box and added more to the garbage can, but it was time to think about cooking dinner, so that's all that got done.

Slowly, slowly.  It's difficult to decide which pieces of your life to throw away and which to keep.
Posted by Bev Sykes at 8:33 AM