Sandy wasn't there today and another woman was working for her.  What an officious person she was.  I had brought in two bags of books and had intended to unload them and choose one to read, but she very nearly didn't want to let me in the back room, even though I told her I was there to work for the afternoon.  She absolutely REFUSED to let me unload the books.  She had to do it herself.  She may be a very nice person, but she definitely did not make a good impression on me.

This was like the inverse of last week.  Last week Sandy had a very boring morning and I had such a busy afternoon I didn't even have time to read.  The morning yesterday was very busy and I had a calm afternoon, with little bursts of busy.  But overall, we made over $300, so it was a good day.

My first customer today was the guy I have called the commuter, since for several weeks he would race in, grab a book and race out again to catch a train.  Today he had no train to catch, so he was free to browse.  He bought a thick book and complained that the other book he was interested in, at $5, was too much.

An interesting looking asexual person walked in.  Long straight black hair, perhaps a hint of facial hair and a bit of acne. Dressed all in black, with jewelry.  I kept glancing trying to figure out if this person was male or female.  I finally decided probably female until check out, when the voice seemed to be very deep.  I'm still not sure!  He/she bought a book called "Etymologicon"

An American guy wearing a Colombia t-shirt looked at the foreign language books then left without buying anything.

A guy bought what looked like a great coffee table book of black and white dog photos.

A tall African American guy in a basketball shirt with "Curry" on the back bought two books by Toni Morrison.

We were very low on $1 bills.  I texted an SOS to Susan because we were also low on quarters and I was afraid I was not going to be able to make change.  Susan texted me back, but my damn phone never lets me know when I have a text message, so I didn't realize she had answered until she called a while later.  By that time, I had mined my own wallet for dollars and the morning woman returned with two bags of donated books and ten $1 bills.  We were fine until the end of the day. 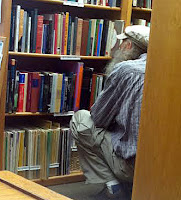 The tall guy I call "Pete Seeger" came in.  He's such a pleasant person.  He gave a cheery wave when he entered, spent a long time hunkered down at the music section and ultimately didn't buy anything this time, but left with a cheery wave again.

A couple came in and the woman picked up a card for the Beer Fest Walt is coordinating.  I texted him (he responded; my phone didn't let me know).  She left the card behind when they walked out, but several other people also picked up Beer Fest cards and I talked with one guy about it  He had been there a couple of years ago and may go again this year.  It's a fund raiser for Citizens Who Care, which provides social support services to Yolo County adults and their family caregivers.

My friend came in at 4:30 and bought "The Shape of Content" by Ben Shahin, which discusses meaning and form in contemporary painting and offers advice to aspiring artists..  He got a good deal.  I found it on Amazon, used, for $50. He paid about $4.50.  He also picked up a big book called "Stage by Stage," which he wanted me to put on hold for him.  He says it's part of a trilogy and if he can find the other two books, he will buy it next week.  Later, when Susan came in and I told her about the book and gave it to her to save for him, she said that it had been donated by our friend Stephen, who had invited Logos to his house to pick up all of Larry's books, after his death, though I think this particular book had to have been Steve's.

A mom with a sleeping baby in a stroller wandered around the store, ending up in the kids' room, while pushing the stroller back and forth in the aisle.  Ultimately she did not buy anything.

Another guy I described as "young middle age" looked at the music section for a long time.  He eventually brought me a book to ring up for him, for which he paid with a credit card.  When I looked at the card, I saw it was the son of our kids' late high school music teacher, the beloved Dick Brunelle, for whom there is now a theater named in his memory.  I think the last time I saw his son he was probably 2/3 the height he is today.  He told me he hears Ned on the radio from time to time.  I had to let him know that Ned no longer works for the radio station.

A guy looked for a book on origami for his younger brother who loves it.  He didn't find one, but did find two book of cartoons, one a Dilbert and one another one.

A zaftig mother and daughter bought a bargain book, a couple of mysteries and two books of Japanese instruction.

Finally a guy who is a good friend of Susan's came in.  He bought a bargain book and a book about Art.  Susan came in before he left and there was a lively political discussion, anti-Trump, which another customer who happened to be browsing joined in enthusiastically.  I shared that I've decided Trump has become the "teflon Don" and that he really is right that he could stand in Times Square with a gun and start shooting people and it wouldn't matter.  No matter how heinous his former activities have been, whom he has offended, what scary promises he has made, what lies he has told (Politifax has checked his speeches and give him a 91% rating for false statements!) his popularity only increases.  He dismisses his former sexual proclivities as unimportant since it was so long ago, yet continues to make Bill Clinton's of major importance.  He continues not to answer questions, but to bulldoze over any interviewer and turn the conversation in the way he wants to to go.

He is a scary, scary man.  I am feeling more sympathetic towards the German people who brought Hitler to power because I see now how it was done.
Posted by Bev Sykes at 7:40 AM