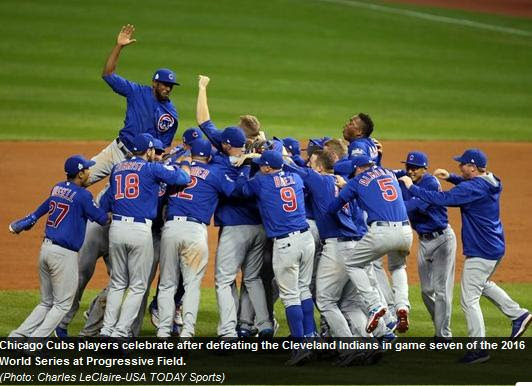 If truth be told, I'm not really a hard core sports person.  I have "my teams," the Giants and the 49ers -- you can't live around this family and not -- but I don't "follow" sports as religiously as, say, Tom and my brother-in-law do.

I'm the kind of person who watches the last inning or quarter of a game when my team is winning.  I like to see the exciting finale.

I have not watched any games of this year's World Series, but I even though I never cared about the Cubs before in my life (and Ernie Banks, in his day, was the bane of my existence), I couldn't help rooting for the team whose last chance at the big prize was 108 years ago.

My "rooting" for the Cubs this year did not extend to actually watching a single game, though I did, at some point in the evening, check the score for that day's game.  While I was thrilled when the Cubs won the first game, my heart sank when they were down 1 game to three and it seemed the Indians were going to take it all, but rejoiced again when they picked up the net two games to tie the series.  Even at that, with this being the finale game, win or lose, I didn't turn on the game until Walt started coming downstairs to tell me what was going on.  By the time the score was tied and the rain started, I had to stop cooking, turn off what was already on TV , and turn on the game.

I don't think there is a single person, Cubs fan or Indians fan, who would say this was a boring game!  It had just about every exciting thing you could hope for, including a 15 minute rain delay in the 10th inning, and when the Cubs made that last out to win the series and the entire team burst onto the field, I had tears streaming down my face.  I'd never paid attention to the Cubs before, but my heart was so full to know that finally they had won a World Series. 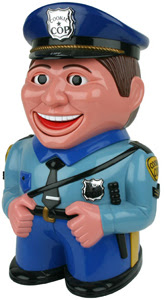 Having confessed my relationship with sports, I must make another true confession.

Alice Nan and Joe have this cookie jar that they have had for years.  I think someone (it might even have been someone in this family) gave it to her long before they were married.

The thing that makes it unique, in addition to the fact that you rarely see cookie jars that look like policemen, is that when you tip the head back to get a cookie, it commands in a loud, obnoxious voice "Stop!  Move away from the cookie jar!'

I guess it's a great thing to have if you are serious about watching your weight, but there is absolutely NO sneaking any cookies with this guy around.  The whole house knows you are checking the cookie jar. whether you take a cookie or not.

When I was at Alice's this week, all by myself, she had left a note about various things in the house I might want to eat, including a note that the cookie jar had Girl Scouts lemon cookies in it.  I'm not really a big fan of lemon cookies and I hate the sound of that damn policeman, so I never looked in the jar to get a cookie.

But it was sitting on the counter next to the coffee pot, which was right by the electrical outlet.  When it came time to recharge my cell phone, I reached between the coffee pot and the cookie jar to plug in my electrical cord and in so doing, I knocked the head of the cookie jar and it fell open.  "Stop!" cried the police man, for what would be the last time.

Somehow in knocking the head over, I had somehow damaged the mechanism and silenced him.
I anguished over that all week.  To tell Alice or not to tell her and let her think it had finally worn itself out.  In the end, I did the honorable thing and as I was leaving the house, I turned, like Colombo, for "one last thing" and confessed to her that I had broken the cookie jar and that it no longer had a voice.

I went to show her what I'd done, showed her how I'd gone to plug in my electronics and then said that I had knocked the head back.  In explaining it, I opened the voiceless cookie jar and it aid "Stop! Move away from the cookie jar!"  So I hadn't broken it after all and leaving it alone for 2 days (and not trying any of the lemon cookies) had somehow "fixed" whatever I did to it.

I was very relieved.

I went to Atria in the morning to have lunch with my mother.  She was pleased to see me and even seemed to realize that I hadn't been around in several days, though she didn't remember visits by Alice Nan and Joe, Ned, or Walt.  But we had a nice visit and I went with her to lunch.

Her laundry basket was overflowing and she had been folding up dirty clothes and putting them in the bag that I use to carry her dirties home with me to wash.

The bag was piled high when I left and I could see that she was out of underwear, so I will go over again in the morning and take her all clean clothes which will last her another week.  Now that she is getting assistance with dressing, the aids or choosing clothes in her closet that she has not worn in years, and the clothes she takes off are actually getting put in the hamper when they are dirty, which is a refreshing novelty.

For once I had lots to tell her when she asked "what have you been doing that's exciting?"  I told her about my trip and told her cute things the girls had done, and what they had done for Halloween, about their costumes, about how cute it was watching both girls helping both Tom and Laurel cooking dinner, and how tired I had been on the drive home and when I finished she asked "so are you going dancing tonight?"

I guess life is back to normal again.
Posted by Bev Sykes at 1:24 AM