I've been one of those people who was never bothered by time change.  Spring forward, Fall back...it was all the same to me.  I went by what the clock said (and the fact that times change on Saturday night instead of Sunday night makes it all easier).  I've also not been someone affected by time changes when traveling.  When we get on on a plane, I set my watch (if I'm wearing one) or my mental clock to the time it will be when we arrive and I barely notice jet lag.

The jet lag thing started to affect me a year or two ago.  Suddenly I noticed it.  Must be age.
But still clock changes were no problem.

It's always a problem for the dogs.  They are incredibly polite in the morning, being very quiet and staying asleep until I start to move about in the recliner.  Truth to tell, I fake them out. I often wake up half an hour or more before I let them know I'm awake

But each of them, one at a time, will quietly walk over to the recliner.  I watch them through almost closed eyes and I breathe deeply and slowly.  They look at me, sigh and go back to where they were sleeping.  The second I touch the lever on the chair that will sit me up, they are up and jumping and barking and thrilled to see I am awake.  I suspect Lizzie's main happiness is to see me.  Polly's is imminent food.

But dinner is a whole different story.  I love Springing Forward because they aren't bugging me to eat at 4 or 5 p.m.  They are content to wait until 7 because they don't know what the clock says.
The Fall Back this year has been hard on them.  They start bugging me about dinner at 3 and I can barely make it to 5 before they are so antsy I have to feed them.

This year, to my surprise the clock change has affected me.  The last two days, mornings seem to drag on forEVer.  And I start yawning, thinking surely it must be near my normal bedtime...only to discover it's only 9:30.  I went to sleep when I was sleepy last night...and then was up at 1:15.

It will all iron itself out eventually, I know, but this is the first year that I ever remember being affected by it.  Hell to get old!

I went to Atria yesterday.  I wanted to find out how my mother was after yesterday's "incident" but mostly I wanted to speak with the person who will be in charge of billing the long term care insurance for her assisted living fees.  I had been told she works on Monday.  But she doesn't.  (Typical of how information gets passed along ... or not passed along ... at Atria!)  So I will go back today.  I have been told she works today.  We'll see...

Then I went down to the apartment, never knowing what I'm going to find.  I always check a few things...if the newspaper is still outside the door, that's a concern, but lately I think she's forgotten that she gets a newspaper.  Then I open the door quietly (I don't knock any more) I peek in and see if the bed is made or if she is in it.  Then I check to see if the curtains have been opened.  Finally, I check the couch to see if she's there.

So the newspaper was outside, but the bed was made and the curtains were drawn.  I thought maybe she was still at lunch, but no, she was asleep on the couch.  Well, not actually asleep, but lying on the couch, very subdued.

We talked for our usual hour and what was going through my head the whole time is ... I can't imagine what it's like to be her.  To never wake up in a familiar place.  To sit in her living room and recognize nothing around her.  When I tell her things, I've noticed that if she doesn't understand, she points out how beautiful that arrangement of artificial carnations I bought for her a year ago is, or the workmen outside and how they started last week and she hopes they finish soon.  Those are her fall-back safe topics.

I told her several times about her trip to the ER yesterday and her frustration is that she doesn't remember it.  I told her time and time again that she was out of it; of course she doesn't remember.  Then she thinks she's stupid because she can't figure out what is going on.  I pointed out that the doctors can't figure out what is going on, so she shouldn't be surprised that she can't...then I asked her if she had ever had medical training

To keep the conversation going between long gaps of nobody saying anything, I talked about the election, trying to keep it very simple and very short, but she said "I can't understand a thing you are saying."

I miss the mother I used to talk politics with. 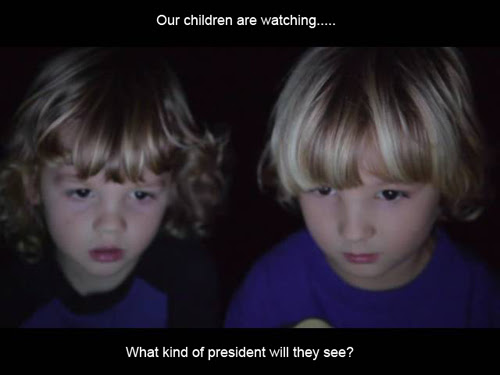 My head tells me to stay busy and keep the television off, but I've been so obsessed with this election, I know that is not likely to happen.

I thought about getting gin and tonic, but really I don't drink any more.  I'll have to make it on comfort food.

We watched talking head last night projecting results and when I read about the importance of the "battleground states" I always wonder if California...in fact, the whole of the country west of the Rockies....is chopped liver.  Look at the important states and there is nothing on the left side of the map.

But I'll go cast my vote for all the democrats, and all the propositions, and then head over to Atria.  So I'll avoid at least part of the talking heads today predicting what's going to happen.  Things seem to be pointing to Hillary, but then I remember this famous photo..
. 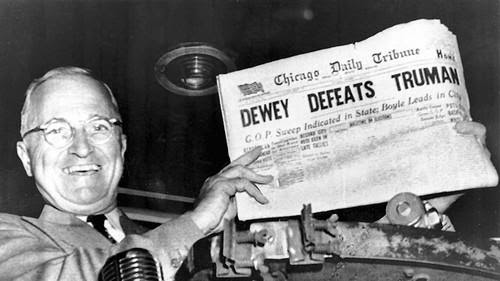 and I won't relax until it's all official.